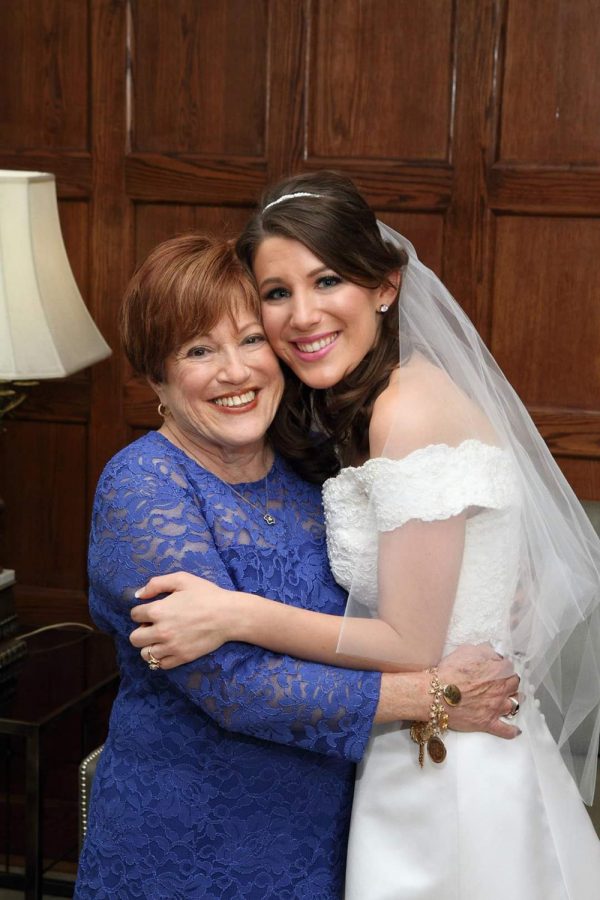 Becca Near and her grandmother Gail Hawkins at Near’s wedding in 2014.

Becca Near said her grandmother, Gail Hawkins, wanted a party rather than a funeral when she died.

And she wanted her ashes scattered into the ocean from a cruise ship.

Both requests will have to wait because of restrictions on social life and travel during the coronavirus pandemic.

But Near, development associate of the Young Professionals Division of Jewish Federation of St. Louis, said the abnormal period of mourning has made her feel like the death is “not real. It’s like she is not really gone.”

As people die — and soon perhaps in greater numbers because of the virus — their friends and relatives in the Jewish community are having to adjust to diminished funerals and periods of sitting shiva, the Jewish tradition in which friends and family comfort the bereaved.

“It’s been really difficult. In Judaism, you are meant to be surrounded by a community, you are meant to be talking about the loved one and sharing stories and really being with family and comforted, and we don’t have that,” said Near, a member of Young Israel of St. Louis, a Modern Orthodox congregation.

Hawkins, 76, was “extremely vivacious and loved being around people,” her granddaughter said. She was also a competitive, skilled bridge player and teacher.

Once a year, she devoted a day to baking mandel bread for the whole family, and she had a secret chopped liver recipe that Near and her family are hoping to recreate for Passover.

Hawkins told her family that she wanted to be cremated, which is not allowed in the Orthodox Jewish community.

“I wasn’t exactly comfortable with it, but we wanted to respect her wishes,” Near said.

Unable, for now, to honor Hawkins’ desire for a “celebration of life” with family and friends, Near and her immediate family instead used the Zoom videoconferencing platform to do a small memorial service and shiva gatherings.

“A couple [friends] asked about her and her life, and that was wonderful, and people said a lot of really gracious things” during a virtual shiva gathering “and so for those two hours, there was that comfort,” Near said.

But Near’s mother, Angie Rosenberg, found sitting shiva via Zoom “the most awkward — and not because of the people — it just was uncomfortable.”

Friends have dropped off trays of food at Rosenberg’s door and then called to let her know, in order to avoid contact. And unlike when her father died, Rosenberg also didn’t follow the Jewish tradition of covering her mirrors during shiva because she couldn’t actually host a gathering at her home. She says she has felt disconnected from the usual Jewish chain of events following a death.

Rosenberg also recalled how her mother, who was “fiercely independent,” would say, “You should be able to take care of yourself no matter what, under any circumstances.”

And yet now living with her three dogs, Rosenberg said “even though my phone doesn’t stop, and I am video chatting and people are reaching out by every means — my friends and family have been amazing — I literally have never felt so alone in my life.”

The pandemic has not only altered end-of-life events for mourners but also for the people who work in the industry.

Richard Stein, location manager at Berger Memorial Chapel, said he has been in contact with local rabbis who are advising people to hold private graveside services in the immediate and a public gathering at a later date.

“That puts shiva in a strange place — that’s something families are concerned about; they don’t get to meet with friends at the time when they really need them,” said Stein, who is in the fourth generation of his family to run the Jewish funeral home.

People largely have been following the social distancing guidelines, though Stein did say that 30 people showed up for a funeral service despite his earlier instruction that it was restricted to 10 people.

“We didn’t ask them to leave — I don’t know that we would have the authority to do that. I wasn’t at the service, but I think people tried to space out. It’s something we would try to avoid,” he said.

Anita Feigenbaum, executive director of the Chesed Shel Emeth Society, lost her mom on March 13 in Cleveland. She and her sister, who has a compromised immune system, sat shiva together at her sister’s home in Ohio “with very strict guidelines on the door,” she said.

Feigenbaum, who oversees the cemeteries in University City and Chesterfield, is well acquainted with the impact of sitting shiva.

“Everything we do is very communal,” said Feigenbum, “and so this inability for us to gather in groups and have the support that we need communally makes it more difficult to mourn.”