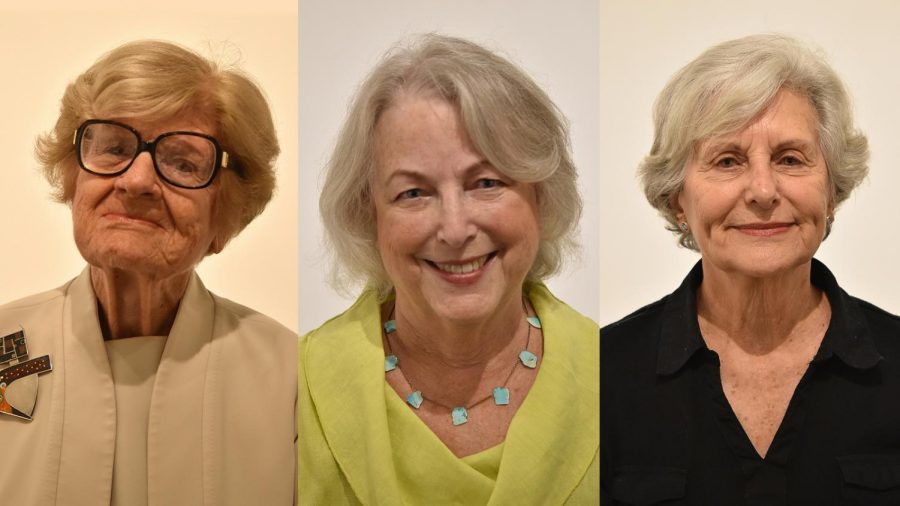 Editor’s note: This is a more complete story of a version that ran online earlier this month.

One familiar refrain we women of a certain age hear is that we’re invisible. It’s not that anyone actually says that out loud, but we feel it from the looks we get, or lack of them. We can be present, front and center, and yet no one seems to notice us. It’s infuriating.

Marian Brickner is a woman of a certain age, too. Eighty-four, to be exact. The Central West End resident knows more of her life is behind her than ahead, but that doesn’t get in the way of her pursuing innovative photography projects that bring her — and, frankly, so many others — joy.

Much of her career has been spent photographing animals and insects, and for that she is internationally known through images on the covers of publications and even on billboards in the French countryside.

This time, Brickner aimed her lens at a different subject: St. Louis women from age 63 to 105. She took portraits of 57 of them, and was joined by Susan Fadem, 72, an award-winning journalist and freelance writer. Fadem provides an accompanying “word portrait” about each subject in 77 words or less.

“Everything that has a body has a life,” said Brickner, who describes herself as a “nonpracticing Jew” and has six children and seven grandchildren. “What I wanted to illustrate is that they have a life and are living their life, and sublimely.”

The genesis of the project came about four years ago after Brickner photographed roughly 50 older nuns at the Sarah Community, which is a faith-based, long-term care and retirement community in Bridgeton. It was begun through the collaboration of five Catholic religious congregations of women.

“Time went on, and I wanted more old women to photograph,” Brickner said, laughing. “I’d keep asking people when I would meet them in the park, ‘Do you know any old people, women?’”

When a picture of Brickner appeared, or more precisely,  reappeared on Facebook, Suzy Farren favorably commented on it. Brickner got in contact with Farren, and the two met for coffee.

It turned out that Farren, who is retired, had worked as vice president of communications for SSM Health and in that capacity, interviewed Brickner’s late brother. He was a New York-based doctor who helped revolutionize community-based health care.

At their meeting, Brickner explained her interest in photographing older women, and a lot of them. She maintains that when you photograph a number of similar subjects and display them as a group — be it dogs, praying mantises or older women — our brain takes a few extra seconds to study and digest the images.

“I told Suzy what I really want to do is photograph a bunch of old women, but I don’t schmooze right,” Brickner said. “She basically told me she is a gourmet schmoozer and that she could do this.”

So Farren, 72, who has pursued visual art since retiring, signed on as project manager.

Farren contacted friends, friends of friends, women she knew and women she knew of. Many were artists like her or had worked in the arts, though the women chosen reflect a diversity of races, ethnicities, socio-economic backgrounds and even ages, when you consider the span from 63 to 105.

Fadem, who is Jewish, said she got involved the minute Brickner told her about the project. The two had become friends in 2011 after Fadem moved to the Central West End and ran into Brickner delivering her then-latest book to the Schlafly Branch library.

“We got to talking and I said, ‘You would make a good story.’ And we’ve been friends ever since,” said Fadem, who wrote about Brickner for the Jewish Light in 2017.

“When Marian told me what she was doing, I said, you can’t get together this group of women without interviewing them. There is a repository of wisdom here.”

Fadem spent from five to 35 minutes interviewing each woman before or after Brickner took her picture.

Brickner explained that her goal is always the same: to illustrate individualism. She photographed the women at the St. Louis Artists’ Guild in 2019. She prepared for the shoots by visiting the space several times to gauge the natural light at different times of day and decide where to place the chair for each portrait session.

“I wanted each woman to be looking down at me just a tinge,” she said. “I’m looking at the 8-year-old girl in your face, in your eyes. That’s what I am seeing.”

That the lineup of women photographed contained some St. Louis heavy hitters was not lost on Fadem. Among several notable Jewish women were civic leader Carolyn Losos, documentary filmmaker Jill Evans Petzall and Lynn Hamilton, founder of Maturity and its Muse.

“Some of the (57) women had been through very serious situations, like seeing parents die at a younger age,” said Fadem, who now lives in St. Peters. “Some talked about wishing they could have told their 40-year-old self to take better care of their body.

“One woman had moved to St. Louis to be treated for an eating disorder and to repair the loss of a multidecade marriage. She had rediscovered herself as an artist, and this is how she is living her recovery.”

The exhibition, which is presented by Hearding Cats Collective, a St. Louis-based nonprofit dedicated to the promotion of artists, was supposed to be on display last year but the pandemic postponed that plan. Fadem said that when the women came together for the opening in late July, the impact was “staggering.”

“Not only was it a reunion of sorts, but an affirmation that we made it through the last two years,” said Fadem, adding that one of the women, Norma Borlinghaus, died at age 105 a few weeks after her photo shoot. Her text story consisted of only seven words:

“The surprise is that I’m still breathing.”

To watch an online video of Brickner and Fadem discussing the “Her Self” project, visit https://bit.ly/her-self