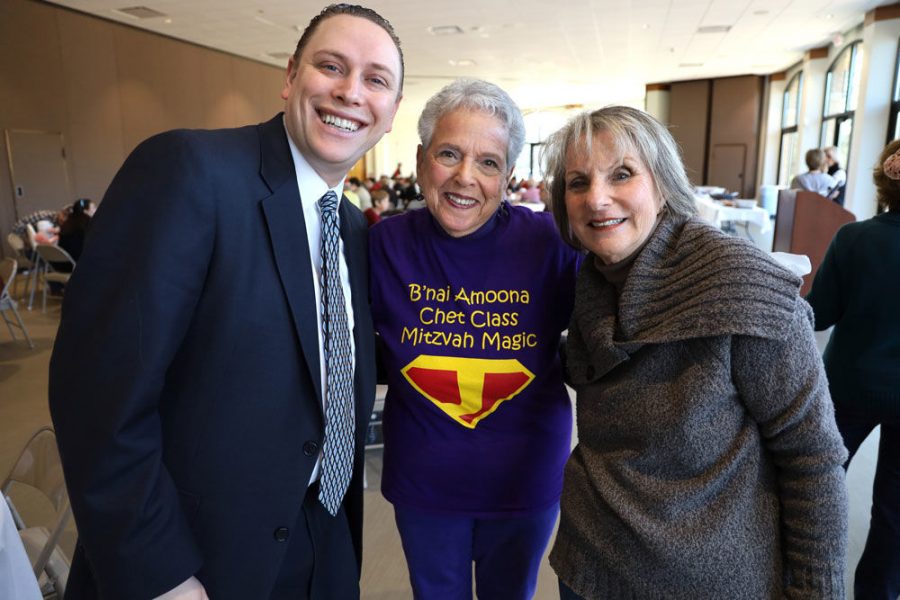 You don’t often see rabbis on business journals’ 40 under 40 lists, but Rabbi Jeffrey Abraham made the San Antonio Business Journal’s list in 2018, which was a first for a clergy member.

Despite that recognition of his success in Texas, Abraham recently decided to leave Congregation Agudas Achim for a rabbinic post at Congregation B’nai Amoona. He starts July 1.

Abraham, 37, spoke with the Jewish Light about his time in San Antonio and what led him to accept the position at the Conservative synagogue here. His responses have been edited for space.

What led you to B’nai Amoona?

My wife, Lauren, and I had made the decision about four months ago that we were going to be leaving San Antonio, where we had been for the last six years, and not because we haven’t enjoyed the synagogue or San Antonio. The Jewish day school in San Antonio unfortunately closed a couple of years ago, and we have three boys, 9, 7 and 2, and we really made the decision that we wanted to move to a city that had a really vibrant, viable Jewish community day school.

I will preface that with saying that I am not always a believer in fate, but a lot of times I am. I happened to be going in the second week of December to the [United Synagogue of Conservative Judaism and Rabbinical Assembly] convention in Boston and, unfortunately, there are no nonstop flights from San Antonio to anywhere in the northeast, so I had to switch planes in St. Louis.

By total chance, as I was waiting at the airport to switch planes, Rabbi [Carnie] Rose and [B’nai Amoona] president Jeff Singer and Liessa Alperin, [director of innovative learning and engagement] were heading to Boston for the same conference. In the moment it felt not so lucky, but in the end, it was great. Our flight ended up being delayed for three hours. We ended up talking for the whole three hours, and I told them that I had decided I was going to be leaving San Antonio.

I knew Rabbi Rose from other conferences, and they all perked up and said, “What incredible timing. We’re looking for a new associate rabbi as well.” And so one thing led to another and by the end of the conference, Jeff Singer was telling me, “We really want you to consider coming to B’nai Amoona.”

I ended up doing a couple of Skype interviews with their committee, and they had us out in mid-January. We really fell in love with the synagogue and community.

I have also done a lot of outreach in the larger community, working on different interfaith projects and trying to bring the whole community together around issues that we can all agree upon and not letting the politics of our day divide us.

Why were you able to grow Agudas Achim when other Conservative synagogues are shrinking?

I think the biggest thing in today’s world to succeed, especially as a Conservative synagogue but I think synagogues in general, is you have to meet people where they are. You can’t just stay within the walls of the synagogue and expect that people are going to come knocking at the proverbial door and say, “Tell me about your synagogue.” I am now at every community event you can imagine trying to meet people. I’m hanging out a lot in the lobby of the JCC, just places where you might meet people and just building on those conversations. It’s really all about relationship building.

What was some of the interfaith work that you are most proud of?

We built a really great relationship here with the Muslim community. We do this really phenomenal event with them every year during Ramadan when they do Iftar, their version of break the fast at the end of each day.

We have this event on Saturday night where we come in and have a dialogue about Jewish-Muslim relations. We allow people to ask questions and to meet each other, and we always play a little music from our different groups, and then we break the fast together. We always let them of course go through the line to get food first because they are fasting and we aren’t. We enjoy time together, and at the end of the night, we end with Havdalah, which has really been a phenomenal way to bring our cultures together.

I have also worked on the Keruv Initiative, which is really reaching out to interfaith families to get them or keep them involved in the Jewish community. You can look at all the polls and rates of Jews marrying non-Jews, so it’s important to not only accept that as the new normal of the 21st century but to actually really do outreach and show them that our synagogue is a place where they can feel welcome and very much a part of the community, so their non-Jewish spouse isn’t going to feel alienated.

The Conservative stream does not allow rabbis to officiate interfaith weddings. What are your thoughts on that?

There was a ruling about a year and a half ago that allows Conservative rabbis to attend an interfaith wedding, and I think that has been a very positive step. Even though I may not be the main officiant, I can still be there to show my support.

Most millennial couples are not coming to a rabbi to officiate their wedding, whether they are interfaith couples or even Jewish couples. A lot of times it might be the parents or grandparents that are pushing that. But my experience is that I meet a lot of these couples long after they have gotten married, and I play the role of welcoming them in once they start having children and are looking for a spiritual home of some sort. I have found it important to be really open and welcoming beyond the actual wedding ceremony, which is one day out of their whole lives.