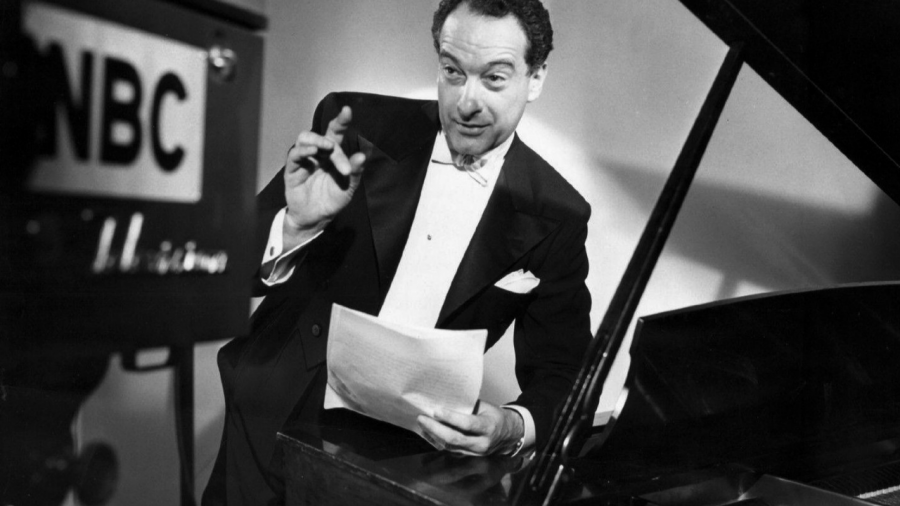 Victor Borge, born Børge Rosenbaum, was a Jewish Danish humorist and musician born in Copenhagen. He learned piano at the age of three, and it was soon regarded as a prodigy. By the age of 8, was giving full piano recitals. In 1918 he was awarded a full scholarship to the Royal Danish Academy of Music.

After a few years playing classical concerts, he developed what would become his tradmark stand up comedy act, with a signature blend of piano music and jokes.

In 1933, he married American Elsie Chilton, and started touring extensively in Europe, where he began telling anti-Nazi jokes.

More On Victor Borge
When the Nazis overtook Denmark during World War II, Borge was playing a concert in Sweden and managed to escape to Finland. He traveled to America on the USS American Legion, the last passenger ship that made it out of Europe prior to the war, and arrived in America on August 28, 1940. Disguised as a sailor, Borge managed to return to Denmark once during the occupation to visit his dying mother.

Borge quickly managed to adapt his jokes to the American audience, took the name of Victor Borge, and, in 1941, he started his American career at Bing Crosby’s Kraft Music Hall.

Borge won the title “Best New Radio Performer” in 1942. Soon after the award, he was offered film roles with stars such as Frank Sinatra.

Borge appeared on Toast of the Town hosted by Ed Sullivan several times during 1948, and became a naturalized citizen of the United States the same year. He started the Comedy in Music show at John Golden Theatre in New York City on October 2, 1953. Comedy in Music became the longest running one-man show with 849 performances when it closed on January 21, 1956.

Borge played with some of the world’s most renowned orchestras and was invited back to his native country to conduct the Danish Royal Symphony Orchestra at the Royal Danish Theatre in Copenhagen, Denmark in 1992.

Victor Borge continued to tour until his last days, performing up to 60 times per year when he was 90 years old.

Borge died on September 19th, 2000 in Greenwich, Connecticut, after more than 75 years of entertaining.