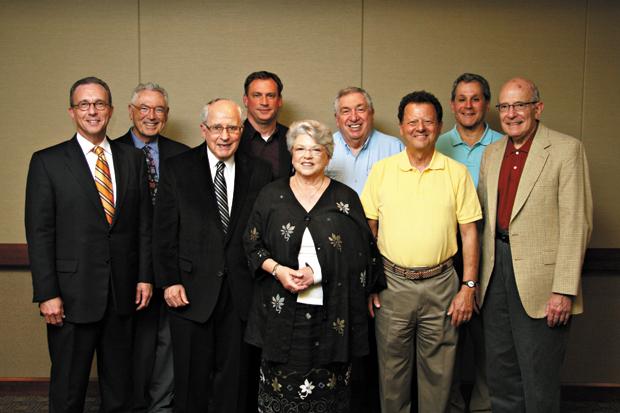 Barry Rosenberg, President and CEO of the Jewish Federation of St. Louis, congratulated CAJE — a beneficiary agency of the Federation — on “40 years of exceptional service to the St. Louis Jewish community and the Jewish people.”

He said CAJE’s mission is closely aligned with two central priorities of Federation’s strategic plan, to ensure Jewish identity and engagement of future generations and to serve and build a community that is attractive to young adults and young families with children.

Rosenberg noted that “at a time of diminished resources” the 2012-2013 allocations included a 30 percent increase in “restricted funding” —  for targeted CAJE programs that address Jewish identity and engagement (see related story on page 1). He said he looked forward to working with CAJE president Marcia Moskowitz and executive director Sonia Dobinsky, along with other lay and professional resources to “significantly deepen the partnership between Federation and CAJE and broaden CAJE’s impact in both Jewish education and identity.”

CAJE president Marcia Moskowitz, who was elected to a third one-year term in office, said the agency “has prided itself on its ability to understand the educational needs of the St. Louis Jewish community and then to respond to them.”

“The one constant has always been and will always be the commitment to Jewish education, believing as we do that by providing opportunities for life-long Jewish learning, we ensure the flourishing of the Jewish community,” she added.

Looking towards the future, Moskowitz said CAJE will try to expand and strengthen programs connecting the community to Israel and focus on serving the whole spectrum of ages in the community.

Harvey Greenstein, a past president of CAJE, presented a detailed history of the agency, going back to its roots in the old Associated Hebrew Schools of St. Louis, formed in 1923. Greenstein noted there have been 18 lay presidents of CAJE, starting with the late Louis Zorensky. There also have been four professional executive directors: the late Dr. Louis Schwartzman, followed by Rabbi Howard Graber, now director emeritus and Jeffrey Lasday, who served until he was succeeded by Sonia Dobinsky, the current executive director.

“Education is why, I believe as a people, we are still around,” Greenstein said. “Learn from history, do it and the Jewish future is sound. Here’s to the next 40 years and many, many more. Let’s do our job and CAJE will continue to soar.”

Dobinsky said the agency is using its 40th anniversary to reflect on the agency and ways it can improve, “looking at what needs to be modified and changed…As we form our vision for our future, we will continue to strive for big ideas.”