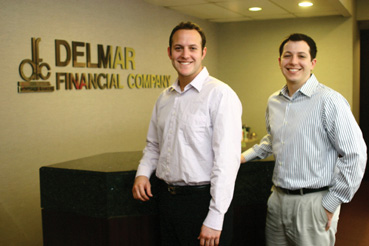 Brothers Matt and Henry Levison may be under 30, but they’re already at the top of their game in the home loan business at Delmar Financial.

Part of their business acumen may come from their experience literally growing up with the mortgage business. It was their grandfather, Saul Mirowitz, who co-founded Delmar Financial with his brother, Carl Mirowitz, in 1966.

Matt Levison, 29, has worked with Delmar Financial since he was in junior high (at the young age of 13), and he wasn’t the only family member taking part in the business.

“Basically all of our family has worked there at one point or another,” Matt says. He continued to work at the family business during the summer, winter and spring breaks while he earned his B.A. at Miami University in Ohio, and worked throughout the semester attending Washington University, where he earned his MBA.

At the end of 2005, Matt Levison and his business partner, Keith Maddox, a long-time employee of Delmar Financial and Matt’s first boss, bought the company from Matt’s grandfather, and Chairman of the Board Saul Mirowitz and the estate of the late Carl Mirowitz.

Henry Levison, 23, also had a history of working at Delmar Financial, working during his high school years (both brothers are graduates of Parkway Central High School) and during summers while he was home from studying at Indiana University, where he earned his B.A. After working the commercial side of the real estate business with THF, Henry came back to work full-time with his brother.

Henry said Matt has been his “mentor” since Henry started originating loans in August.

“It’s just been great having this mentor/brother who has been doing this for 10 years. It can always be interesting working with family, but I can’t think of a better person to learn from,” Henry said.

And Matt is extremely pleased with his brother’s aptitude for the business.

“Henry’s learned in a few months what it took me probably three years to learn,” Matt said.

Delmar Financial has about 30 employees, and is headquartered in Creve Coeur, near I-270 and Olive Blvd. The company also has branches in South County, Quincy, Ill., and most recently, a branch in Cleveland.

Matt says that since he and Maddox bought the company, they have managed to improve and grow the business.

“We’ve increased our originations 200 percent from the previous two years, and we’re hoping to do the same this year,” Matt said. “It’s worked out better than I ever thought it would have.”

The Levisons attribute the growth to their customer service and to the fact that they have increased the number of options for customers. “We don’t rely heavily on advertising, so much of our business comes in from word-of-mouth,” Henry said, which depends mainly on the customer service offered and the competitiveness of their offers.

“We treat our customers really well, and they tell their friends about us,” he said.

Matt said the company has also increased the number of financing options and services offered in the past couple of years.

“Now if there’s anything home loan related, we have no reason to refer people to others. We can do it all in-house,” he said.

The brothers say they are also very conscientious about providing the best value possible for their customers. They said that some home finance companies have damaged the industry’s reputation by using predatory lending and sub-prime offers that give borrowers quick cash, but also saddle them with untenable debt loads that they can’t pay off.

Matt said that Delmar Financial works with each customer to make sure that their loan will work with their budget, which at times means advising clients to take out a smaller loan, even if their credit score would permit a higher one.

Matt and Henry say that working with family hasn’t found any work-related problems or arguments their passion for sports and fantasy sports, some sports-related quarrels have come up.

“We’re both in a fantasy basketball league and we found out that we’re going to be facing off in a championship coming up, ” Matt joked.