Brennan, graber are honored at NHBZ 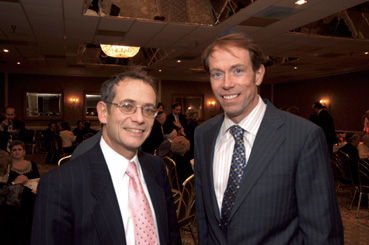 Brennan, graber are honored at NHBZ

BY VICTORIA SIEGEL, SPECIAL TO THE JEWISH LIGHT

Charles Brennan, renowned radio personality at KMOX 1120 and one of America’s top 25 “most influential radio talk show hosts” as named in USA Today, could not have imagined when he was an altar boy in Cleveland that one day he’d be receiving the Man of the Year award from Nusach Hari B’nai Zion (NHBZ) in St. Louis. And, during the Holocaust, when Felicia Graber was hiding on a farm in Poland with her mother, under the guise of false Aryan papers, she never could have dreamed that she’d be named Eishes Chayil (Woman of Valor) decades after the war ended.

But on Sunday, Dec. 3, at the Crowne Plaza Hotel in Clayton, 175 members and friends of NHBZ honored both of these individuals for their contributions to the Jewish people and their impact on their communities.

“Both Charlie and Felicia share uprightness, attention to morality and an ability to cut through what’s not right in this world,” Menachem Szus, president of NHBZ, proclaimed from the podium. “She lived through it and he talks about it.”

As a child survivor of the Holocaust, Graber knows the horror of hatred and divisiveness too well. Yet, she has not allowed this dark time in history to define nor bind her. She became a teacher, a rebbitzin, and dedicated her life to education. Along with her husband, Rabbi Howard Graber who was executive vice-president of the Central Agency for Jewish Education (CAJE), she made learning and studying a priority in her community. In 1999, she founded the Hidden Child/Child Survivor Group of St. Louis. This once-a-month group meets to give this unique assemblage of survivors a safe place to share stories and be among others who understand their history. Graber is a docent and speaker for the St. Louis Holocaust Museum and Learning Center, and lectures at various schools and colleges. She has tutored New Americans and volunteered as money manager for the Jewish Family and Children’s Service. Her writings have been published in various magazines and newsletters as well as in The First Harvest and New Harvest. Graber is a contributor to And Life is Changed Forever, an anthology about child survivors.

“My parents were the original examples of ‘No Child Left Behind,'” Steven Graber said when introducing his mother during the program. “However, my mom never did anything at the expense of being a mother.”

As testament to Graber’s dedication to her family, both of her children, their spouses and all eight grandchildren braved the hazardous weather conditions of the past weekend and flew into St. Louis just in time for the banquet.

“We didn’t have power until today,” Graber explained, “and we were supposed to have a big family Shabbos but we got snowed out and it didn’t look like they would come at all.”

But her daughter from Cleveland and her son from Baltimore put their mother’s concerns aside and made sure their families would be with Felicia when she accepted the award.

“This is one time I’m glad they didn’t listen to their mother,” Graber admitted from the podium. Graber’s dedication to family also extends to her NHBZ family. “The women we have honored have been long-time members of the shul and have worked diligently for us,” Sandie Abrams, executive director of NHBZ, explained. “Felicia has served on the board of directors for NHBZ and also was vice president as well as secretary.”

Trudy Sudin, speaking on behalf of Rebbitzen Chani Smason during the presentation, highlighted Graber’s intellectual background and stellar career of teaching as well as her devotion to her family. “She has been a faithful partner of her accomplished husband, moving from continent to continent, state to state.”

On accepting her honor, Graber said: “I feel that this award is almost overwhelming. I feel humbled and honored and thrilled.” She thanked God for allowing her to live to this day and acknowledged her blessings of the congregation, her husband, her children and her grandchildren. She emotionally suggested that the Eishes Chayil belonged to her mother who smuggled her out of the Tarnow ghetto and kept moving in order to keep her daughter safe.

Brennan was selected for the Man of the Year honor because of his commitment to the State of Israel and the Jewish community.

“Charlie Brennan is an individual who is very well known in the St. Louis community not only in the Jewish community but the community at large. Mr. St. Louis as he is called,” Rabbi Ze’ev Smason explained. “The members of the Jewish community are very appreciative of his pro-Israel advocacy particularly several years ago when he went to Israel and was honored for that by the JCRC and other organizations.”

Smason commended Brennan for his even-handed reporting of events taking place in the Middle East as well as being “an all round mensch and good guy.” He stressed that the selection committee felt it was important to honor and highlight a person who is pro-Jewish and pro-Israel. To add to the honor, this is the first time a non-Jew has been named Man of the Year. “He is a positive voice for Israel that’s not a Jewish voice, and a voice the St. Louis community really respects,” Abrams added.

Dave Ervin, vice president and general manager of KMOX (whose wife Andrea couldn’t attend the banquet because she was in Los Angeles where she returns once a month to volunteer as a docent at the Museum of Tolerance at the Simon Wiesenthal Center), introduced Brennan by highlighting some of the notable personalities Brennan has interviewed as well as the contributions he has made to the St. Louis community. He has interviewed everyone from Bob Hope, David McCullough and Neil Diamond to James Michener, Jay Leno, David Letterman and Al Gore. He received an Outstanding Achievement Award from the East-West Gateway Council of Governments for raising money to plant flowers in downtown St. Louis. His series of broadcasts on delinquent buildings in the city compelled Mayor Francis Slay to expand St. Louis’ Problem Properties Court. Brennan founded Rediscover St. Louis, a not-for-profit corporation to mark historic sites with informational plaques in Downtown St. Louis. He received the 2004 Norman Stack Award from the Jewish Community Relations Council and has been a moderator and speaker at the annual St. Louis Jewish Book Festival. The list of his accomplishments and contributions is extensive and includes national and regional recognitions.

However, it is his advocacy for Jewish issues and his live broadcast during his trip to Israel that caught the attention of NHBZ. During his acceptance speech, Brennan recounted what he saw and experienced during that trip and expressed his belief that more people need to visit Israel in order to understand it. In particular, he commented on his interview with President Jimmy Carter last week and the president’s controversial book by saying “I think President Carter needs a little more empathy for the Israelis; it’s important to walk in someone else’s moccasins as the old Indian saying goes.”

During his visit to Israel, Brennan saw a school that had been hit by a terrorist attack and posited what Americans might do if a similar situation happened in the U.S. He recounted the procedure an ambulance must go through before entering the emergency room of Hadassah hospital: it has to be searched for bombs and the patient has to go through a metal detector before receiving treatment. “I learned from a mother that when a class takes a field trip to any city except Jerusalem or Tel Aviv, for every eight children there must be one armed parent,” Brennan said. “And if the class trip is in Jerusalem or Tel Aviv, the ratio is one armed parent for every four children.” He emphasized that of the 21 nations that surround Israel only two recognize it. Brennan proposed that by going to Israel you see things from the other side.

He encouraged all Americans to visit Israel, whether Jewish or not. “Non-Jews would appreciate it,” Brennan said, “because they’ve been studying the history in their Bibles and also because of the experience they’ll have there.” He encouraged Americans to spend their dollars in Israel especially since some companies don’t want to do business with Israeli companies because of pressure from European countries or fear of inventory shortages from terrorism. He stressed that visiting Israel is “not so much for Israel as for our own education.”

Brennan was presented with Birkat HaBayit, a blessing for the home that he shares with his wife Beth and their two children, as well as a Proclamation from the mayor of St. Louis honoring Brennan for his work on behalf of the Jewish community, declaring Dec. 3, “Charlie Brennan Day.”

In summing up the evening, Rabbi Smason hoped that the attendees would walk away from the event hearing the message of the honorees to live a good and righteous life, bothe qualities Charlie Brennan and Felicia Graber represent.