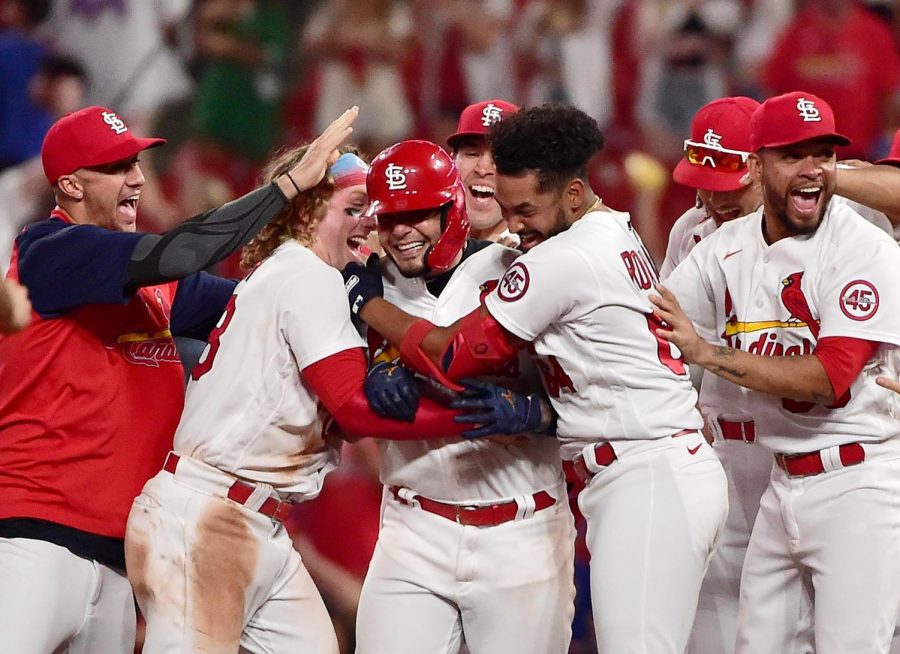 Could they blow the game two games in a row?

The thought entered my mind as Giovanny Gallegos entered the ninth inning with a fragile 2-1 lead at Busch Stadium Wednesday night. The Cardinals had brokered the lead through a late rally, powered by Dylan Carlson’s RBI double. But St. Louis closer Alex Reyes was down for the evening, his arm healing from a bad night on the job Tuesday, where the team blew a 6-1 late lead. When it comes to the 2021 Cardinals, doom usually comes before the cart and the horse.

Gallegos blew the lead, but the Cards recovered and won the game in 10 innings. Are you ready for another round tonight?

The Cubs and Cardinals aren’t really flirting with playoff baseball at the moment; more like two expensive teams trying to stay above the respectable mark. Coming into the series, one would have thought this could be a sweep, but baseball often plays with our emotions. St. Louis demolished the Little Bears, 8-3, on Monday to continue their revival… before Tuesday’s loss pushed them back. Right when all hope was going to be lost, Yadier Molina was the savior as midnight loomed.

Starting the runner on second base in extra innings may have been one of the dumbest ideas that Major League Baseball could come up with, but it worked in St. Louis’ favor this time. With Paul Goldschmidt on second, Nolan Arenado drew a walk. Molina came to the plate with only the need for a single. Perhaps a wild pitch to advance the runners–or something more to liven the wounded spirits of Cardinal Nation. Kimbrel fired a pitch to the outside portion of the plate, and Molina took care of the rest, bashing the ball to the right field wall in a scene that reminded me of David Freese’s triple in the 2011 World Series. This one didn’t help bring the team their 11th championship title, but it helped ease the fog that Tuesday’s loss created.

Baseball can be a treacherous game to follow for these exact reasons. Take the past few days of St. Louis baseball. With the deadline less than two weeks away and decisions on the roster pending, the Cardinals defeated San Francisco to kick off the homestand. They follow that up with an 8-3 bruising on Monday, and then comes the Tuesday meltdown. Now, if someone asked if this latest comeback win-a 3-2 triumph that felt like giving blood and pulling teeth at times-would launch them into another streak, I’d say pump the brakes.

Big wins don’t launch teams into streaks. A collective ability to execute plays and deliver timely contributions does. It’s one of the oldest tricks in the books: wrapping a normal win up in Christmas gift paper. The reality is that the Cardinals could come out tonight and get blasted by Chicago, a common foe that seems to bring out the good, bad, and ugly in St. Louis. These two teams have played five times over the past 15 days, and every other game seems to require bourbon instead of beer. Each team is flawed, beaten up by injury, and disappointing fan expectations.

But let’s look at a few bright spots. Most of the lineup is hitting. In addition to Goldschmidt’s hot summer resurgence, Carlson and Harrison Bader are swinging the bat very well. Miles Mikolas is right around the corner for a return, and Jack Flaherty is close behind him. Molina continues to set new records and come up big for his team, while infuriating a portion of the fanbase who thinks he should sit a few more games out. While little is going as planned, it’s not all bad downtown. St. Louis is back even at 48-48 and have won seven of their past eleven games.

What this week’s games with Chicago should prove to us is that the Cubs are still capable of giving the Cardinals a good shove, and that St. Louis is capable of pushing back against the brink of total fan despair. Nothing changes in a good rivalry, especially one going back decades and several rows of incredible players. While it’s easy to be driven mad by the unpredictable nature of this team, I am beginning to walk into each game knowing little of what could happen but knowing the heartstrings and nerve endings will be worked over.

The Cardinals didn’t blow two horrible games in a row. That’s the good news. The bad news is that they could blow today’s game. That’s baseball. That’s the ride, each and every year. Can the Cards take advantage of a soft upcoming schedule? We’re about to find out.