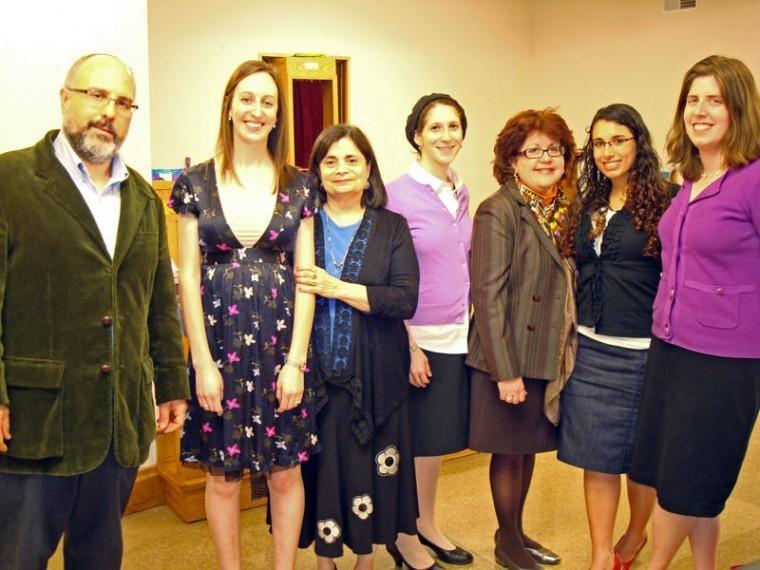 By Victoria Siegel, Special to the Jewish Light

Orthodox feminism. To some, the phrase might sound like an oxymoron, but to a vocal contingent within the Jewish Orthodox community, a feminist movement is indeed alive and growing,

In fact, since 1997, the Jewish Orthodox Feminist Alliance (JOFA) has been working, according to its mission statement, “to expand the spiritual, ritual, intellectual and political opportunities for women within the framework of halakha [Jewish law].”

It was with this goal in mind that a few leaders of New York-based JOFA were in St. Louis earlier this month to present “Ta Shma: Come and Learn.” Organized by a committee at Bais Abraham Congregation, around 50 men and women heard scholar Sara Tillinger Wolkenfeld’s speak about “A Daughter’s Recitation of Kaddish [the mourner’s prayer].”

Customarily in Orthodox Judaism generally only the men recite Kaddish. According to some sources cited by Tillinger Wolkenfeld, there is nothing in Jewish law to indicate a woman can’t say the prayer. Instead, the tradition of only men saying it has been based on customs that have varied through the years from community to community and from shul to shul.

“I was surprised at how popular a custom it has become and how tenacious a practice it’s become,” Tillinger Wolkenfeld said about her discoveries of how Kaddish is recited while she was researching the topic. “When you have a law on the books you can look it up. But if it’s a custom, it’s complicated. Kaddish is a custom and customs change over time.”

Part of the debate, she explained, has to do with the purpose of the mourner’s prayer. Historically, the rabbinic pushback was to de-emphasize the prayer because it shifted the focus away from doing good deeds and onto elevating the deceased’s soul. One Spanish authority said it was ridiculous to think that Kaddish or anything else would have an effect on the souls of the dead.

Tillinger Wolkenfeld said that the meaning of Kaddish is to sanctify God’s name. “It shows that your parents raised you to be the type of person who would say Kaddish.”

Rabbi Hyim Shafner of Bais Abraham said it sounded like Kaddish wasn’t for mourners, but was recited after Torah study to sanctify God and said in Aramaic, which was the common language at the time. “It was important that Kaddish be accessible to everyone,” Shafner said. “That’s why it was made in Aramaic. That’s why it’s important tov rabbis now that women be allowed to say Kaddish if they want. Commentators say that’s why it was in Aramaic so it would be accessible to all.”

The presentation on Kaddish was part of a reading series that examine various topics affecting women’s obligations and involvement in ritual life. The first two guides are: “May Women Touch a Torah Scroll?” and “Women’s Obligation in Kiddush of Shabbat.” The guides can be found at www.jofa.org; click publications.

JOFA is presenting the Kaddish series at only four cities in the United States. The organization selected St. Louis because of Phyllis Shapiro, Bais Abraham’s president and the first female president of an Orthodox synagogue in St. Louis.

“Phyllis is a role model for the Jewish Orthodox feminist movement,” said Karen Sponder, program director for JOFA, “and an inspiration to me. Very few Modern Orthodox shuls in this country have a woman president.”

Shapiro said that Bais Abraham is a natural partner with JOFA. “Our philosophies converge on many levels, like our views of women’s leadership and participation in Jewish ritual life within Jewish law,” she said.

Is there a place for feminism in Orthodoxy?

Rabbi Shafner thinks there is. “Throughout Jewish history there have been strong female, Jewish leaders,” he explained. “Devorah was the judge of the Jewish people. Barak was under her direction. There were seven female prophetesses.”

However Shafner also answers the question with an additional question: Does that mean men’s and women’s roles should be the same in the way that Orthodoxy sees roles?

“It’s not always great for women or for men to have exactly the same roles. It doesn’t mean women don’t have an important voice, they do. If they’re not involved we miss their insight because they have a different insight,” Shafner said.

Shapiro explained that Orthodox Feminism finds areas where there can be more full participation of women that do not conflict with Jewish law. “There are areas where there is no conflict but the restrictions have been put there because of society and culture not for halakhic reasons,” she said.

Shapiro said the beauty of Orthodoxy is that it’s always changing, albeit slowly. However, she does see signs of progress. For example, the speaker from JOFA was a case in point: “Forty years ago you did not have young women with that breadth and depth of Jewish knowledge. It is just a joy to see a woman at such a level of scholarship,” Shapiro said.

Another indication of women’s changing roles is the community-wide women’s megillah reading that crosses over all synagogues. In fact, a group of Orthodox women is writing a megillah. Shapiro also points to the celebrations of bat mitzvahs in the Orthodox community and how those are changing to allow young girls to do significant learning and speaking to the community about what they’ve learned.

Dr. Amy Fox Griffel, associate professor at Albert Einstein College of Medicine and vice president of programming/education for JOFA, said the alliance is seeing an increase in the number of people who visit its website and who sign up to receive e-mail updates. She believes that the women’s movement of the last part of the 20th century played a part in the need for an organization like JOFA.

“Some of the same people involved in the women’s movement are involved in JOFA,” Fox Griffel said. “As women moved ahead in their secular careers, the dichotomy between their two worlds (secular and religious) became more glaring. Here I could go to medical school in the secular world and achieve academic leadership roles and yet in my religious life I was limited.”

Fox Griffel said there is a glass ceiling in lay leadership laws. She believes the conversation about presidency of an Orthodox synagogue should center on who is the most qualified person. “We’re fighting for equal inclusion for everyone within the bounds of halakha. There are women’s voices and men’s voices; but all the voices should be heard and respected,” she said.

Sponder said that she hopes the warm reception that JOFA received in St. Louis and other cities is the beginning of more prominence for JOFA. She said JOFA is a resource for people who are interested in feminist activities in Orthodoxy; there is an extensive list of speakers on its website. JOFA also can help with programs and offer staff resources.

“I think we are considered in the marketplace as the source for anyone who is interested in bridging their feminism and Orthodoxy,” Sponder said. “There are a lot of people who are Orthodox and don’t know about feminism so we’re their first stop.”