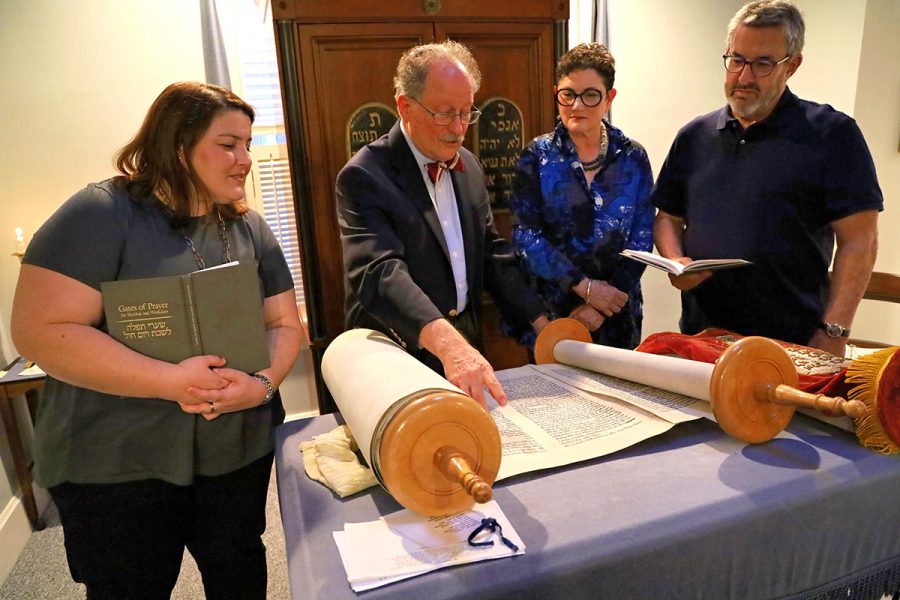 By Carol Wolf Solomon, Special to the Jewish Light

GODFREY, Ill. — I have been in this place before. On this Friday night, Aug. 16,  I am worshipping with a small, tight-knit congregation that is soon to be no more. This Kabbalat Shabbat service is bittersweet. Tonight Temple Israel of Godfrey, Ill., will donate one of its two beloved Sefer Torahs to another small-town Reform congregation, Har Shalom of Missoula, Mont.

This is not my first time at Temple Israel. While I am not an official member of the congregation, my husband and I have attended its monthly Shabbat services for the past couple of years to help make a minyan.

Temple Israel was founded in 1923 and serves the southwestern Illinois Jewish communities of Alton, Godfrey, Wood River, Bethalto, Edwardsville, Maryville and Glen Carbon. At its height, the congregation boasted more than 150 households and had a flourishing religious school. Over time, families left for larger communities, children grew up and membership began to steadily decline. Today, with fewer than a dozen members, the temple is preparing to close its doors.

A “for sale” sign sits on the front lawn of the small house that serves as Temple Israel’s home. A feeling of déjà vu washes over me. I’ve been here before. I was a member of another small congregation that shuttered  — Congregation Kol Am in Chesterfield, which closed in 2011. That process was intensely painful. My two children each became bar mitzvah and were confirmed there. My husband and I each served terms as president. We had poured our hearts and souls into the congregation.

This shouldn’t feel as painful, I tell myself. This is not “my” congregation. We are, in fact, now members of another small congregation, Shir Hadash Reconstructionist Community. This moment is difficult nonetheless. The loss of a congregation, no matter how small, is a loss for the entire Jewish community.

As always, we are greeted warmly when we walk in the door bearing the “St. Louis challah” that we bring each month as our contribution to the oneg Shabbat following the service. Tonight there are other St. Louisans in attendance, members of the Weltman family — Esther and Joel Weltman and their daughter, Michelle Weltman. Michelle has also brought along a friend, Genevieve Podleski. The Weltmans are here to accept the donated Torah on behalf of Congregation Har Shalom. I can’t help but notice that the “guests” at tonight’s service — the Weltman clan, my husband and me — outnumber the four Temple Israel members in attendance.

The Weltmans have a very personal connection to Har Shalom as their daughter, Jessica Weltman, son-in-law Matthew Semanoff, and granddaughter, Sylvie Semanoff, are members of that congregation. They moved to Missoula 15 years ago when Matt was offered a tenure-track position teaching Greek and Latin at the University of Montana. Jessica serves as legal counsel for the Montana Department of Higher Education.

After formally accepting the donated Torah tonight, Esther and Joel will accompany it to Missoula this week, a trip previously planned to celebrate Sylvie’s 11th birthday. The Weltmans assure us the Torah will be well cared for on the journey; they purchased an extra ticket so that it has its own seat on the plane.

The series of events that have brought us to this moment involved a bit of bashert (fate). Temple Israel Board Secretary Nancy Gent and Esther Weltman both serve as docents at the St. Louis Holocaust Museum and Learning Center. The two have worked together on several projects and, in the process, have become friends. They regularly share stories of small town congregational life at Temple Israel and at Har Shalom. When Esther learned that Temple Israel would soon be closing its doors and was looking for appropriate homes for its ritual items, she inquired about the Torah.

Tonight’s service begins as usual, led by Temple Israel Rabbi Lane Steinger. He frames the service with an acknowledgment of the melancholy we are all feeling. “This is a joyous moment because we will help a congregation thrive, and at the same time a sad moment because a Torah will be leaving us.” The service proceeds. We pray; we sing; we welcome Shabbat with all of the joy and ruach (spirit) we can muster.

We arrive at the Torah service. Appropriately, this week’s special reading for Shabbat Nachamu, the first Shabbat following the solemn fast day of Tisha B’Av, is Va-et’chanan, a portion that includes the first paragraph of the Shema, the emblematic declaration of our Jewish faith.

Steinger next leads us in a brief Torah passing ceremony during which the Weltman family formally accepts the Torah on behalf of Congregation Har Shalom. Esther Weltman reads a letter from Har Shalom’s Rabbi Franklin and President David Cox. They write that acquiring a second Torah for their congregation “gives kavod, that is, dignity and weight to our mission of practicing, sustaining and growing Judaism in a place that is isolated from the urban hubs of American Jewish life.” They also note, on a practical level, that a second Torah will enable more people to study directly from a Sefer Torah at once and will remove the necessity to roll a single Torah from Genesis to Deuteronomy to Leviticus during the High Holidays.

Tears begin to well up in the eyes of Temple Israel members as Esther Weltman goes on to read of Har Shalom’s offer to integrate Temple Israel’s yahrzeit list into their own, assuring that kaddish will continue to be recited in perpetuity for Temple Israel’s dearly departed in the presence of their Torah. The ceremony concludes with us singing Debbie Friedman’s “T’filat Ha-derech,”the Traveler’s Prayer.

It is said when one door closes, another opens. On this bittersweet evening we all take solace and comfort in knowing that Temple Israel’s legacy will live on through its Torah, bringing knowledge, joy and sustenance to the Har Shalom community. In this spirit, the oneg Shabbat following the service is joyful — filled with the sharing of stories, history and memories, and the viewing of photos and press clippings from a scrapbook chronicling the history of Temple Israel. The scrapbook will be donated to the St. Louis Jewish Community Archives.

This is not yet the end for Temple Israel. The congregation will continue to meet for Shabbat worship on the third Friday of each month until the sale of its building is complete. Congregants will continue to read from and be sustained by their remaining Torah, which is designated to be donated to another small congregation. And I will continue to be present, joining with them in prayer and solidarity — St. Louis challah in hand.