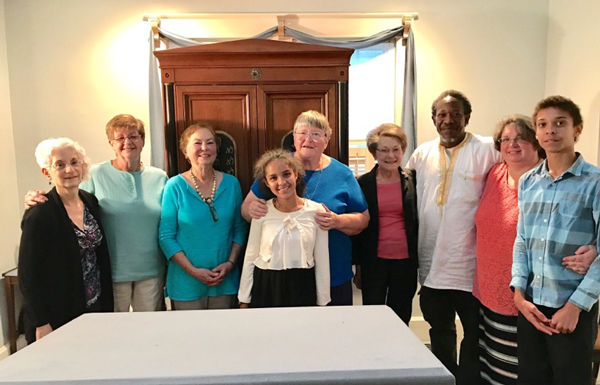 Members of Temple Israel of Alton, Ill., stand in front of the congregation’s ark.

In 1995, Gail Lipe called a member of Temple Israel in Alton and told her she was interested in joining. Lipe said she wanted her two daughters to attend Sunday school.

“The first thing she said was, ‘What class do you want to teach?’” recalls Lipe, a retired art therapist. At that time, there were about 30 families in the Reform congregation and its Sunday school teachers were members who volunteered.

“It was a nice community,” said Lipe, 68 “We gathered for simchas and for holidays, and we had rummage sales, and we had a community seder.”

The congregation has spent the past few years working with the Jewish Community Legacy Project, a nonprofit that helps small Jewish congregations with “no membership growth, aging congregants and dwindling leadership,” said Noah Levine, senior vice president of the Legacy Project and a consultant and adviser to nonprofits.

“The demographics of those congregations are such that in anywhere from one year to 20 years, they will probably be closing, unless there is a revitalization in the community, and there probably won’t be because of the nature of the Jewish demographics in this country,” he said.

Legacy Project, based in Atlanta, is working with about 35 congregations, including synagogues in Alton, Belleville, Jefferson City and Quincy, Ill. It helps congregations sort out their finances and determine what to do with their property and possessions.

Members of the congregations say that collaboration with the Legacy Project is not an acceptance of defeat but rather a matter of ensuring that the congregations do not just fade into oblivion when they are unable to continue meeting.

In general, the number of people who live in America’s rural areas, defined by the U.S. Census bureau as units with fewer than 50,000 people, has declined significantly over the past century. In 1910, about 54 percent people lived in small towns. Today, the number is 19 percent.

“With the absorption of some small-town Jewish centers into larger metropolitan conglomerates and with the decline or even demise of others, it was increasingly difficult by the end of the 20th century to find small communities that functioned much as they had in the classic era of small-town Jewry,” Lee Shai Weissbach, a professor of history, writes in “Jewish Life in Small-Town America: A History.”

The Legacy Project works to ensure that congregations will have the funding for an endowment for the cemetery. Some of these congregations are more than 150 years old.

“The issue is not taking care of it the next three years or five years or 10 years, but what will happen to the cemetery in 50 or 100 years,” Levine said.

The Legacy Project and a congregation also must figure out what do with their Torahs, Judaica, artifacts and archival documents. Their documents are usually sent to the American Jewish Archives or a local museum.

Torahs have been donated to new congregations in the United States, Israel and Guatemala, among other places.

The congregations typically “are not running out of money,” Levine said “It’s that they are running out of people, so in most cases they can afford to donate the Torahs unless they need to sell them to ensure that they have adequate funds for their cemetery endowment.”

Rabbi Justin Kerber recently started leading services once a month at Agudas Achim Beth Israel in Belleville and has worked at at B’nai Sholom in Quincy. In working with smaller congregations, Kerber said, he thinks about “American frontier life and how once upon a time there were circuit-riding preachers who would serve a lot of little congregations, going from one to the next on horseback.”

Kerber said he is aware that these are not necessarily long-term stops. Kerber also serves as a chaplain at SSM Health Cardinal Glennon Children’s Hospital in St. Louis and says working with congregations is not unlike discussing the future with patients. Do they want to be organ donors? Do they want to continue heroic treatments if doctors don’t think there is a meaningful hope of survival? What does a meaningful life look like?

With congregations, he encourages them to answer this question:  “What are they really about?”

Leaving a record behind

Like Lipe, Carla Gordon, who has two daughters, had the same requirement to teach Sunday school at the Reform B’nai Sholom congregation in Quincy. Gordon’s parents left Germany at different times —her father survived a concentration camp — and she said “belonging to a temple has always been important to me on a family level and on a personal level.”

The B’nai Sholom building opened in 1870 and has a Moorish style of architecture that was pretty prevalent at that time period among Jewish congregations, said Gordon, 64, a retired teacher. She leads tours of the building and talks about Judaism and the Holocaust to students and church groups that visit.

The congregation once had 500 members. Now, it sometimes gets 25 for services once a month, Gordon said. She said it’s primarily because “almost all of the college students left and never came back.”

The congregation hopes to continue to meet in the building until about its 150-year anniversary in 2020 and then sell the building, which isn’t in great shape. About two years ago, the board of trustees examined the cost of repairs to the building and cemetery and decided to start working with the Legacy Project.

“I don’t see [the synagogue] becoming someone’s home, but it could be an extension of a parking lot if it were to be torn down,” Gordon said.

Congregants have met with Levine a couple of times a year to discuss decisions such as where to distribute the congregation’s pews, candelabras, Torahs and stained glass.

Gordon also received permission from other members to take photos over High Holidays, which previously had not been done. And she asked a widow whether she could take photos at a gravestone dedication at the cemetery.

“We need to have a legacy in pictures as well as in words,” she  said.

Unlike those in Quincy and Alton, Agudas Achim Beth Israel in Belleville has not decided to stop meeting or to sell its building, which is why they hired Kerber before the High Holidays. It also just spent more than $100,000 to renovate the sanctuary, said Norm Greenberg, treasurer of the congregation. But the synagogue is working with the Legacy Project to develop a plan.

Before it hired Kerber, about five people were showing up for monthly services. At his first service, there were about 20, Greenberg said.

“I stopped going on Friday nights because nothing was happening, but there were four or five people who showed up because they felt it was important that they were there,” said Greenberg, 82,a retiree who had worked in on-air and production roles in radio and television. “[With Kerber] it was totally different … when it came to the Torah portion, he was able to give us a real insight, which we weren’t really able to do individually, and he’s a singer so we have music.”

As to the future, Greenberg said, “I’m hopeful. The synagogue has been there almost 100 years, and I’d hate to have it just disappear. But we are exploring what to do if and when the time comes when we have to close the synagogue.”

Lipe said that Temple Israel in Alton does not have a cemetery, so it has instead decided to set up an endowment to help children and teens attend Camp Ben Frankel in Makanda, Ill. A congregant is also trying to connect with synagogues that may have sustained flood damage during recent tropical storms to see whether they could use any of Temple Israel’s decorative items or furniture.

As to the congregations’ memorial plaques, members contact former members and families spread out across the country to distribute them.

They are asking, “Who do you know? Who knows this family?”