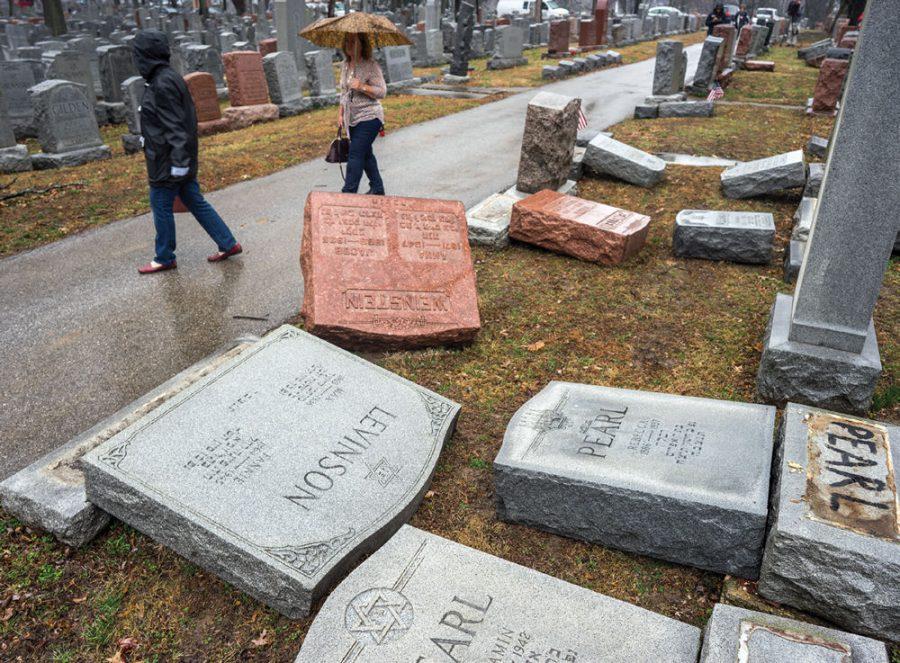 The morning of Feb. 20, people look over the toppled gravestones at Chesed Shel Emeth Cemetery in University City. The U. City Police say they are still investigating but have made no arrests in the case. Photo: James Griesedieck

By the end of June, Chesed Shel Emeth Cemetery in University City will hopefully have replaced the headstones that broke apart during the February vandalism and could not be repaired, according to the cemetery director.

Among the 154 headstones that were damaged, 16 could not be repaired.University City police are still investigating the crime, though no arrests have been made.

Some of the replacement stones will be made from a material that is stronger than the original. Meanwhile, the Jewish cemetery at Olive Boulevard and Hanley Road is now working to upgrade its security. Otherwise, things at the cemetery have returned to “relative calm,” said Anita Feigenbaum, executive director of the 129-year-old cemetery, despite the lack of any arrests.

“We have gotten back to our regular schedule,” said Feigenbaum. The fact that the case remains open, “to me is a positive because it means there is still something that police are investigating.”

The police recently had some new leads but they did produce anything, said U. City Captain Fredrick Lemons.

The local police are in contact with the FBI on the investigation, Lemons said. And the Anti-Defamation League continues to offer a $10,000 reward for information that leads to the conviction of the person or persons responsible for the vandalism.

The stones will cost about $40,000 to replace, and the cemetery is using some of the more than $160,000 raised in a crowd funding campaign organized by a pair of Muslim-American activists following the vandalism.

The replacement of the stones takes significant time, Feigenbaum said, because staff at Rosenbloom Monument Company must first draw the stone based on the original, then order the material and finally, the rock must be engraved.

“There was one very tall stone that had a star on it and the quarry didn’t know how that was cut, so they went back and forth and back and forth with the monument company, and (someone) had to come out and take picture and scale it for the granite company,” Feigenbaum said.

Jewish Federation of St. Louis is also leading efforts to upgrade security around the cemetery. The organization received more than $200,000 in donations following the vandalism and expects to use all of that on items such as cameras, fences and lighting at the seven local Jewish cemeteries, said Andrew Rehfeld, Jewish Federation president and CEO.

The organization has hired a security consultant who walked the grounds of the cemeteries and determined where there are vulnerabilities. Federation has received bids from vendors for the security upgrades, but the organization does not yet have a time frame for when installations could begin.

Rehfeld said the goal of the upgrades is to deter people from trying to vandalize the sites and also to be able to record their actions should they still try.

“We continue to be grateful for all the support we have received from the community throughout this process and look forward to putting this behind us and moving on to more positive things,” Rehfeld said.