Area reacts to violence in Washington 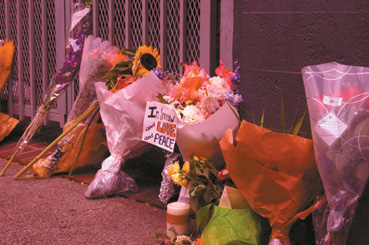 Area reacts to violence in Washington

As the situation remains tense in Israel, the national situation grows tenser following this weekend’s shootings at the Jewish Federation in Seattle, and as Jewish organizations throughout the country are bracing themselves against possible future incidents, the local Jewish community is doing the same.

“All of us are very upset and very concerned for our colleagues, and very upset for what this means for us in the Jewish community,” said Barry Rosenberg, executive director of the Jewish Federation of St. Louis.

Rosenberg said Sunday that while “all of us in St. Louis Jewish organizations are concerned, there is a tremendous amount of commitment to our mission.”

While Rosenberg declined to comment on any specifics of the Federation’s security arrangements, he said there are two major considerations guiding security measures.

“One is to review all our existing security procedures and make sure they are being followed and to take additional steps to enhance the security of our facility,” he said. “The second is to do whatever we can to make our employees, congregants and visitors feel comfortable in Jewish buildings.

Martin Zigler, president of Congregation Shaare Emeth, said there was discussion over whether to put the banner out in the first place, “to show we stand with Israel and we stand for peace in this time of potential crisis.”

“The feeling of our rabbis and lay leadership was that we need to make the statement and should do it, understanding that there was always the potential for vandalism or people wanting to make a statement.”

The banner was hung last week and Zigler said in general the congregation had received “overwhelming support for putting it out there, from both our congregation as well as members of other congregations.”

As of Monday, there was no decision on whether Shaare Emeth would hang the banner out on the corner again.

Captain George Hodack of the Creve Coeur Police Department said the department is taking the vandalism seriously, but is also not blowing the act out of proportion.

“We are always concerned about vandalism to any property in the city,” Hodack said. “We are a little more concerned about this particular incident … but I am not going to jump to any conclusions and say we have something major going on.”

Karen Aroesty, regional director of the Anti-Defamation League of Missouri and Southern Illiniois, said it is critical for Jewish organizations to be cautious and aware at this point in time.

Even before the incident in Seattle, Aroesty said she was “almost waiting to see whether something might happen.”

“We had certainly been watching news reports and letters to the editor and seeing whether or not there was an increase in anti-Israel rhetoric in what was going on.”

Aroesty sent an e-mail to Jewish organizations on July 26, before the incident in Seattle, telling leaders “there is never a bad time to remind your constituents about security awareness.”

Her letter read: “In light of the continuing violence in the Middle East — as we all pray for the safety and security of the State and the people of Israel – we also must take note of recent threats from Hezbollah to target Jewish and Israeli institutions abroad. While we have no information regarding any specific threat against any Jewish institution in this country, based upon conversations with Israeli officials we believe it would be prudent for Jewish institutions in the United States to take stock of the security measures currently in place, and to make sure they are adequate.”

Aroesty advised the community to be on the lookout and notify law enforcement immediately of anything unusual or suspicious; to ensure that staff know what to do in the event of an emergency; to review and practice security procedures; and to carefully consider security concerns surrounding large public events.

“When we talk about security awareness, we really mean everyone must be aware, not just staff but the members of the congregations should be looking out for things out of the ordinary, because it is in our very personal interest to be individually invested,” she said.

Roland Corvington, special agent in charge of the FBI department in St. Louis said nationally the FBI has been on alert that the escalation of the conflict in the Middle East could have a domestic impact.

Corvington said the local FBI department is working with ADL to plan a conference at the FBI facility at some point in the near future to discuss the issues and the FBI’s area of responsibility with respect to how the FBI would approach these crimes.

“We are doing everything we can within our power and working to ensure we can prevent any planned act,” Corvington said, “but there are only so many of us and we rely heavily on members of the public to help us accomplish our mission.”

Corvington advised the community to immediately report any suspicious acts to local authorities, and that officials representing Jewish organizations contact and meet with local police departments to discuss their concerns.