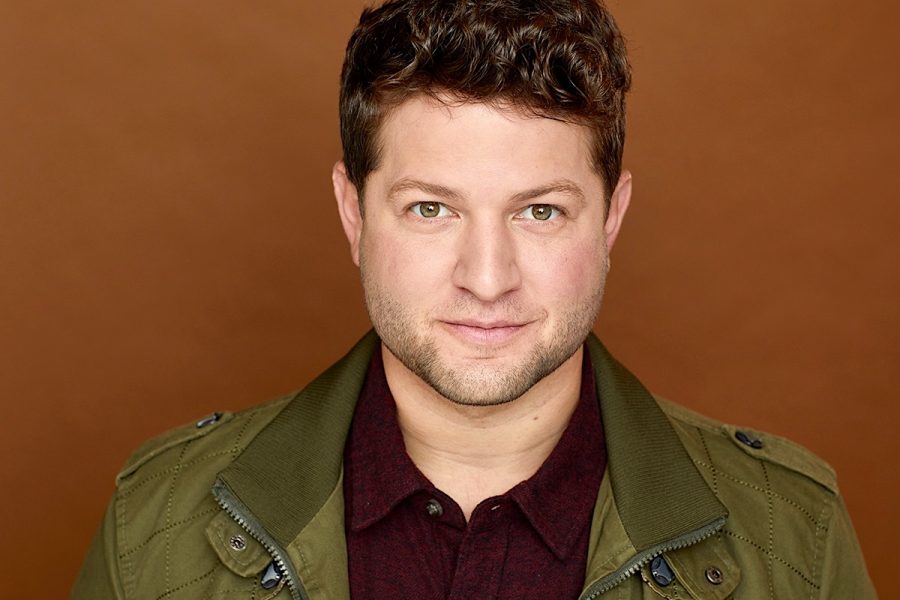 Scott Bender grew up in St. Louis but is now an actor in Los Angeles. He has a starring role in “32 Weeks,” an independent film now streaming on Amazon Prime.

It started where many of us have had our dreams of stardom realized: summer camp.

Scott Bender, 34, recalls being tapped to audition at Camp North Star for Boys, a predominantly Jewish sleep-away summer camp in Hayward, Wisc., for the musical “Guys and Dolls.” He sang “Twinkle, Twinkle Little Star” and wound up with the leading role as Nathan Detroit.

“At first, during rehearsals, I was thinking that this is too much work, I’d rather be playing baseball,” said Bender, who grew up the youngest of three boys in Chesterfield and celebrated his bar mitzvah at United Hebrew Congregation. “But then I found out the play would be performed at the girls’ camp, too, and we would get McDonald’s on the way back. I think I was 12 years old at the time. On stage in front of 300 girls and McDonald’s chicken nuggets clinched it for me.

“And then I performed, and I loved it. People told me I was amazing, and I had never been amazing at anything, I was always average. It was like the highest high in the world.”

After returning from camp, and with support from his parents, Bill and Karen Bender, Scott had professional headshots taken and signed with Talent Plus, a St. Louis-based talent and entertainment agency.

After getting several modeling jobs for print advertisements locally, Bender said Talent Plus suggested he look for work in New York. So he headed there for a summer at age 15 to live with his 23-year-old brother and wound up being featured in print ads for FAO Schwarz, Energizer and several nationally known department stores.

At 17, he participated in the New York Film Academy’s summer intensive film and acting camp, first in Los Angeles and then at Disney World in Orlando, Fla. Through these experiences, he said, he learned “a ton” about acting and making films, which only fueled his interest in studying filmmaking at the University of Colorado-Boulder.

After graduation, he and a couple of buddies backpacked in Southeast Asia for several months. Traveling to that part of the world, he said, appealed to both his curious nature and adventurous spirit. He figured he’d move to New York after he returned but then realized that if he wanted to work in film and television, he needed to be in Los Angeles.

“I found a house on Craigslist and moved in with four other people who were in a band,” Bender said. “It was a very stereotypical, comedic, welcome to L.A. kind of experience. I was a 23-year-old kid living with a band, doing what bands do.”

Asked whether the band was any good, Bender said: “They were OK. But they partied like rock stars.”

At first, Bender was more interested in writing and producing than acting. He got jobs at several prestigious studios, including Warner Bros. and Disney, “but at the end of the day, everything I’d write I’d put myself in. I couldn’t hold out any longer,” he said.

“So at 29, I quit my job as an executive assistant with a steady paycheck, health insurance and benefits and decided to pursue acting. My father being an accountant advised against it.  Still does. He’s waiting for me to go and get my business degree.”

Karen Bender laughed hard when I mentioned this to her.

“He’s so right,” she said. “Bill says to Scott every time they talk, ‘What’s your backup plan?’ ”

Apparently, there isn’t any. Ten years after moving to L.A., Bender is still there. He got some notoriety recently after starring in an independent film called “32 Weeks,” now showing on Amazon Prime. Bender plays Simon, whose weekslong relationship begins to waver after the woman he is dating emerges from a car accident with amnesia and doesn’t remember him. Without giving too much away, let’s just say the film starts off in one direction and then, toward the end, abruptly takes a turn in another.

How low was the budget?

“As the director once said in an interview, comparable to the price of a used Honda Accord,” Bender said, laughing.

The film was shot in the summer of 2018. It was entered into several prestigious film festivals, including in Fort Lauderdale and Rome, where it won an audience choice award. Nevertheless, Bender isn’t sure whether, or when, he will earn any real money from the project.

“How it works is that you basically sign a deferred payment, which means you get paid when the movie makes its profits back,” he said. “I was like, I don’t care, I just want to do this every day.

“If you’re doing a short film, it’s two days and you’re done. ‘32 Weeks’ was three weeks of shooting. I had full script notes. I had to put together a binder with all these notes, wardrobe lists  and day-to-day things. I was like, this is really making a movie. This is the dream. I want to have more binders in my life.”

Fulfilling a dream, no matter what

Unfortunately, Bender said, the pandemic hasn’t exactly elevated his acting career although in October, he did get a small role on a reenactment show that is coming to a “major streaming network.” He isn’t permitted to disclose any details yet.

“I had to get five COVID tests before getting on set,” he said. “We had to wear a mask and an eye shield until we were acting, and then we could take them off. Any crew who came up to us had to have their mask and eye shield on if they got within six feet of us. There was a COVID compliant person there, and if (the crew) got within six feet and didn’t have their mask on, he’d come up and say, ‘You have to put your mask on.’ ”

So without steady acting work, how has Bender managed to keep the lights on in his L.A. apartment? Let’s just say the guy isn’t one to turn down work, especially if it allows him to be creative.

“I’ve had 67 different jobs since I’ve been here,” he said. “I’m always doing something. Last week, my middle brother sent me this link for voiceover work that he randomly found on TikTok.

“I was doing voiceover work right when the pandemic hit, which ruined everything because you can’t go into the studio. I had bought some equipment on my own and luckily learned enough to put something together. Four days ago, I auditioned for a couple of audio books and one of them sent me an offer that said if you want to narrate my book, I’ll give you 50% of the profits.

“Last summer I was reviewing Amazon products for $20 a product. I do a lot of little stuff, too. I just did a social media commercial for an underwear company, where it was a comedic bit. I’ve done a lot of social media ads, for Facebook and Instagram. It pays a couple of hundred bucks, but it’s just one day’s work. Those are starting to come back, thank God. Without those, I can’t pay bills.”

Nevertheless, Bender isn’t the least bit deterred by the unpredictability of the line of work he has chosen. At least three separate times during our hourlong conversation, he said he couldn’t imagine doing anything else but acting.

“I get such joy out of it,” he said. “I learned in life that no matter what you do, no matter how much money you make, if you wake up and you’re not excited about the day and you don’t want to work, you’re not living life, you’re just going through the motions. I don’t want to do that.

“The fact is, I wake up every day and I’m happy doing this and excited to do it, and I won’t give that up.”

And while Bender says his father would like him to find a more practical career, his mother admits she’s “swept up” in her son’s dream.

“I just wish he would get more,” she said, referring to acting jobs. “Honestly, Bill says I’m as crazy as he is. I think about it every day, and I pray every day that he gets something so that he can be happy.

“Really and truly, in my heart, I do think something will happen. Will he be the next Brad Pitt? No. But will he be a guest star on so many different types of TV shows or a movie or something? Yes, I really think so because – and this is only because – he is, by far, the most independent, driven person I’ve ever met.”