3 essential needs that the St. Louis Cardinals must address this coming offseason 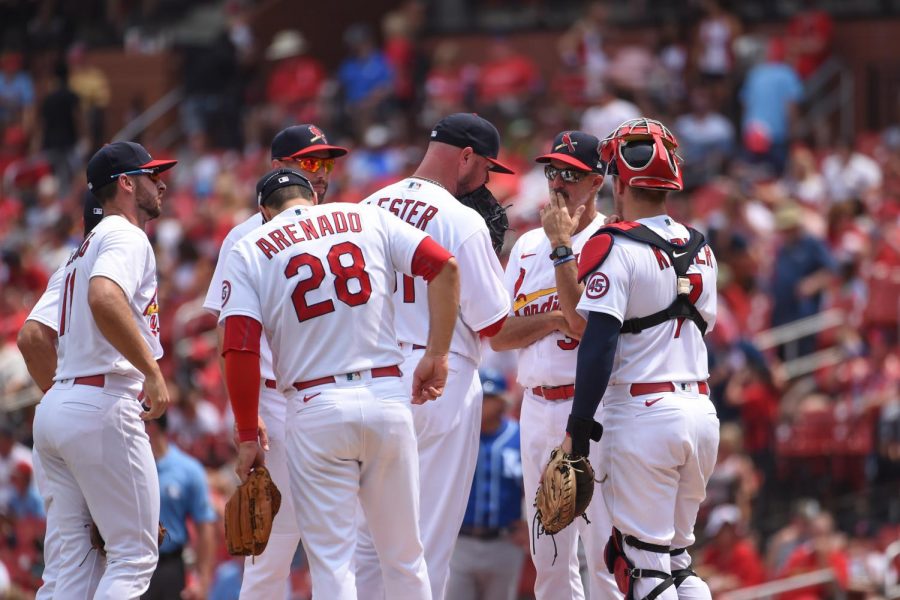 Ten days ago, when the St. Louis Cardinals collected a couple of old pitching arms at the trade deadline, the message was sent clearly: 2021 is pretty much done. The white flag was brought out of the box, even if no one is officially waving it.

With the acquisitions of Jon Lester (two bad starts in a row) and J.A. Happ (one good five-inning start), St. Louis was more than whispering to Cardinal Nation that the wait would extend to next year for any playoff theatrics–or even a mere appearance.

It’s not like this team is absolutely hopeless, but they’re getting there. The Cardinals are currently 10.5 games back of first place in the Central Division, and I wouldn’t even glance at the wildcard race. The rotation will get a boost from Jack Flaherty and Miles Mikolas, but their effect doesn’t stretch far off the mound. Mikolas can handle the bat well, but that’s around six at-bats even in a week where he starts twice. After Flaherty partially injured his oblique swinging, Cardinals manager Mike Shildt would like him taking less hacks in at the plate.

What I’m getting at is that it’s getting especially dark for the offense. When you have Paul DeJong and Yadier Molina parading around your power spots in the lineup, the ship is definitely pointed downward. The Cardinals couldn’t sweep the lowly Kansas City Royals this past weekend and had their hands full with Atlanta. What they can’t do is outhit the competition most nights, and their arms can’t provide enough zeroes to keep the game in hand. When everything does seem to work, the wheels fall off late, like in the blown finale against the Braves. Terrible inning.

I was there last year, but it’s just been super uninspiring baseball.

But the real pest for the Birds in 2021 is the offense. It can’t muster enough support for the pitchers-all the wasted Adam Wainwright starts-or maintain any resemblance of consistency. As play opens today, the Cardinals rank 24th in Major League Baseball in OPS, which is a combination of on-base percentage and slugging percentage. Even with Paul Goldschmidt (albeit, an older one) and Nolan Arenado (who is having a very good yet not MVP season), this team doesn’t have a clue with a bat in their hands. A three-run deficit looks like six right now.

So, suffice to say, 2021 is being written off. Nolan Gorman and Ivan Herrera are still a year or so away, and every other jewel down in Memphis, outside of top pitching prospect Matthew Liberatore, is too raw and unseasoned right now. The Cardinals don’t need pitchers, at least not the ones that aren’t ready (hint: Johan Oviedo and Jake Woodford). They need bats and an identity on offense.

The upcoming winter, where a ton of salary will fall off the books, has to be the big play for the front office. Bill DeWitt Jr, John Mozeliak, Michael Girsh, and all their assistants. The pandemic and its limitations will hinder most team’s (not named Dodgers) chances of going on a spending spree, and that includes St. Louis. But they need a few things in order to get back to the top. Or at the very least, try to get back there.

Had an idea today as I thought about the abundant negativity that seems to be permeating from @cigarmike @scoobydeux @C70 @BondsGCS @BamaCardsPack @buffa82 among others. Anyone who wants to participate should. @johnrabe @stlCupofJoe @zjgifford @ whoever

I’m guilty of drive by🔽

You can say this was inspired by a witty and blunt Cards account on Twitter. He asked a number of local media and baseball personalities to take their crack at redirecting this team’s future. I’d make a terrible GM, but here are three things they could do this winter to start.

*A legit shortstop. Sorry, Paul DeJong fanatics. He’s not an everyday starter, at least not here. Trea Turner probably isn’t leaving Los Angeles now, but you never know. Trevor Story would work well here. Just get someone who can dominate at the position. When was the last time DeJong wasn’t flirting with the Mendoza line?

*A top-of-the-rotation arm. Sorry, Mikolas fans. Flaherty loyals will scream he’s the ace, and I will respond with, “sure, but he needs a good #2.” Carlos Martinez isn’t going to be that. Kwang hyun Kim just went down with a serious elbow injury. Dakota Hudson will be coming off Tommy John surgery himself, so be patient. Jordan Hicks could find his way there, but don’t hold your breath on his first season Cy Young award chances. I’m not asking for them to get Max Scherzer (that would be wise), but they need a real good #2.

*Figure out your catching position. Whether or not Yadier Molina returns, the team can’t afford for him to bat fifth. That’s a recipe to lose. Molina’s OPS is well below .700. Mozeliak’s comments last week to 101.1 ESPN didn’t exactly explode with regards to Andrew Knizner. Herrera still needs a little time. He could make his entrance next year. 2022 can’t be 85% Yadi, 15% someone else. The time split-and I love Molina’s work here-has to be in play. Molina, Knizner, and Herrera. Two of them. Figure. It. Out.

A good bullpen piece is required but start with the above three. If you get a good enough starter, Hicks could fall back into an extended bullpen role, aka Giovanny Gallegos. Closer, setup, fireman, etc. Whoever falls out of the rotation eventually rolls into the bullpen plans. The team’s need for a legit shortstop looms larger than any other need. Fill that spot and your lineup will change instantly.

The 2021 offseason could define this club for the next five to ten years. It’s a moment that shouldn’t be wasted. Look around. The Brewers and Reds aren’t messing around. The Cubs won’t reload for too long. You’re not alone in the division and the NL West won’t allow the gate to the World Series to widen that much.

Are you part of the not-messing-around crew, or are you just a mere contender? This winter, Cardinal Nation finds out.