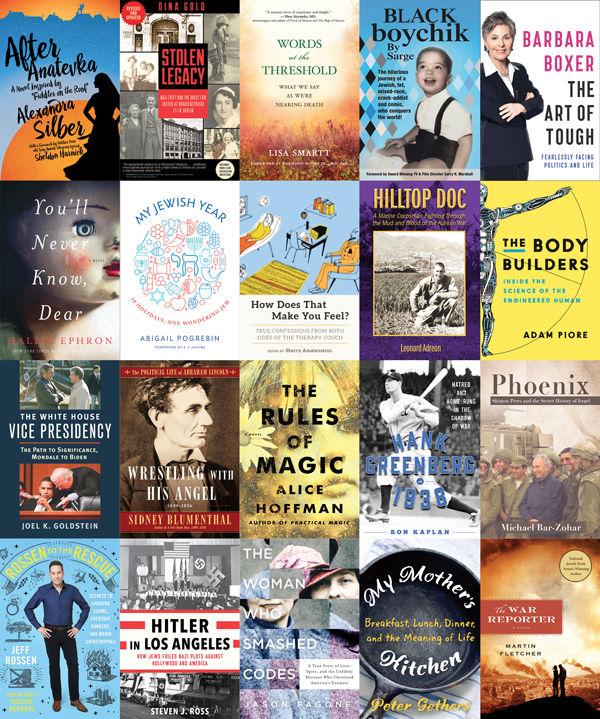 If you ever come across someone who traffics in negative Jewish stereotypes, tell them to read a book. Or better yet, to attend the St. Louis Jewish Book Festival.

That’s because this year’s festival — as in the past — has a wide variety of Jewish authors who certainly do not all fit a neat and tidy mold.

“The authors are different every year, and we always have a wide variety of topics,” said Judy Berger, a festival co-chair.

“I think we have a great lineup,” said Berger, who has been a festival volunteer for more than seven years. “You are only as good as the authors that publish that year, and when we do our screenings, we not only try to find good authors but good speakers as well.”

The festival already had some author events and a keynote speaker, Zac Posen, an internationally-known fashion designer and judge on TV’s “Project Runway,” but it kicks into full gear on Sunday, Nov. 5 with another keynote program at 7 p.m. featuring Boxer. The former California senator released a new memoir, “The Art of Tough,” as she left elected office after more than 30 years.

The festival once hosted Michael Bloomberg before he became mayor of New York but has not had an elected official of Boxer’s stature, said Scott Berzon, festival director.

“We have looked at other political figures before, but what got us excited about [Boxer] is just the range of topics that she really was impassioned about during her career, from helping military families to establishing even better relations between the U.S. and Israel to (being a) big advocate for women’s rights and minority rights,” said Berzon.

There will likely be some in the Jewish community who do not want to attend because she was a liberal Democrat, Berzon said. “But our feeling was that those people would be offset by others who want to come and hear her and maybe even be new members in our crowd,” he added.

Berzon noted that other festival highlights include a comedy night Nov. 7 featuring Sarge, author of “Black Boychik: The hilarious true story of a fat, mixed-race Jew crack addict who somehow becomes a comedian. Go Figure.” His real name is Steven Charles Pickman, and he will mix stand-up with songs on a grand piano.

“In addition to being a really funny person, he has also been a piano virtuoso from the age of 5 or 6,” said Berzon, adding that he also talks very bluntly about the fact he has been clean and sober for over 25 years but had some very severe drug problems.

“He now works as a clinician to help people in prisons and treatment centers get on the path to recovery,” said Berzon. “He is not a household name but one I would say that is not to miss.”

For those who may need help with other things besides drug addiction, there is “Rossen to the Rescue,” a book based on the journalist’s “Today” show features, “Rossen Reports.” In those segments he offers tips on everything from avoiding scams to surviving while waiting for rescue in the middle of the ocean.

“He gives ‘relatively’ practical tips on how to do a variety of things in your day-to-day life — hopefully things that you will never have to actually do, like what to do if there is a gas explosion in your home or how to escape shark-infested waters,” said Berzon.

Fletcher, a former reporter in Tel Aviv, also comes from the NBC family and will discuss his novel “The War Reporter,” about a television correspondent who struggles with post-traumatic stress disorder after covering the Bosnian War.

Fletcher, who won a National Jewish Book Award for his 2010 book, “Walking Israel:A Personal Search for the Soul of a Nation,” has spoken at the festival before and is “an audience favorite,” said Berger.

The 39th annual festival also has a number of different themed events, including one focused on Missouri authors on Nov. 6 featuring Leonard Adreon, a Korean War veteran; Joel Goldstein, an expert on U.S. vice-presidents; and Rabbi Jeffrey Stiffman, author of “150 Years of Temple Shaare Emeth.”

There is also a women’s event Nov. 8 featuring a fashion show and a talk with Leslie Bennetts, a Vanity Fair writer and author of “Last Girl Before Freeway,” a biography of the late Joan Rivers.

The book festival organizers are also already thinking about their next chapter: celebrating 40 years in 2018.

“We are trying to make the 40th year as celebratory as possible,” said Berzon. “We don’t have any concrete plans but it’s something that’s fun and important, to make sure that we pay tribute to everyone in the community that supports the festival.”