11-year-old inspired many during battle with cancer 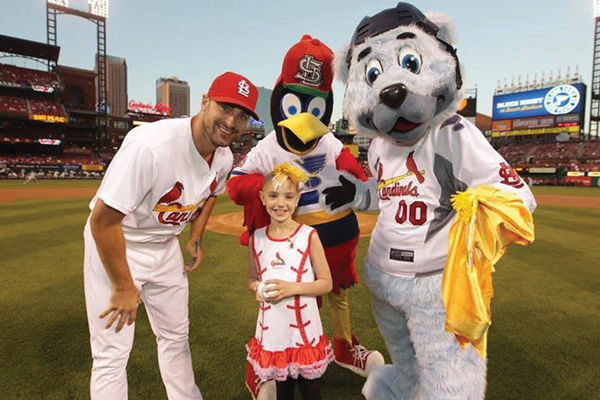 Ari on the field with the St. Louis Cardinals at Busch Stadium.

Arianna “Ari” Dougan loved the book “Fancy Nancy,” about a girl who loves to dress up fancy, “just like Ari,” her mother, Lori Zucker, said.  When they would read it, Ari would always ask to skip over the page where Nancy takes her family out for ice cream, spills a sundae and then slips and falls.

“Because it was sad for Fancy Nancy,” Zucker recalls.

A little spilled ice cream pales in comparison to the difficult moments faced by Ari, who died Saturday at age 11.

She had been battling neuroblastoma, an aggressive form of cancer that develops in the nerve cells, since she was 3 years old.

“She skipped over the bad parts — that’s how she lived her life. She never wanted to talk about how she felt. If you asked her even a week before she passed away, ‘Hi Ari, how are you today?’ She would say ‘I’m good, how are you?’ ” Zucker said.

And the thing is, despite stays in different hospitals around the country, bone marrow transplants, rounds and rounds and rounds of chemotherapy, positive tests followed by more bad news, Ari’s life had good parts too.

Like accompanying the St. Louis Blues on a road trip. And singing in Kids Rock Cancer benefits at the Sheldon Concert Hall.

People around Ari saw how she seemed to skip over the bad pages and instead focused on the hope that she would recover, and it made an impression.

Ari’s family, who belong to Congregation Shaare Emeth, went to great lengths to try and save her. For example, in 2014, Ari and her mom traveled back and forth for months from St. Louis to Memorial Sloan-Kettering Cancer Center in New York to participate in a trial for a new antibody therapy. Afterwards, a test showed that there was “no evidence of disease,” but the cancer crept back into her system.

When not in the hospital, Ari attended events with groups like Hockey Fights Cancer and met Blues star Vladimir Tarasenko, who is Russian. He told Ari that his English wasn’t very good but she reassured him and took his hand and started walking, Zucker recalls.

“That instant, they were best friends already,” said Zucker.

In February, at the Blues Casino Night charity event, Tarasenko decided that an auction item — a road trip with the Blues — would be a nice birthday gift for Ari, according to the Post-Dispatch. After checking the dates with Zucker, he bought the trip. In March, Ari, who again had gotten some good news from doctors, boarded a plane with her mom and the hockey team. She walked through the aisles distributing cookies that she had baked and telling jokes to players, Zucker recalls.

With Ari on the trip, “it’s definitely different, but the word would probably be ‘special,’” defenseman Robert Bortuzzo told the Post-Dispatch. “That’s how a lot of guys have described it. Seeing that smile every day, the joy she has, the fun she’s having.… It just shows you how tough she is.”

Ari got to watch two games — one of them with former Cardinals pitcher Jason Motte — and go out for sushi with Tarasenko. As the plane landed in St. Louis, Ari got on the intercom and said, “Thank you for having me. This is one of the best trips I’ve been on,” the Post-Dispatch reported. The team applauded.

“People felt like when they met her that they were part of her family, her best friend, with every single person she met,” said Zucker.

Before she and Tarasenko became best friends, Ari was making her name in the music world. She participated in Kids Rock Cancer, a Maryville University program. A music therapist visited Ari in her hospital room and the two wrote and performed songs. Ari’s ditties included “Cheesy Booty,” inspired by her favorite puffed-rice snack, Pirate’s Booty, and “You Can Get Through it.”

“I want kids to know that even if it seems really hard, or they feel really bad, it is going to get better and they, like me, can get through it,” Ari told the Jewish Light in 2014.

The aim of the program is to provide a creative outlet to children who have to struggle with the emotional challenges that come with cancer. Tracie Sandheinrich, a music therapist, typically works with kids age 5 or older. Shortly after the program started in 2009, a staff member at St. Louis Children’s Hospital told Sandheinrich about a 3-year- old in the bone marrow transplant unit who was “super, super smart and loves music.”

The therapist walked in and saw Ari wearing a hot pink, fuzzy sombrero. Over the years, Ari wrote 12 songs during stays at Children’s Hospital and SSM Health Cardinal Glennon Children’s Hospital, and performed at various concerts. Kids Rock Cancer songs also are recorded on CD, which leaves something behind for the loved ones of kids who don’t make it.

Ari started having respiratory issues in April but she and her family still thought she had a chance to beat the disease. She did another round of chemotherapy but afterwards doctors found the cancer had returned and was “everywhere,” Zucker said. The family talked it over with doctors in St. Louis, New York and Philadelphia and had a plan to try a new regimen and “get her well again.” But last month, she had a fever and wasn’t feeling well so they took her to Cardinal Glennon. Even as she was having difficulty breathing and was too weak to smile, she continued to tell jokes to visitors, Sandheinrich said.

“I can’t tell you how many times I have seen her so sick and she just rallied and had more strength and more spirit and more positivity than I have ever seen,” said Sandheinrich, who sang Ari’s song “Who I Am” at her funeral Monday at Shaare Emeth. Rabbi Andrea Goldstein officiated at the service. It was followed by a private burial at United Hebrew Cemetery.

Rather than just sprinkle dirt over the coffin, as is Jewish tradition, people mixed in sparkly glitter because “you know, Ari is too fancy for plain dirt,” Zucker said.

“I always have had so much joy and so much happiness from watching her,” Zucker said. “She always has given me strength and joy and happiness, and I am grateful for all of those people who have done things for her and allowed us to be along for the ride.”

Ari is survived by her parents, Lori Zucker and Shawn Dougan, and her older brothers, Liam and Aidan, and other family members. Contributions in Ari’s memory can be made to the Children’s Neuroblastoma Cancer Foundation at Cncfhope.org or by mail to Children’s Neuroblastoma Cancer Foundation, 360 W. Schick Road, Suite 23, # 211 Bloomingdale, Ill. 60108; or Pazazz Performers, a dance therapy program, at Pazazzperformers.com, or the organization that funds it, with Ari’s name in the memo, at the Andréa Rizzo Foundation, 10 East Beach Road Charlestown, R.I. 02813.