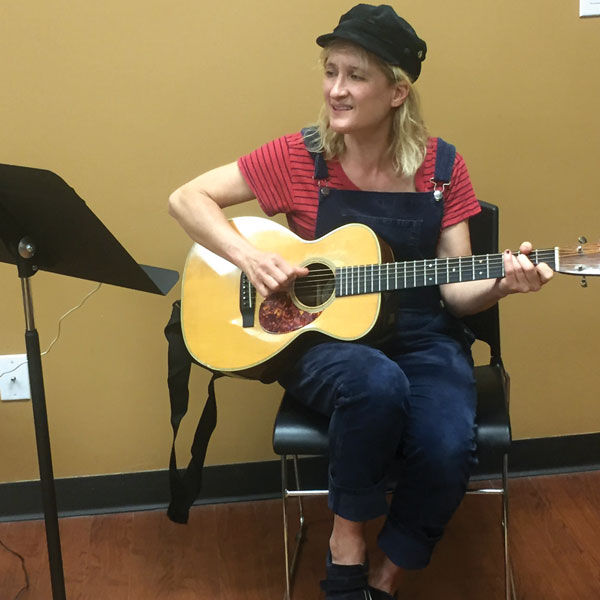 Jill Sobule, best known for her 1995 hit, ‘I Kissed A Girl,’  wrote the music for a new interpretation of ‘Yentl’ coming to the New Jewish Theatre.  Above, Sobule is pictured during a recent visit to the Jewish Community Center. Photo: Ellen Futterman

When the New Jewish Theatre presents “Yentl” next week, don’t go expecting “Papa, Can You Hear Me?” or any of the other songs featured in the 1983 film that Barbra Streisand co-wrote, directed, co-produced and starred in as the title character.

Nope, this version is definitely not that Funny Girl’s “Yentl.” And that’s not necessarily a bad thing at all.

Based on the 1962 Yiddish short story by Isaac Bashevis Singer, “Yentl, the Yeshiva Boy” tells of a young woman in 19th-century Poland who disguises herself as a boy so that she can pursue her passion of Talmudic studies by attending yeshiva, which prohibits girls. When she falls for her male study partner, Yentl must decide how far she is willing to perpetuate her masquerade.

Playwright Leah Napolin later adapted the short story with Singer, and the play ran on Broadway — without any music — in the mid-1970s, starring Tovah Feldshuh.

NJT’s production, which will run from May 11 to June 5, is based on the Napolin-Singer play, but adds a twist. Billed as a “play with music,” the latter comes from prolific singer-songwriter Jill Sobule, best known for her hits “I Kissed A Girl” and “Supermodel” (from the movie 1995 “Clueless”), though the 52-year-old has been performing for more than 25 years and recorded nine albums, with two more in the works.

Sobule (pronounced so-BEWL) was in town recently accompanied by arranger Steve Weisberg to work on the music for NJT’s “Yentl” with artistic associate Edward M. Coffield, who is directing the play, and the actors and musicians involved. She describes the music as a “funky, folky, klezmer mix with a lot of A-minor in it,”  though clearly the music gives the play a freshness and more contemporary feel.

Coffield says the music in this “Yentl” works “as commentary on what’s happening in the story rather than moving the plot forward or elevating a plot point,” as would be more common in a traditional musical.

Sobule first got involved with the production four years ago when the Asolo Repertory Theatre in Sarasota, Fla. asked her to compose a new score for ensemble members who played instruments and functioned as a sort of Greek (Yiddish?) chorus, commenting through music on the story. The Asolo staged its revival production of the play in 2012. It also got a Washington, D.C. premiere in 2014.

“I started from scratch with an acoustic guitar because the production wasn’t a proper musical per se (Streisand owns the rights to that) and I didn’t know what kind of musicians they would have, or their skill level,” says Sobule, who is Jewish and perpetually youthful looking. “I wanted to keep it pretty simple so that people of all musical backgrounds and experiences could play.”

Sobule says she had no idea there was a play based on the short story before she began the project. “I read the short story as a kid and I remember the movie, it was a kind of guilty pleasure thing for me, sort of like watching ‘Valley of the Dolls,’” says Sobule. “I love Barbra as much as anyone but it was all about her. Even as a boy she still had those gorgeous manicured nails and flawless skin. That wasn’t the way it was back in the shtetl.”

When Asolo contacted her, Sobule reread the short story and “remembers thinking how beautiful it was and how much different it was from the Streisand movie.”  No question Streisand made numerous changes, including the story’s original ending (she had rejected an earlier script that Singer had written for her). Singer was so incensed by the film that he blasted it in a commentary he wrote at the time for the New York Times.

“In my script Yentl doesn’t stay on stage from beginning to end. The leading actress must make room for others  . . . to exhibit their talents,” Singer wrote. “No matter how good you are, you don’t take everything for yourself. . . . the leading actress cannot monopolize the stage . . . The result is that Miss Streisand is always present, while poor Yentl is absent.”

Sobule thinks, and hopes, Singer (who died in 1991) would be more charitable to this newer version, which she says keeps the spirit and sense of humor of his original work and has playwright Napolin’s blessing. In this updated telling, Yentl is more of a gender-bending character, described by her father as having “the soul of a man but the body of a woman.”

Says Sobule: “If you read the short story (and play), it deals with very modern issues. It resonates with so many people in the transgender community. They didn’t have a word for transgender or fluid sexuality back then, but it also deals with feminism and female empowerment, issues that are still facing women today in the Middle East and Third World who don’t have the same rights or choices as their male counterparts. Even in this country there isn’t necessarily pay equality for women.”

When NJT decided on “Yentl,” Coffield and Sobule began having conversations about the music “because a lot of it was loosey-goosey,” she says.

“I agreed with Edward that its placement was critical and felt the music wasn’t done,” she says, adding that she is writing two new songs for NJT’s production and losing a previous one because it isn’t needed dramatically.

“Steve and I are working on some new arrangements different from Sarasota. He wasn’t involved in that one. It’s definitely getting more attention and love to the music.”

As we talk, Sobule straps on her guitar and gives an impromptu performance of a couple of the play’s songs, including a lush ballad called “Last Candle,” which she describes as her “Papa, Can You Hear Me?” moment.”

Sobule now lives in Los Angeles but grew up in Denver. She’s no stranger to St. Louis; she comes here periodically to visit her brother, Jim Sobule, an attorney and vice president at Ameren. She will return here for the opening weekend of the show.

“Growing up as we did, Jewish, is kind of like calling the Olive Garden Italian food,” she jokes. “We were pretty Reform. I was a Hebrew school dropout. I was a troublemaker and there was no way I was going to school on a weekend.

“When I moved to New York (where she lived for 10 years), I was like, ‘Now, these are Jews.’ But as I get older I feel more connected to Judaism. Working on the play, reading the Bible for inspiration, also has been something of a spiritual awakening.”

The NJT’s “Yentl” features three dedicated musicians, a musical director, and a cast of 11, many of whom will play instruments and sing. Coffield estimates 60 percent of the play to be the drama, and 40 percent music.

“The thing that strikes me most about this play is that it’s about a person having to find her own truth,” says Coffield. “That continues to ring true to me. Sometimes that comes from wonderful lessons in life and sometimes it comes from horrible lessons in life.”

To hear Sobule perform a couple of songs from the play, go to stljewishlight/multimedia.