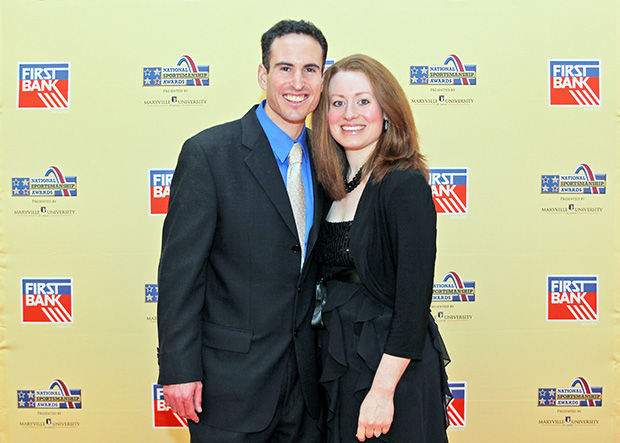 Light at the end of the tunnel

The main objective of the Jewish Light is to be a community connector. We want the newspaper not only to bring readers Jewish news of interest locally, nationally and internationally, but also to help them connect and communicate with one another.

Never has the connect part of that goal been more of a slam dunk than in the case of Erin and Marc Schreiber.

As Erin tells it, 10 years ago this week she was reading the Light when she stumbled across a story on Page 18 headlined, “Hosting the Final Four.” It talked about St. Louis playing host to the NCAA men’s basketball finals and profiled Jewish St. Louisian Marc Schreiber, vice president of marketing and development for the St. Louis Sports Commission, which was hosting the event.

To know Erin, then 24-year-old Erin Guyer, is to know that she cares nothing about sports. But it wasn’t the subject matter that caught her eye. It was the picture of Marc that accompanied the article, posed holding a basketball and surrounded by sports memorabilia.

“I thought, ‘Boy, is that guy cute,’ ” Erin remembers. “There was no mention of a wife, so I thought there was a good chance he was single.”

Erin admits she was ready for a serious relationship with a nice Jewish guy.

“I had been on JDate and felt like I had exhausted the pool,” she says. “I know I must sound like a freak, but I clipped out the article because there was something about the guy (in the picture) that really appealed to me.”

Soon after that, Erin had her two closest girlfriends over for dinner. As she lamented the lack of available Jewish men in St. Louis, one of the friends mentioned she had two possible guys to set Erin up with. As the friend began describing the first one, Erin realized it was the guy in the Light article.

That’s when the other friend made the connection that she grew up next to Marc and her mother was having him over that Friday night for Shabbat dinner.

“I said something like, ‘I really appreciate you giving him my number, and I won’t hold you accountable if he never calls,’ ” says Erin, 34, who splits her time working in the admission office at Saul Mirowitz Jewish Community School and Maryville University, where she does Jewish programming.

Marc called Erin a few days later, and the two went on their first date — to see “Jesus Christ Superstar” at the Muny. It was July 13. They were engaged the following January.

For his part, Marc says that at the time he, too, “was struggling” in his dating life.

“As a young Jewish person in St. Louis, there was no shortage of people suggesting potential options,” says Marc, 40. “But I still wasn’t having a lot of success.”

Erin and Marc married in 2007, live in Creve Coeur and are parents to 4-year-old twin daughters (one is named for the mother who hosted that fateful Shabbat dinner).  Both describe their courtship as easy. Erin says “it just flowed,” while Marc recalls being immediately taken with “how wonderful and happy and upbeat” she was and “how much she instantly cared” about him.

While the two share similar values and have a terrific time with each other, Erin says (and Marc confirms)  she still doesn’t care much about sports. But the Jewish Light?

She reads it religiously.

Joan Lipkin, artistic director of That Uppity Theatre Company, says there is much for Jewish audiences of all sexual orientations to enjoy this weekend at “Briefs,” a festival of short LGBT plays.

“We like to say everyone is welcome, including people who are straight but not narrow,” Lipkin says. “The stories these plays tell are foremost human stories. We get to the universal through the particular.”

One of the eight 10-minute plays is “My Husband,” written by Paul Rudnick. It tells the story of an overly competitive Jewish mother who wants her son to have the largest gay wedding ever. But first she needs to find him a husband.

“I first saw it in a New York collection of plays called ‘Stand on Ceremony: The Gay Marriages Plays’ and thought it was so fantastic,” Lipkin says. “So I acquired the rights so I could show it at this year’s festival.”

“Ferguson,” written by Lipkin, focuses on a white gay male couple whose relationship faces challenges when one of them becomes deeply involved with the Black Lives Matter movement and the other doesn’t approve.

“While this isn’t a specifically Jewish play, it addresses the history of protests and social justice, which are wholly Jewish values,” Lipkin says. “As a playwright looking at two different points of view and giving them equal weight – that to me is the crux of the matter of people understanding each other. The play is a microcosm of discussions that are going on in real life.”

Performances this weekend (March 27-29) are at 8 p.m. Friday, 4 and 8 p.m. Saturday and 2 p.m. Sunday at the Rialto Ballroom at Grand Center, 3547 Olive Street. Tickets, at $18-$25, are available at briefs15.brownpapertickets.com, with options that include an additional charge for Sunday brunch and VIP seating. Lipkin’s theater company and the Vital Voice magazine serve as festival sponsors.

Congratulations to Rabbi Carnie Shalom Rose of Congregation B’nai Amoona for being selected to the Jewish Daily Forward’s 2015 class of 33 Most Inspiring Rabbis.

“Rose is someone who learns from others and has a way of giving just the right message to each individual for every occasion. His d’var Torah each Shabbat is inspiring and teaches a meaningful lesson. In addition, he is actively involved in the Jewish and interfaith community. Rabbi Rose recently underwent brain surgery to remove a tumor, and his comeback has been a lesson to many in how to be positive, resourceful and inspiring on the way to recovery. He is an energetic, enthusiastic and outstanding leader and teacher.”

A tip of the kippah, Rabbi Rose.