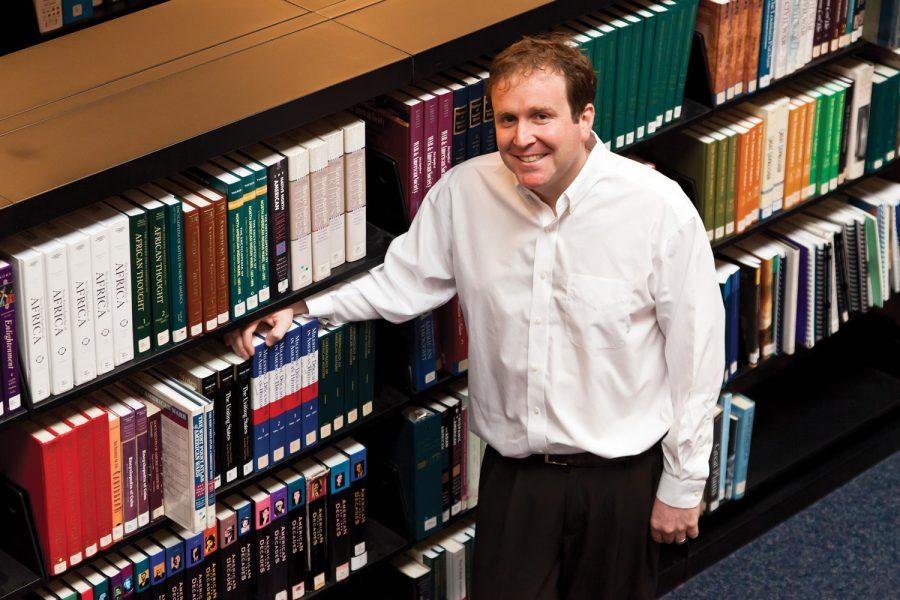 Framed by the Gateway Arch and a commanding view of the Mississippi from his 26th story window overlooking downtown St. Louis, the world can seem a small place.

Yet still, Josh Goldman knows that everything outside that window is based on a very big concept, literacy, the foundation upon which a city is built.

“If kids can’t read, they are just not going to have a shot,” said Goldman, senior education project manager for Urban Strategies, a non-profit that works to strengthen families and redevelop communities by creating partnerships with local entities. “It’s something I’ve always been passionate about. I think that reading and literacy have been an important thread throughout my entire life, in the history of my family and of my people.”

These days, Goldman, 37, has a place to let that thread play itself out. The St. Louis University and Vanderbilt alumnus is head of Succeeding with Reading, a program he founded in 2004 while doing his second master’s degree, this one in socioeconomic development at Washington University. Originally developed while he was an intern at Urban Strategies, the initiative involves a unique approach to spreading reading abilities to others.

“We have written curriculum now that makes an approached called balanced literacy, a national best practice, more successful,” he said. “We take this national literacy model of balanced literacy and we make it better by getting ratios down to 4-to-1 in classrooms.”

That’s not all. Succeeding with Reading is becoming increasingly multilayered.

“In terms of family literacy, which is the new program we just created, we’re basically teaching adult learners strategies they can use to teach their kids to read and at the same time, they can use it with their own reading,” he said. “It’s an example of a dual generation program and I think a lot of my work here now is about dual generation programming and services and frameworks for the whole organization.”

The desire to be a part of the educational scene has always been in Goldman’s repertoire.

“I had wanted to be a teacher because I had gone to a summer camp and then was a counselor there for 15 summers,” he said. “I always loved kids.”

Later he would teach in private schools in both Nashville and St. Louis.

Karen Sher remembers him from his time as part of the first cohort of the Millstone Fellows Program, a leadership development initiative in the Jewish community.

“He’s just a genuine, deep-thinking soul,” she said. “He is very thoughtful in his approach to community. I believe he’s a real visionary because of how he looks at community.”

Sher, a senior program associate for the Millstone Institute, described Goldman as an agent of change who really makes a difference in the lives of others.

“He’s got this openness to learning and to not judging others,” she said. “As much as he brings to the table, he gets so much back for his own personal growth.”

Goldman loves to feel he is making a difference by finding the sweet spot where learning fits into a larger picture of building community.

Of course, tackling that hasn’t always been easy. Though it started at Urban Strategies, Goldman’s reading program has traveled further afield and he kept it going independently through fundraising for about four years.

Today, it’s back home as an important component in the overall picture the agency puts together.

In his present job, Goldman often has to ask the big questions. What’s the best strategy for dealing with the school system? What about afterschool activities? What are the educational needs of a community?

“Once that’s figured out, then I work with the team in that city to really link our families to these schools and services in the right way and make these strategies happen,” he said.

Making things happen is something Goldman said he learned from his mother, Stephanie Riven, who was executive director of COCA. He said her example helped him to translate ideas into reality. Meanwhile, his father, Roger Goldman, a law professor at St. Louis University, played a big role as well.

“He taught me there is much to be learned from text and from study and certainly much to be enjoyed,” Josh Goldman said. “I see reading and study as a real source of possibility and I think that comes from my dad.”

His Jewish values have been a part of the picture as well. He presently serves on the Domestic Advocacy Committee on the Jewish Community Relations Council.

“I thought a lot about my values and how they play into what I do, what my work is, what I’m passionate about,” he said. “I think a lot of my value set came from my temple, Central Reform Congregation, where I’m a member and have been for 27 years.”

Today, Succeeding with Reading is seeing good results in recent evaluations having shown measurable gains in test scores. Moreover, it’s given away some 8,000 books over the past nine years, most of them donated. Now public money is being made available to help run the effort at two local schools. In addition, Urban Strategies, which has a presence in eight cities, is looking to use the program as a national model.

Meanwhile, Goldman is still trying to spread the word.

“I’ve had 11 interns from Wash U and I try to teach them a value set and way of operating so that they then can be passionate in solving challenges and innovating,” he said.

In the end, it is all a part of his overall philosophy.

“I’ve just always believed that there are vulnerable people out there and that they need the same opportunities and the same chances that I had,” he said. “That’s just something that sort of informs everything that I do. I don’t look at this work as handouts or entitlements. It’s just about creating a ladder out for people in poverty.”

FUN FACT: Goldman just ran a half marathon posting a personal best time. He is active in other athletic endeavors as well and has played on as many as four softball teams in a week.