What is the Lag BaOmer pilgrimage?

Ultra-Orthodox Jews gather at the gravesite of Rabbi Shimon Bar Yochai at Mount Meron in northern Israel on April 29, 2021, as they celebrate the Jewish holiday of Lag BaOmer. Jalaa Marey/AFP via Getty Images

The annual Lag BaOmer pilgrimage to Mount Meron in Israel – which in 2022 falls on Wednesday night, May 18 – until recently has attracted as many as half a million visitors every year. The annual gathering, which takes place at what is believed to be the gravesite of the second-century Talmudic sage Rabbi Shimon Bar Yochai, is by far the largest Jewish pilgrimage in modern times.

This year, Israeli authorities have imposed strict new rules to control the crowd.

I have participated twice in the pilgrimage – once in 1994 as a newly observant Jew seeking religious meaning, and again in 2001 as a scholar of Jewish history. What fascinates me about this pilgrimage is the way it weaves together Jewish mysticism, folk practices and modern-day nationalism.
Early history
The Jewish practice of worshipping at the graves of holy men is at least a thousand years old. Many Jews – particularly those whose ancestry comes from the Arab world, called “Mizrahim” or “Sephardim” – believe that these saints can act as their advocates in the “celestial court.” They pray at their gravesites for everything from children to good health to a livelihood.

The pilgrimage to Meron, in the hills of the Galilee near Safed in the northern part of Israel, initially focused on the graves of other holy figures said to be buried there, particularly the early rabbinic sages Hillel and Shammai, whose debates on Jewish law helped lay the foundation for rabbinic Judaism 2,000 years ago.

In the aftermath of the Jewish expulsion from Spain in 1492, Safed grew into an important center of Jewish mysticism, known in Hebrew as Kabbalah. The most important and influential of these mystics was the 16th-century scholar Isaac Luria, whose innovative teachings transformed Judaism and changed the course of Jewish history. Under his influence, the focus of the Meron pilgrimage shifted to Shimon, whose burial place was among the many such graves of ancient rabbis that Luria “identified” with supernatural guidance.

Shimon is by tradition credited with the composition of the Zohar, the core text of all subsequent Jewish mysticism, though scholars have determined it was actually composed in 13th-century Spain.

Sixteenth-century mystics, and the Jews who follow in their footsteps, are thus particularly interested in connecting to him. They are especially interested in doing so on the anniversary of his death, the day on which the Zohar states he revealed the deepest secrets about God, and pilgrims expect to experience a taste of that revelation. Since at least the 18th century, Jews have widely recognized that date as the holiday of Lag BaOmer.
The pilgrimage
The Hebrew name of the holiday Lag BaOmer refers to its date in the Jewish calendar: the 33rd day of the ritual to “Count the Omer.” During this period, observant Jews count the 50 days from the holiday of Passover, which commemorates the exodus from Egypt, to the holiday of Shavuot, commemorating God’s revelation and giving of the Torah, the Jewish holy canon.

These seven weeks of the Omer are traditionally days of mourning, commemorating the death of 24,000 students of the great sage Rabbi Akiva in the second century from a plague, seen as a punishment by God. Only five people survived, including Shimon. Haircuts, music, weddings and all celebrations are prohibited during that seven-week period.

On Lag BaOmer, the restrictions are lifted in accordance with the tradition that on this day the plague ended. Mystical tradition credits this to Shimon’s death, which was understood as having the power to eradicate the decree of the plague. According to that tradition, Shimon instructed that the day of his passing be celebrated rather than mourned, and thus was born the celebration we know today.
Rituals and prayers
In the 20th century, even before the founding of Israel, the Lag BaOmer pilgrimage to Meron grew into a mass event.

Pilgrims light bonfires symbolizing the light of Torah revealed by Shimon, or perhaps the literal fires that the Zohar states surrounded him at the moment of his death. In fact, they are lit not only at Meron, but throughout Israel and the world.

For some secular Zionists it evokes not Shimon Bar Yochai but instead Shimon Bar Kosiba, known as Bar Kochba, who led a rebellion of Jews in Judea against the Roman Empire that occurred around the same time. For over a century, the Zionist movement has glorified that rebellion for its military heroism, despite Bar Kochba’s ultimate crushing defeat.

The earliest pilgrims to Meron were mostly Moroccan Jews who arrived in Israel intent on continuing their tradition of graveside visits to saints, convinced of the possibility of magical remedies and blessings through their holy intervention.

Many pilgrims to Meron celebrate the kabbalistic custom there of giving a boy his first haircut, leaving the sidelocks, at 3 years of age. In recent years, ultra-Orthodox Jews of European ancestry – especially Hasidim – have increasingly dominated the site, although all sectors of Jewish society are represented there.

The pilgrimage is one of the only truly widespread expressions of folk religion in Judaism today. As anthropologist Edith Turner wrote in her classic essay on Meron, pilgrims come to Meron with deep faith in its power to bring blessings to them.

The celebration is an intense, highly packed event that offers participants an ecstatic experience of communing with God in a collective of tens or even hundreds of thousands of fellow Jews.

I can certainly attest to this effect. In 1994, at the start of my journey into Orthodox Judaism, I joined the Lag BaOmer pilgrimage to Meron. At that time, the festival hosted many Moroccan Jews, who camped outside the main grounds. Several among them had live animals ready to be slaughtered and eaten to celebrate their sons’ first haircuts. The Ashkenazic Hasidic Jews – sects of Jews from Eastern Europe deeply influenced by Jewish mysticism and devoted to their leaders – dominated the inner spaces of the compound.

Everywhere I walked, people offered me free drinks, convinced of the promise that it would bring blessings to their family. Meanwhile, gender-segregated crowds sang and danced in unison for hours into the night, creating a palpable sense of euphoria and connection to a collective eternity. Some of us pushed inside to approach the gravesite and prayed for blessings of success, while others pushed to reach closer to the bonfires.

There were several fires, each representing a different Jewish community, although by custom the main fire is lit by the head of the “Boyan” Hasidim, so called because their leaders originally lived in the city of Boyan in Ukraine. It was in the area of a different Hasidic group, known as Toldos Aharon, that the tragedy on April 30, 2021, occurred. This group can be seen dancing in 2021, just before the tragedy.

By the time I returned in 2001, I had become a full-fledged Hasid myself and was living in Betar Illit, a massive Haredi settlement south of Jerusalem. I recall far fewer Moroccan families camping in tents. But the number of Haredim, joined by Sephardim, modern Orthodox and even secular pilgrims, seemed to have exploded, serving to enhance that sense of eternal community, of Jewish connection across time and space.

I have long since left that Hasidic world, for a variety of reasons. But I do not for a moment discount the very real experience of divinity and eternity enjoyed by Meron pilgrims, and their deep need to return to it each year.
Political overtones 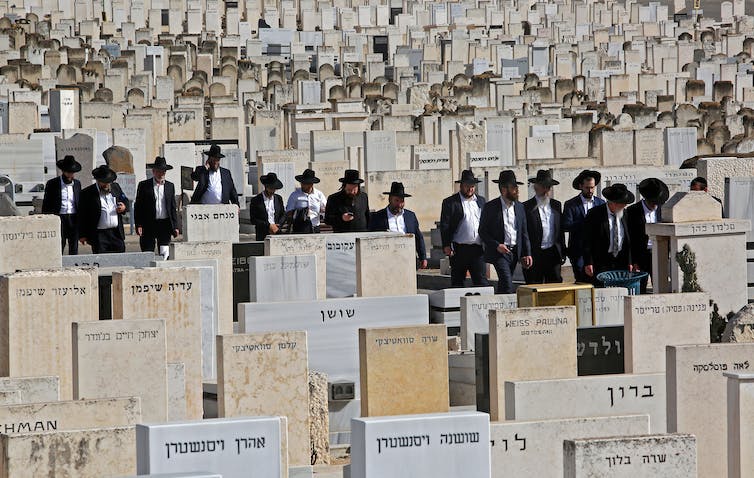 Ultra-Orthodox Jews attend a funeral at Segula cemetery in Petah Tikva on April 30, 2021, for one of the victims of the Meron stampede.
Gil Cohen Magen GIL /AFP via Getty Images
The events leading up to the deadly stampede of 2021 need to be viewed in context of Haredi society in Israel – today over 14% of the Jewish population, but growing rapidly – and the power wielded by its leaders. Israel’s first prime minister, David Ben Gurion, granted Haredim extensive autonomy in their education system, military deferments, welfare funding and more. Israel’s parliamentary system, which offers small political parties disproportionate power, has carefully protected and expanded that autonomy

As a result, Haredi leaders have successfully fought enforcement of government oversight and safety regulations, from COVID-19 restrictions to the Meron festival. Countless officials had warned that Meron was a disaster waiting to happen. But on the eve of Lag BaOmer last year, Aryeh Deri, then interior minister and leader of the Sephardic (and Ultra-Orthodox) Shas party, said Jews “should trust in Rabbi Shimon.” “This is a holy day, and the largest gathering of Jews [each year].” “Bad things,” he promised, “don’t happen to Jews on religious pilgrimage.”

Similar sentiments were voiced by Haredi leaders when they prematurely opened their schools in 2020, promising that Torah study would hold the plague at bay.

One hopes that the Haredim and other Israelis will accept government oversight and limits at the site imposed in 2022.

This is an updated version of an article first published on May 7, 2021.