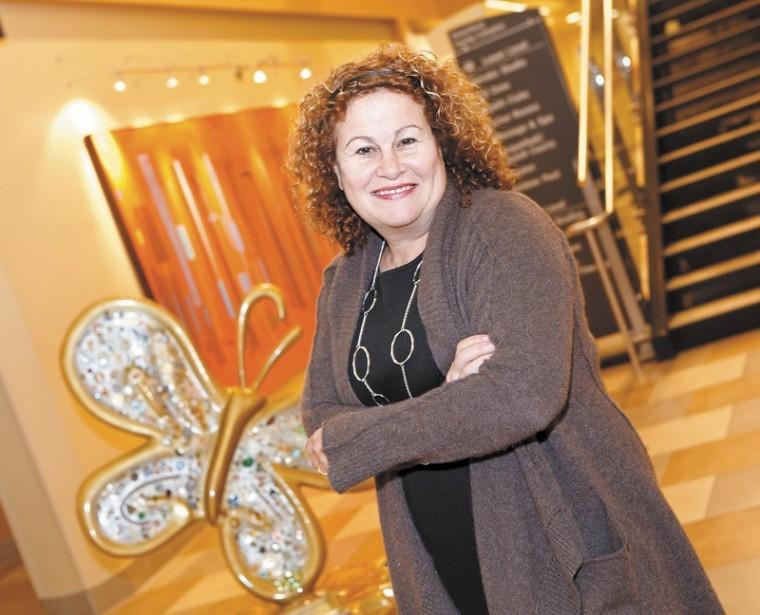 Diane Katzman with her “Tikkun Olam Butterfly” on display at the Jewish Community Center in Creve Coeur. Photo: Lisa Mandel

As of this writing, no one has been apprehended for prying the pig off the “Tikkun Olam Butterfly,” a.k.a. the butterfly sculpture that welcomes visitors as they walk into the Jewish Community Center’s Staenberg Family Complex.

Artist Diane Katzman constructed the butterfly with a “Judaic flair” after it was commissioned a few months ago by businessman and philanthropist Michael Staenberg. A previous butterfly by Katzman that had been on display at the JCC was part of a citywide public art project called “Wings in the City.” At an auction in May, the project’s 56 butterflies, including Katzman’s, garnered a total of $1.3 million to benefit Wings, the nonprofit BJC pediatric hospice and palliative care program.

When Staenberg asked Katzman to create another butterfly specifically for the JCC, she once again designed it as an “A-to-Z Seek-and Find” with various items representing each letter of the alphabet. However, the new one was crafted around the theme tikkun olam, which in Hebrew means repairing the world.

Last week, before photographer Lisa Mandel was to photograph the “Tikkun Olam Butterfly” at the JCC, a patient of Katzman’s husband (he is a doctor) alerted him to the missing pig, which was included to get people to think about kashrut.

“I had put it on purposely,” says Katzman. “This was not a kosher piece, but rather a piece that I hope will engage people of all generations in conversation. That is what art is supposed to do.”

Rather than go hog wild upon learning of the vandalism, Katzman decided to repair the sculpture. “It’s kind of interesting,” she says. “Here you have JCC art and it’s evoking some emotion.”

Instead of replacing the letter “P” with another pig, Katzman chose Psalms. Still, she insists she wasn’t kowtowing to the controversy.

“I could not find another pig,” she says. “This was a pig like from 1942 and part of an old pig pen. For the purposes of getting it done, the Psalms made better sense. They were beautiful, and big enough to cover the gouge where the pig had been.”

Anyone knowing who is responsible for the pig-napping is asked to squeal to the authorities.

“Billy Elliot the Musical” a

cautionary review in one act

Last week’s N&S told of Jacob Zelonky, the 13-year-old actor from Memphis who plays Michael, the best friend of the title character in “Billy Elliot the Musical” now playing at the Fox Theatre, and who also became a bar mitzvah at Central Reform Congregation on Monday.

Zelonky rotates in the role of Michael (with Ben Cook), just like the part of Billy, which is physically and theatrically demanding, rotates among four actors. At the performance I saw last Wednesday night, Zelonky was cast as Michael and J.P. Viernes played Billy. Both are immensely talented, and a true joy to see in action. I suspect the other young men in these parts are equally gifted.

And while the play itself has so much to like, most notably out-of-this-world dancing, there are a couple of factors to keep in mind should you go.

For those unfamiliar with the story, “Billy Elliot the Musical,” adapted from the 2000 Oscar-nominated film, centers on an 11-year-old, working-class British boy who discovers a passion for ballet he must pursue, despite objections from his widowed father and older brother. The two are striking coalminers-the backdrop for the action is the 1984-85 U.K. national miner’s strike.

Without a doubt, the show is at its best when the focus is on the dancing, stunningly choreographed by Peter Darling. The lively number “Expressing Yourself,” performed by Michael and Billy and a cadre of oversized dancing dresses, is particularly exhilarating, as are “Shine” and “Born to Boogie,” which features Billy along with his tough-minded dance instructor Mrs. Wikinson (the wonderful Leah Hocking).

But where the play falls short-and winds up being overly long at a tad over three hours (with intermission)-is crowding too many ho-hum songs with too many subplots. Save the above musical numbers and a few more, the rest of Elton John’s score is serviceable but unmemorable. Some serious editing could go a long way in making the production sharper.

The other thing to bear in mind is bawdy language. I had my own 13-year-old in tow, much to his chagrin. And while he wound up enjoying the show and was glad he went, the dialogue surprised him. Granted, there were few words he hadn’t heard before, including some out of the mouth of his mother. But watching the actors on stage, especially those his age, utter frequent expletives made him skittish. I know because he kept jabbing me in the ribs so that I was black-and-blue by the show’s end.

Still, the dancing itself – exuberant, poetic and inspired-is reason enough to treat yourself to “Billy Elliot the Musical.” It runs through Sunday, Nov. 13.