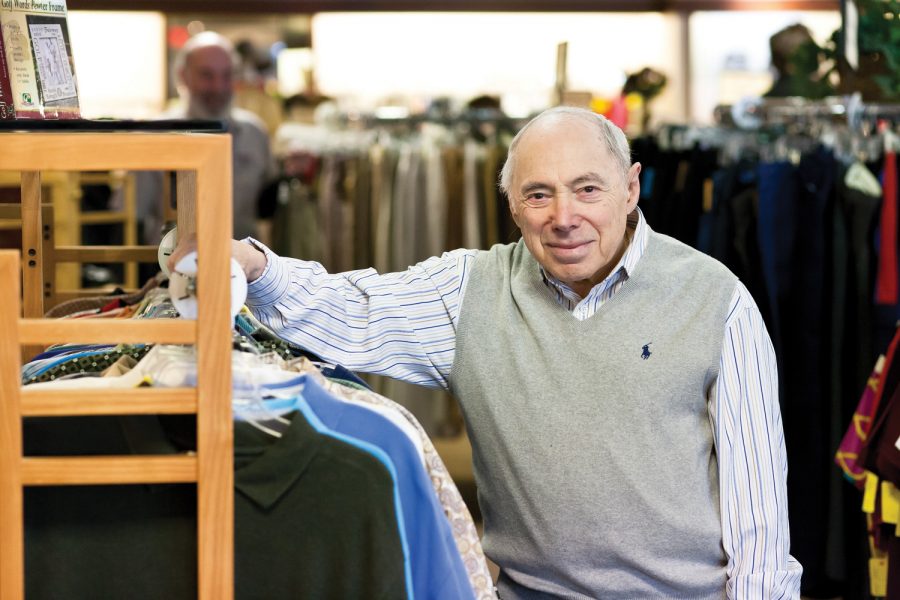 Herb Eissman is pictured at The Resale Shop, which is run by National Council for Jewish Women - St. Louis Section. Photo: Lisa Mandel

Some people retire to get away from work. Others seek work out after leaving their jobs.

Herb Eissman is definitely the latter.

“I just like to be helpful to people,” he said.

It’s something the 82-year-old native of Neosho, Mo. proves every weekday between 1 and 4 p.m. when he stops by the National Council of Jewish Women’s Resale Shop in Creve Coeur to assist the clerks and management in their daily duties. The five-year-long ritual hasn’t gone unnoticed.

“He means the world to us,” said Lauren Whener, the retail outlet’s assistant manager. “He is the sweetest man I have ever personally worked with. He always wants to talk to the customers and his just being in the store makes the day go by a lot better.”

Whener called him a “fantastic” person who is consistently jovial and has a smile for everyone.

“Especially when there are little children around, he always wants to stop and have a little talk and his face just lights up,” said Whener. “The other day there was a little kid running around and he was so thrilled to be able to just stand there and talk to him.”

Eissman was modest about his contributions.

“I just do whatever they ask me to do,” he said.

Eissman’s wife Flora said modesty comes naturally to her husband who doesn’t often brag on himself.

“When they called and told him he was getting this award, he said, ‘But I didn’t do anything,’” she recalled. “I said, ‘Herb, you go for hours a day and you’ve been doing it for five or six years.’”

“He’s just so pleasant to be around and always has a smile on his face,” she said. “He’s so personable with our customers. He’s known a lot of them since we moved from down on Olive. He enjoys being here and we enjoy having him.”

Flora Eissman said that her husband simply likes to keep active and is naturally given to volunteerism.

“I think Herb likes getting out of the house and having a routine in his schedule and helping other people,” she said. “It’s always nice to be able to do something and have people appreciate what you do.”

Jessica Means, co-manager of the store, said that Eissman’s presence is one the customers have come to appreciate as well.

“I’ve never heard him say a negative word,” she said. “He loves visiting with people, especially on Tuesdays, which is senior day. A lot of the gentlemen who come in know Herb by name. They’ll talk Mizzou football and Cardinal baseball.”

Means said that sometimes Eissman can almost be too reliable. If bad weather strikes, they have to phone him just to ensure he stays home.

“We know we have to call Herb first because it doesn’t matter if there is 10 feet of snow, he still thinks he needs to be there,” she said. “He takes it very seriously.”

She said that others could learn something from Eissman’s example.

“It’s positive for him, it’s positive for the community and I think that in the younger generation, we get so wrapped up in everything we think we have to do every day that we forget that tiny aspect of giving back sometimes,” she said.

It’s certainly not his first volunteer gig either. The Brith Sholom Kneseth Israel congregant used to work with the Senior Olympics as well. Eissman remembered the events fondly. One year, he even competed in the walking competition.

“It’s a lot of people and they enjoyed the work that we did for them,” he recalled. “I’ve always enjoyed sports. Some of the sporting events I would plan and help publicize.”

Eissman said he always liked to be involved, even when he was a kid.

“I was in all different organizations,” he said. “I always have been.”

“I think it makes you feel good to know that you can still do things that help other people,” she said.

It certainly makes Herb feel great to know he is helping NCJW to accomplish its mission.

“They’re really doing something good for the community,” he said.

FAVORITE PASTIMES:  Eissman is a heavy-duty Mizzou football fan. He has a Mizzou watch, a Mizzou jacket and even a Tiger-themed mailbox in front of the house.