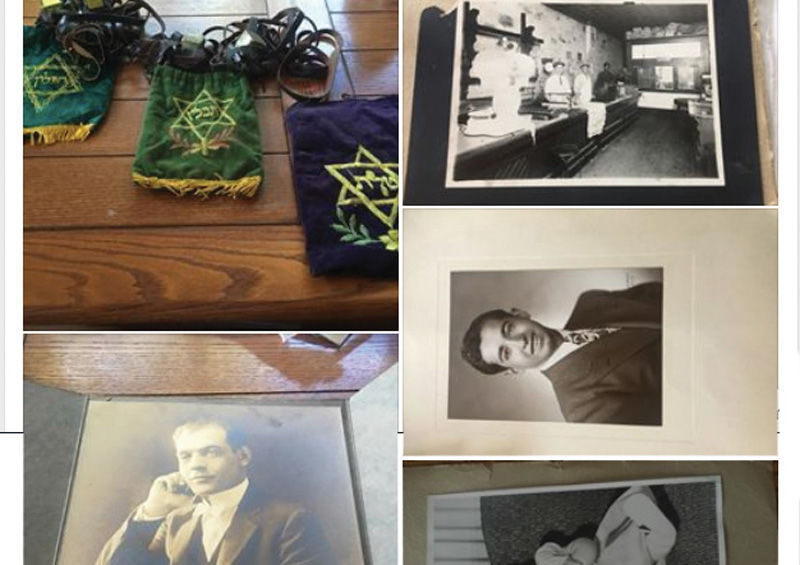 At a local thrift store, Corinne Char came upon two tefillin sets and a trove of old family photos. Through a widely shared Facebook post, Char was able to locate relatives of people pictured, and she returned the Judaica and the images.

Corinne Char loves thrift shops. So it was not unusual for the 26-year-old social worker to stop by the Salvation Army store on Forest Park Parkway as she drove home from work last week.

Perusing items behind a glass counter, she spotted a green velvet bag emblazoned with a Jewish star and Hebrew writing. She asked to see it.

“The woman helping me said she was glad someone was interested in it because she had no idea what it was,” said Char, a Chinese-American and Jew by choice who belongs to Central Reform Congregation. “She took it out and I saw that it was a tefillin bag.”

In fact, there were two velvet tefillin bags, each priced at $10 and each with tefillin inside, as well as a tallit bag, with no tallit. Tefillin is a pair of leather boxes that an observant Jew wraps around his forehead and forearm during morning prayer. Each contains parchment scrolls with Torah inscriptions, and both boxes are attached to leather straps that bind them to the body.

The saleswoman explained that when workers were unloading a dresser the day before, they heard rattling inside, so they took out the drawers and hidden were the bags along with “a ton of photos.” Many of the photos had been professionally taken and dated back more than 100 years.

Char was more than intrigued. She quickly headed to the furniture section and asked an employee if he knew which dresser contained the bags and photos. As it turned out, the employee was the one who had made the discovery.

“He asked me if I would like to see the photos,” Char said. “He thought he had thrown them away but they were still in the trash. We started pulling out photo after photo along with Almond Joy wrappers and stuff like that. I was absolutely enthralled.”

That’s when Char decided she had to reunite the pictures and tefillin with their owner. Unfortunately, the dresser came from the Salvation Army warehouse in St. Louis and couldn’t be tracked. But she figured whoever had donated the dresser probably didn’t realize these riches were left behind.

“I think my motive was curiosity,” said Char. “And if it were my relatives, I’d want to save that piece of history.”

After paying $20 for the precious stash, she turned to Facebook, explained what she had found and posted several of the photographs. In her post, she mentioned that some had the last name “Sherman” on them.

Char described one photo of an older man who was in the military, possibly as a pilot, in Europe. She posted numerous studio portraits of babies, children’s birthday parties and bar mitzvah boys as well as smiling brides and family vacations. Among the trove of photos: Theta Delta Tau-Alpha and Beta chapters formal dinner dance, dated Jan. 13, 1951. A June 5, 1966 clipping from the Post-Dispatch listed all 1,250 graduates of Washington University that year.

Within 12 hours, Char’s post had been shared 331 times and received 226 comments. Even better, the family belonging to the pictures was identified.

“We found the family through a contact in Atlanta,” Char explained. “Through all the sharing, a woman with Jewish Moms of East Cobb recognized that one of the people in the pictures I posted was in a picture in her dining room. It was her husband’s family and they were from St. Louis.”

The woman, Debbie Sunshine Seiden, said she would contact Nori Durbin, the daughter of Sheldon Sherman, who had owned the dresser. He passed away in June at the age of 85.

When I spoke to Durbin on Sunday, she said she had picked up the pictures and tefillin from Char and was thrilled to have had them returned.

“I was sure I had emptied all the furniture before we donated it,” Durbin said. “It was strange. All I could think was that maybe the pictures had fallen in the back of the drawers.”

While Durbin said she is forever grateful for the mitzvah Char performed, Char said she delighted in the various connections and comments her post ignited from virtual strangers. As people weighed in on Facebook, more Jewish genealogy was revealed, including links to families with the surnames Tabachnick, Glazer, Green and Trugman. Like Char, everyone felt a responsibility to return these treasures to their owner.

“I think the best part was seeing how big hearted the Jewish community is,” said Char, who taught religious school at CRC while in college at Washington University. “And just hearing from people all over and how everyone is so connected. Even between the Orthodox and Conservative and Reform communities, everyone recognizes someone. I’m also definitely feeling the tefillin won’t be thrown away. I just hated that idea.”