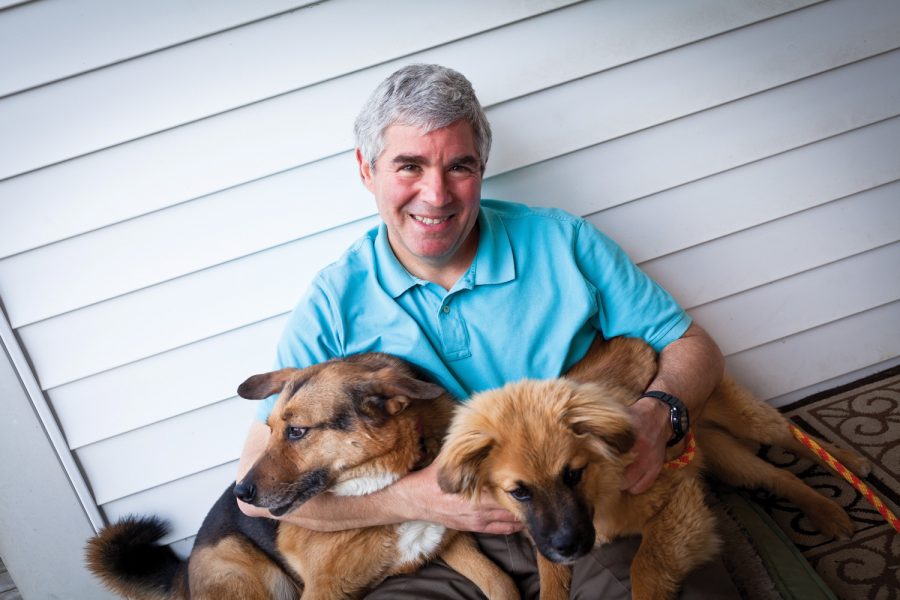 Asking how many dogs someone has is usually a simple enough question.

But not for Derek Cohn.

That’s because Cohn takes in foster dogs, as part of a program through Stray Rescue that gives canines a temporary home until they can be adopted into more permanent surroundings. For many homeless creatures, it’s more than a convenience. It can save the dog’s life.

“One of the things I learned a lot about with animal welfare and animal rescue is that most of the stories don’t have a happy ending,” Cohn said. “Most of the dogs are euthanized just because there is no space in the shelter or they have a minor health issue that somebody doesn’t want to pay for or just because somebody can’t hold them for a few days until another opportunity comes open.”

For Cohn, it all started when he volunteered as a dog walker for the organization, taking pets for lunchtime strolls in Lafayette Square during his hour away from work.

Soon however, he found himself taking in dogs instead of just exercising them. The first was, in many ways, the most inspiring. The pooch was a “hospice dog,” which had been hit by a car, had three broken legs and a wound from a BB gun.

“You try to give him an easy send off,” said Cohn. “We’ve done that for three or four dogs and that really resonated with me.”

But that initial canine proved to have incredible spirit.

“We took him home, we thought, for just a few weeks, until he passed away,” said Cohn. “He ended up recovering from his injuries and we had him for five years. That was an amazing story.”

Since then plenty of animals have found a home in Cohn’s household.

“Over the years, we’ve taken in more and more dogs,” he said. “I caught one myself down by Crown Candy on North Broadway on the way to a Stray Rescue event. That was 10 years ago and we still have him.”

Unfortunately, it’s obvious that some dogs will simply never find another home. Those with poor temperaments or personality issues or those that simply can’t interact well with strangers are rarely adopted.

They often find a home with people like Cohn.

“We’ve had three or four returned multiple times that just aren’t going to be successful anywhere else,” he said.

The native St. Louisan doesn’t only keep dogs. He moves them as well. Through a unique program called Paws on Wheels, Cohn volunteers as a relay driver to ferry rescued animals that need to be transported from one part of the country to another. He drives the Rolla-to-St. Louis segment three out of every four weekends.

“I’ve always been an animal lover but I think a lot of people are animal lovers without getting this involved,” said the 51-year-old. “It’s two parts. One is that I can’t stand by while this is going on without trying to help. The other thing is that giving voice to those that don’t have a voice is important to me. These dogs have no way to improve their own lot. It’s not like they can find their own home. It’s not that they can change their circumstances but ordinary people like me can do that.”

Cohn said Jewish values have helped him to see that reality, particularly a visit to the Avenue of the Righteous at Israel’s Yad Vashem.

“They recognize ordinary people who could do something that made a huge difference,” he said. “While I don’t want to say my name in the same breath as those people that saved the Jews from the Holocaust, it underscored for me that one person can make a difference.

“A simple act of bringing a dog into my home for a few weeks will save his life. Otherwise, the future is not bright for them.”

“I would definitely say he is one of the most selfless individuals that you could ever meet,” said Zahrndt. “If it needs to be done, he’s always the first to help out whether it is walking dogs or washing dishes or mopping.”

She said that she and others she spoke with about Cohn admire his generosity of spirit and his dependability.

“He just gives so much of himself to people,” she said.

Cohn’s volunteerism isn’t limited to his work with animals either. He also helps out as a Santa for Santa’s Helpers, a program founded by fellow 2013 Unsung Hero honoree Rita Swiener.

“Sometimes the housing circumstances are deplorable,” he said of the places where he delivers gifts to under-privileged children. “We started carrying flashlights because a lot of the homes don’t have power. They are sitting in the dark and huddling with coats on because it is so cold.”

Today, Cohn said he’s thrilled to be able to help others – whether two- or four-legged.

“I’ve found something that I want to stick with a long time,” he said.

FUN FACT:  Cohn enjoys the unusual hobby of railroad telegraphy. He is one of only a few enthusiasts who continue to keep the old railroad code alive and he also does weekend demonstrations of Morse code at the old Ferguson rail station.