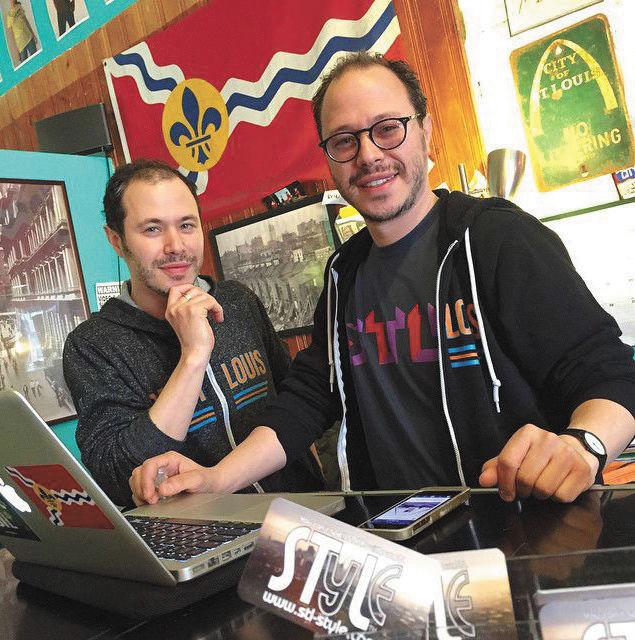 Identical twins and local entrepreneurs Jeff and Randy Vines operate a fun, quirky T-shirt and apparel shop at the corner of Cherokee Street and Compton Avenue called STL-Style. Walk in, and the first thing you notice are shirts hanging on a wall with very clever, sometimes off-color sayings that pay tribute to many of the St. Louis area’s beloved neighborhoods, streets and institutions. I recently bought one that reads: My Way or Kingshighway.

The twins grew up in Creve Coeur. Each celebrated his bar mitzvah at Congregation Shaare Emeth. Last month, they turned 40 years old and threw themselves a big party at the shop. In addition to food and drink, guests were treated to a truly visual feast, but I’m getting ahead of myself.

While attending Parkway North High School in the 1990s, the Vines brothers did something few suburban teens ventured to do at the time — they went to St. Louis city each week to film an hour-long comedy cable show at Double Helix Studios.

“Before Randy and I loved St. Louis, we loved filmmaking,” said Jeff. “We always carried our camcorders everywhere we went.”

Added Randy: “We’d go around the city with our friends and make funny silly skits we would air on the show. It really connected us to the city while most of our peers were hanging out at Denny’s on Olive Street Road.”

After opening their shop at 3159 Cherokee St. about eight years ago – they had been doing business online prior to that — Jeff got to thinking about a poster he had gotten during his Double Helix days, which he had framed and took to college with him. It was a copy of a giant outdoor wall mural that had adorned the Double Helix building in the Central West End called “The Sky’s the Limit.” Both brothers are fans of urban architecture and large-scale public art, and they loved how the mural encapsulated the time and feel of the 1970s.

“Somewhere in a move I lost (the poster) and I felt incomplete, especially after we established this store,” recalled Jeff. “I felt if only we had this poster because it was so cool. It was like a piece of me was missing.”

Earlier this year, Jeff decided to Google “The Sky’s the Limit.” That’s when he found “this obscure reference” to artists Robert Fishbone and his wife, Sarah Linquist (who died in 2010). He Googled them and stumbled upon Robert’s website.

“I was like, oh my gosh, he’s still around,” said Jeff. “I emailed him just to ask if he had an extra poster because we wanted it for our shop. He emailed back an hour later and said he would drop one off, along with some other stuff.”

Jeff says at the time, neither he nor Randy had considered commissioning a mural for their building. A few years earlier, the brothers had floated that very idea to their landlord, but he nixed it. He didn’t want the brick painted.

When Robert showed up, he and the brothers wound up talking for several hours. “We totally bonded,” said Randy. “He felt like family.”

“The Jewish connection was very palpable,” added Jeff. “I don’t think that should be underestimated.”

Robert Fishbone is an active member of Central Reform Congregation, and regularly plays music there during services and the High Holidays. The more he and the Vines brothers talked, the more they knew “that Robert’s work belonged here,” said Jeff, “it was beshert.”

After getting approval from their landlord, Jeff and Randy approached Robert about painting a full-scale mural on the western wall of their shop. He in turn reached out to his daughter Liza Fishbone, a freelance artist in Austin, Texas who sometimes joins her father on projects. In 2016, they worked with another local artist to create a mural on the KDHX building in Grand Center.

Robert explained that he and Liza went back and forth with the brothers to figure out what the mural should look like. “We thought maybe something whimsical, almost an explosion of color to the western entrance to the Cherokee area would probably serve better than a literal narrative,” said Robert.

He and Liza worked in the blistering heat 12 hours a day for two weeks to create a distinctive visual anchor to the Cherokee Street business district, on the massive 100-year-old brick wall that faces Compton. They factored in the 70s vibe that the twins so fondly remember with a disco ball as a centerpiece encircled with wheels of vibrant colors – shades of red, blue, orange, yellow, pink and purple – and sprays of light blue throughout. There’s even a nod to the Vines’ cat, Frankie, a fixture at the shop, perched atop the STL-Style storefront.

Throughout the process, passers-by would stop to chat with the artists. Robert explained that first they needed to prepare the wall to mend any irregularities in the brick and prime it before they could start designing and painting. Being something of perfectionists, they also took painstaking steps to figure our how light would impact the composition and adjust accordingly.

“We got two general comments and they were kind of gender specific,” said Robert. “Women would generally say, ‘It’s so pretty,” and the men would go, ‘Good, job.”

Randy and Jeff say they couldn’t be happier with the end result, which they officially unveiled to guests at their party. They also report that more people than ever now come into the store, curious about it and the mural.

“That was never our intention,” said Jeff. “We just wanted to establish a new landmark for this neighborhood because it deserves that.”