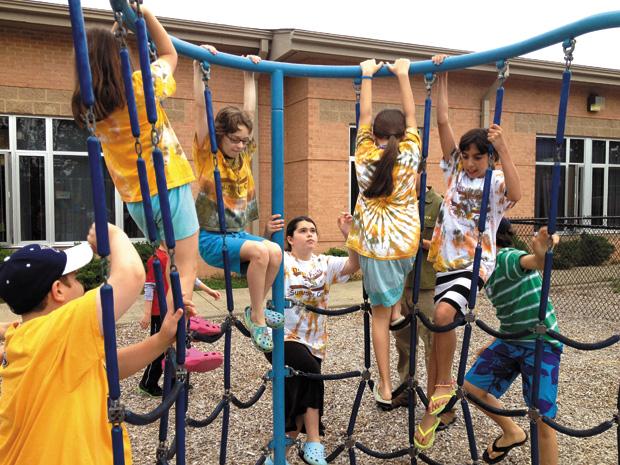 Its tagline says it all: Go to Israel without leaving St. Louis. Somehow, 10-year-old Camp Derech Eretz does just that as it teaches campers about the Jewish State while making sure they have fun in the process.

“I’ve made a lot of good friends here,” says longtime camper Yonatan Hirschhorn, 14, who is attending all three weeks of camp. “The counselors and staff are awesome and the activities are really fun and different every day.”

Making sure activities run on time, and overseeing every other facet of the camp held at Epstein Hebrew Academy, is its director for nine of the past 10 years, Suzanne Sundy. A native Israeli, Sundy and her doctor husband, Rael, came to St. Louis 12 years ago so that he could further his specialty in pulmonary medicine and critical care. The couple has four children ranging in age from 8 to 18.

During the academic year, Sundy teaches Sunday school at Kol Rinah and is very involved in the St. Louis Torah MiTzion Kollel, which brings young Israeli shlichim, or emissaries, to the area to teach at day schools and synagogues. Several also work as counselors at Derech Eretz, which can be translated two ways, says Sundy — one to mean “the way of the land” and the other meaning “nice” or “mensch,” which “are the kind of people we want to help build here,” she adds.

Sundy, 46, epitomizes “dynamo.” Her enthusiasm for the camp is infectious; so much so, she had no problem recruiting shlichim relatives in the Detroit area to help her in St. Louis this summer. Michal Schrader directs the education program for the younger campers while her husband, Yochanan, runs the adventure camp for the older ones. Sundy even found the Schraders and their four young children a home here free of charge for the weeks during camp.

As Sundy explains it, every day at camp is planned around a certain theme, each of which helps trace the history of the Jewish State from the United Nations declaration to presentday. I arrived the morning of Israel Defense Forces Day. Fifty or so of the younger campers, entering kindergarten through seventh grade, rushed the Epstein cafeteria cheering as loudly as humanly possible. Most were dressed in tie-dyed T-shirts with the camp logo (which they had made a few days earlier), and sported smudges of black face paint. Jumping up and down, they screamed the name of their group’s army unit at the top of their lungs: “Golani,” “Tzanchanim,” “Givati,” “Nahal.” Counselors were just as spirited as the kids.

After 10 minutes of each group trying to out-shout the others, Sundy motioned for everyone to quiet down and be seated, speaking in Hebrew to further her cause. It didn’t take more than a minute for campers to comply.

After a short film about serving in the IDF, seven counselors performed a skit related to the theme. That was followed by snack time. Then the real fun began as each age group took to an outdoor obstacle course representing a simulated, albeit much-relaxed version of IDF boot camp.

Meanwhile the older campers, thoseentering eighth through tenth grade, were off doing battle at paintball.

Longtime camper Yoni Strashun, who will be entering the new Yeshivat Kadimah High School this fall, says he especially likes the overnights and hikes that are a big part of the older adventure camp, including a recent one to Meramec Caverns and State Park. His buddy Yonatan, who also will be at the new yeshiva, adds that he enjoys the chesed outreach the older campers do, such as a day of service at the Harvey Kornblum Jewish Food Pantry and stuffing backpacks for Project Backpack.

Standard camp activities, such as swimming, nature walks and arts and crafts, are also part of the program. Ten-year-old Ilana Oberlander loves Israeli and hip-hop dancing as well as the third week of camp when “color war” competition breaks out. Her buddies, Meytal Hamm, Hava Shafner and Ilana Meisser, spoke excitedly about an upcoming sleepover, confiding that they plan to stay up very, very late.

These girls, as well as the dozen or so other campers I spoke with, all gave high-marks to the learning activities as well as to the recreational ones. Says Ilana Oberlander: “The counselors make it so much fun.”

Etsy Munk, who will turn 21 soon and has been a counselor here for seven summers – “Suzanne grabbed me when I was very young,” she jokes – grew up with a love for Israel instilled by Israeli born parents. To forward that love is a mitzvah, she says, and the camp really helps accomplish that goal. “It shows that we can all come together and agree on one thing, that Israel is our home,” she says.

According to Sundy, the majority of campers come from Orthodox families, though there are Conservative and Reform campers, too, and kosher dietary laws are followed. Kids can come for one, two or all three weeks, with the price ranging from $240 for one week to $550 for all three. Even the timing of the camp, from July 22 to August 9, is purposeful, coinciding with the end of so many area day camps the third week of July.

But alas, after 10 summers this looks to be the last for Camp Derech Eretz because Sundy and her family plan to return to Israel next summer. There seems to be no one else to take the directorship over.

“Going back to Israel has always been part of our plan,” says Sundy, explaining that her 18-year-old daughter will soon be entering the Israeli Army. “Last year was meant to be my last but then several parents begged me for one more year.”

Sima Oberlander, Ilana’s mother, says Ilana and her older brother, Eitan, who is at the adventure camp, will certainly miss the experience in the future. Oberlander’s two older children also had been campers at Derech Eretz.

“They’ve all enjoyed it so much,” says Oberlander, who is a member of both Young Israel and Bais Abraham. “It’s like having a little piece of Israel right here.”

Leaving camp — and St. Louis — are bittersweet for Sundy, too. But it’s time, she says, adding that she thinks camp has accomplished her biggest hope: “That they learn to love Israel and have a very positive Israeli experience with Jewish kids from all walks of life.”