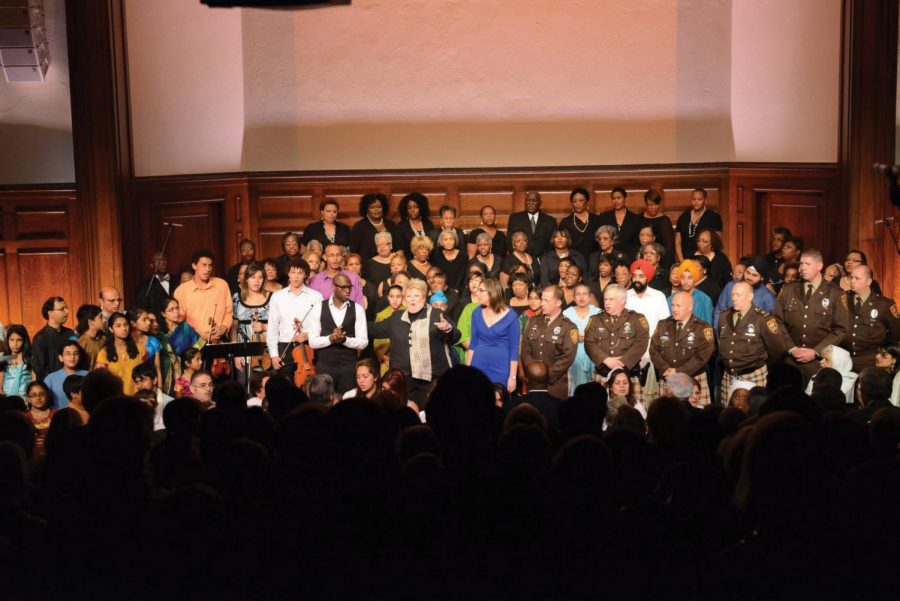 Performers come together at the close of the 9-11 Interfaith Memorial in Music held in 2012. The annual event has spurreda yearlong  series of Arts & Faith events. Photo: Ray Marklin

It started in 2011 as a way to commemorate the 10th anniversary of the 9-11 tragedy. The idea was to bring St. Louisans of all faiths and backgrounds together for a free concert at the Sheldon Concert Hall. Appropriately, it was named “Interfaith Commemoration in Music: An Appreciation of Religious Diversity.” The brains behind the concert were a small group of local religious and arts leaders, including Batya Abramson-Goldstein of the Jewish Community Relations Council and Timothy O’Leary of Opera Theatre of St. Louis.

The community response to the hour-long concert was overwhelming, judging from both the attendance and crowd enthusiasm. So a decision was made to make the event an annual one. The third installment will take place at 5:30 p.m. Sunday, Sept. 8 at the Sheldon and feature musical selections from soprano Christine Brewer, pianist Peter Martin, St. Louis Symphony Concert Master David Halen and the St. Louis Children Choirs. Members from the local Christian, Hindu, Jewish Mormon, Muslim and Sikh communities will also perform.

“The interfaith concert is terrific, but it’s a once a year event and we felt that the community wanted more,” Abramson-Goldstein explained.

Out of the 9-11 effort grew “Arts and Faith St. Louis,” chaired by Carolyn Losos. With input from representatives of the Interfaith Partnerships, Newmark Institute for Human Relations, Islamic Foundation, Hispanic Arts Council and Archdiocese of St. Louis as well as Washington and St. Louis universities, the Sheldon and Opera Theatre, a decision was made to extend the initiative’s mission from a single concert to year-round programming.

“We decided to broaden the scope and create a ‘season’ of Art & Faith events that hopefully will draw a broad, diverse audience from all backgrounds and bridge divides through shared experiences,” Abramson-Goldstein added.

Mont Levy chairs the programming committee of Arts and Faith, to which many community partner organizations and institutions have signed on, including the St. Louis Art Museum, Contemporary Art Museum, MOCRA, COCA, Stages, Metro Theatre, Shakespeare Festival and the County Library.

The first official event, “Global Connections at SLAM,” kicks off Sunday (Sept. 1) with a 90-minute, free interactive tour at the St. Louis Art Museum. Cultures are remembered by the art they produce, much of it to celebrate spiritual beliefs about life, death, and powerful events in nature. The tours, which will take place throughout the day, will highlight the links between art and spirituality through SLAM’s collection of art from around the world.

Other events, in addition to the Sept. 8 Sheldon concert, include:

“Thresholds: MOCRA at 20; Part One”: The First Decade,” a free two-part exhibition marking the first 20 years of the world’s first interfaith museum of contemporary art from 2-4 p.m. Sunday, Sept. 22. The exhibition will run through Dec. 22 at MOCRA at St. Louis University, 221 N. Grand Boulevard.

“Art21 Screening: The Spiritual Light” from 4-5 p.m. Wednesday, Oct. 2 at the Contemporary Art Museum, 3750 Washington Boulevard. The free screening of an episode of the PBS documentary “Spirituality” features interviews by prominent contemporary artists exploring themes of faith and religious symbolism in their practice.

“COCA’s St. Louis Architecture Tour” from 2-5 p.m. Sunday, Jan. 19. Architect Evan Bronstein will lead a tour into some of the city’s most significant houses of worship, explaining architectural styles and how these buildings communicate concepts of faith through symbols and structure. Transportation is provided by COCA, where the tour will start and end. The cost is $20 and available to those 18 and older. To make a reservation, go to www.cocastl.org.

Losos says she hopes more faith groups and institutions will get involved with Arts & Faith as it continues to evolve. “Art and faith does speak the same language but they do so in different ways,” said Losos. “Both want to make a difference with what they are doing and want to reach a more diverse community. One of the things we can help them do is to reach beyond the communities they are used to speaking to. I’m not just talking different colors but different cultures, different ethnic and faith backgrounds, different economic and social situations, different geography. We need the region to come together and be able to talk and interact with one another but do so in a respectful way that promotes mutual understanding.

“Hopefully, with what we are providing, people’s world view will grow,” Losos continued. “It’s a grand experiment that we don’t think is going on anyplace else in the country. We hope whatever we do will make a difference and help to say St. Louis is a community that truly can sing together.”