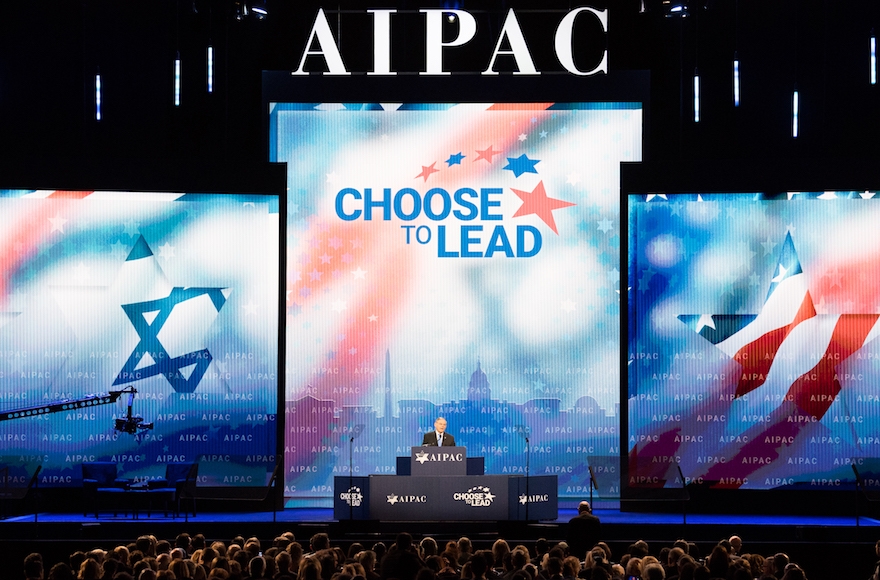 A view of the AIPAC conference at the Washington Convention Center, March 6, 2018. (Michael Brochstein/SOPA Images/LightRocket via Getty Images)

(JTA) — At its annual policy conference last week week, AIPAC made a high-profile, widely discussed bid to bring progressives back into the fold. Those efforts revealed that the organization’s leaders understand that their particular brand of Israel politics is losing support — but that they still may not understand why.

“The progressive narrative for Israel is just as compelling as the conservative one,” AIPAC’s president, Mort Fridman, declared in his opening remarks. He assured progressives that “we are partners in this project.”

As progressives who have dedicated our lives and careers to the future of the State of Israel, we agree that there is a compelling progressive narrative for Israel. The argument that “Israel’s security cannot be fully ensured and a promise cannot be fully realized until she is at peace with all her neighbors,” which AIPAC’s CEO Howard Kohr shared with the crowd during his welcoming remarks, is one that we have each made time and again.

Sadly, the current reality of Israeli government policy does not reflect or advance this vision of a secure, democratic homeland for the Jewish people. Instead, it imperils it. The Netanyahu government has dedicated itself to entrenching and justifying a military occupation that results in daily violations of the human rights of Palestinians while undercutting the prospects for the two-state peace agreement that AIPAC claims to support.

The current government of Israel has endeavored to erase all distinction between the democratic State of Israel and the territory it occupies in the West Bank without any objections from AIPAC. This government is carrying out a steady assault on democracy — attacking human rights defenders as traitors, passing laws that restrict free speech and stepping up discrimination against non-Jewish minorities. Like previous Israeli governments and despite promises to the contrary, this one condones policies that restrict the religious freedom of non-Orthodox Jews, including limiting the right of Conservative and Reform rabbis to perform marriages, conversions and divorces, and arresting those who attempt to take part in egalitarian or women-led prayer at the Western Wall. 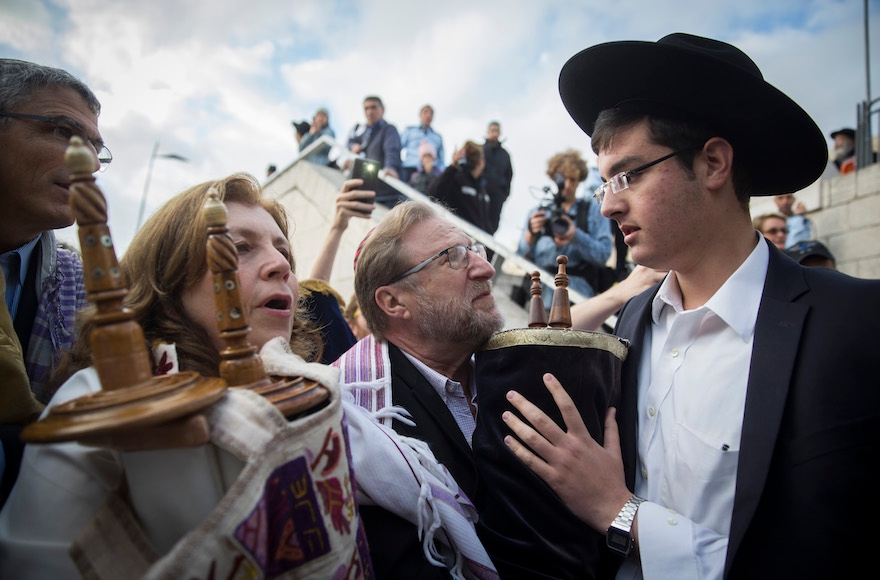 Haredi Jews trying to prevent a group of American Conservative and Reform rabbis and Women of the Wall movement members from bringing Torah scrolls into the Western Wall compound during a protest march in the Old City of Jerusalem, Nov. 2, 2016. (Hadas Parush/Flash90)

AIPAC steadfastly refuses to acknowledge or address this reality.

Instead of acknowledging the real threat that occupation, settlement expansion and anti-democratic legislation pose to Israel’s security and fundamental character, AIPAC has made it its mission to defend or provide cover for virtually every policy and action of the Netanyahu government. AIPAC ignores the fact that Israel’s current policies toward the Palestinians do not advance peace, but rather exacerbate conflict.

Yes, AIPAC does say that it supports a two-state solution, as Kohr reiterated during the conference. But real support for two states means telling hard truths about what it will take to achieve this vision and criticizing actions by all sides that undermine it. It means no longer defining pro-Israel advocacy as unquestioning support for the policies of the Israeli government. It means admitting that neither the U.S. nor Israeli governments today actively supports or endorses the two-state solution — and challenging them to change course. It means recognizing that while Palestinian leaders also shoulder responsibility for the ongoing conflict, blaming them exclusively for every impasse is misleading and wrong.

AIPAC should also be willing to confront Israel’s critics with powerful arguments, not work to penalize legitimate forms of dissent. The organization’s current approach to the BDS movement involves intense advocacy for federal legislation that, according to the American Civil Liberties Union, would violate the First Amendment by suppressing legitimate freedom of speech. How is battling the ACLU supposed to win back progressives? This legislation, for which AIPAC delegates lobbied in Washington, D.C., on March 6, also problematically collapses the distinction between Israel and the occupied territories.

AIPAC selected #ChooseToLead as its tagline for this year’s conference. But real leadership requires telling one’s members hard truths that they would prefer not to hear and confronting problems that are not easy to solve. Like AIPAC, we also celebrate and promote Israel’s many incredible accomplishments and achievements. But this moment requires more than this. It requires working to ensure that the existential threats of occupation and conflict do not imperil or undermine these successes.

Only that kind of work will ever convince progressives that AIPAC truly shares their values and goals.

(Jeremy Ben-Ami is the president of J Street. Rabbi Jill Jacobs is the executive director of T’ruah.)