A tale of two Holocaust stories 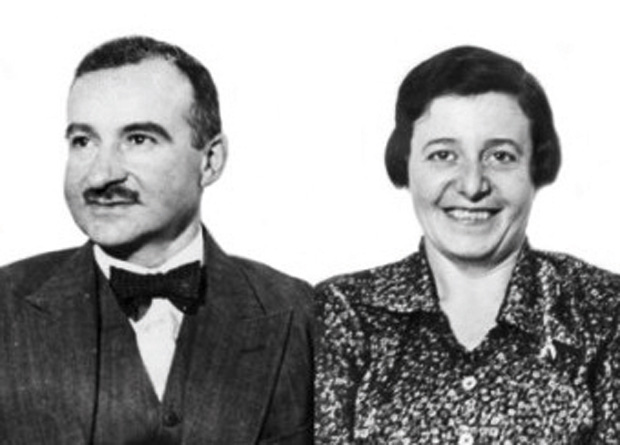 In a few more years there will be few, if any, Holocaust survivors left to tell their stories. We never want to stop honoring the six million Jewish victims of this atrocity, or in any way dim their memory or the memories of those who survived. Learning about this part of our history helps us — and our children and children’s children — understand the importance of tolerance as well as the human devastation that can come from blind hate.

To help make sure we don’t forget, many of the stories of the Holocaust have been published as books and memoirs or as oral histories. Some have been developed into plays and movies while others have been staged as reenactments and readings.

Two remarkable, though very different, one-woman theater pieces will be presented in the St. Louis area in the next week or so. “Miep Gies: Remembrances of Anne Frank,” will be performed by storyteller Dianne Moran, who assumes the role of Gies. The other is a dramatic work by JoAn Segal, based on “Gerda’s Story: Memoir of a Holocaust Survivor” by Gerda Nothmann Luner.

Moran, 68, lives in the Upper Missouri Ozark town of Richwoods. Though her father was Jewish, her mother was not and Moran was brought up Protestant. “We attended United Hebrew Congregation for a year,” says Moran. “That was the extent of my formal Jewish education.”

But as a teenager, after seeing the 1959 movie “The Diary of Anne Frank,” Moran knew that one day she wanted to portray Gies, who hid the Frank family and four other Jews from the Nazis in an annex in Holland during World War II.

Moran explains she had one Holocaust survivor in her family and “the memory of the tattoo arm was indelibly etched in my consciousness.”

So Moran, who describes herself as a “living history presenter” as well as a professional naturalist (she worked as one at the St. Louis Zoo for 23 years) created a program where as Miep Gies she shares her experiences with the Frank family and tells what transpired before and after she helped hide them.

“After the program, I step out of character and take questions,” says Moran. “There are a lot of aspects that can be discussed to help the audience understand how the Holocaust came about. I have a large display that I bring with me that shows the involvement of America during the war in terms of our soldiers and the war effort itself but not saving the Jewish people.”

Moran has been portraying Gies for about a year in the Kansas City schools through the Young Audiences program there. Since 1992, she has appeared at Chautauquas around the country, inhabiting characters such as Mary Surratt, the first women executed by the U.S. government for her involvement in the Lincoln assassination, and Sacagawea, the only Native American woman to accompany Lewis and Clark on their expedition.

At the age of 12, Gerda Nothmann and her younger sister, Vera, were sent from Berlin by their parents to different foster families to escape the anti-Semitic atmosphere sweeping throughout Germany. Gerda went to live with the kindly Deen family in Holland.

Writes Gerda: “My parents took me to the Templhof Airport on June 10, 1939. There we kissed each other goodbye — my parents were so brave, all of us expecting to be together again in a few months. I never saw my parents again.”

After being sent to the Vught Concentration Camp in Holland in 1942, Gerda was placed in a special group organized by Philips Electronics of Eindhoven to manufacture radio tubes for the Nazis. On May 1, 1945, after surviving Auschwitz and other concentration camps, Gerda was liberated. Neither her parents nor her sister made it out of the camps alive. A year later, Gerda emigrated to the United States, where she eventually met and married Charles Luner and had two daughters.

“My mother always spoke to me and my sister early on about her experiences,” says Vera Emmons, Gerda’s daughter who lives in St. Louis and is named for her beloved maternal aunt.

In the 1970s, Gerda sat down and typed out her story. For her, it was an organized way to share her childhood experiences with her family. After she died in 1999, her husband decided to publish her memoir, along with family letters from her childhood, to honor her memory and serve as a legacy to her children and grandchildren.

Gerda had given these letters, written to her and to the Deens while she was in Holland, to a Dutch friend whose family went into hiding during the Occupation. After the war, the friend found a way to return the letters to Gerda. They were later translated and then edited by JoAn Segal, one of Gerda and Charles’ closest friends, as a dramatic reading, which she will perform at 4 p.m. Sunday, Aug. 18 at Congregation Shaare Emeth. 11645 Ladue Road.

The letters, several of which are also reproduced in the memoir in their original handwritten German, speak of parental advice, praise for Gerda’s accomplishments, the family canary and her grandmother taking an escalator for the first time. They also encouraged Gerda to learn as many languages as possible and to prepare to help with household duties when they were reunited.

“You must make yourself useful in the house as much as you can. It’s important for you to learn all that because when we are together in Chile, Vati (Gerda’s father) and I will have to go out to work every day to earn money and Omi (her grandmother) can’t take care of the house all by herself . . . That’s the way it is when you emigrate.”

But letters to others show the parents desperation as they outlined to the Deens (Gerda’s foster family) their plans to escape via Siberia and beg close friends who had successfully emigrated to the United States in the early 1930s for an affidavit to help them emigrate.

Segal’s performance is free but reservations are required and can be made by emailing [email protected] or calling 314-442-3711. Copies of Gerda’s book will be for sale, with all the proceeds benefitting the St. Louis Holocaust Museum. Light refreshments will be served after the event.

While this event has nothing to do with the Holocaust, five young local Jewish performers will take part this weekend in the Arch City Theater Troupe 9th Annual All-Student Musical Revue. Jessica Goldberg and Lillian Kanterman (above, from left), both of Central Reform Congregation;  Lauren and Jennifer Goldberg (at right) of Temple Israel; and Ally Kalishman (below right) of Shaare Emeth are among the 39 performers from 20 area schools (third grade through high school) who act, sing and dance to benefit JDRF (formerly the Juvenile Diabetes Research Foundation). This free event (donations are welcome) will feature songs from Broadway classics such as “Hairspray,” “King and I,” “Memphis,” “Little Shop of Horrors,” and “Sound of Music.” It takes place at 7:30 p.m. Friday and Saturday (Aug. 9-10) at the Pillsbury Chapel and Dale Williams Fine Arts Center at Missouri Baptist University. For more information, go to www.archcitytheatertroupe.org.