A Father’s Day story six decades in the making 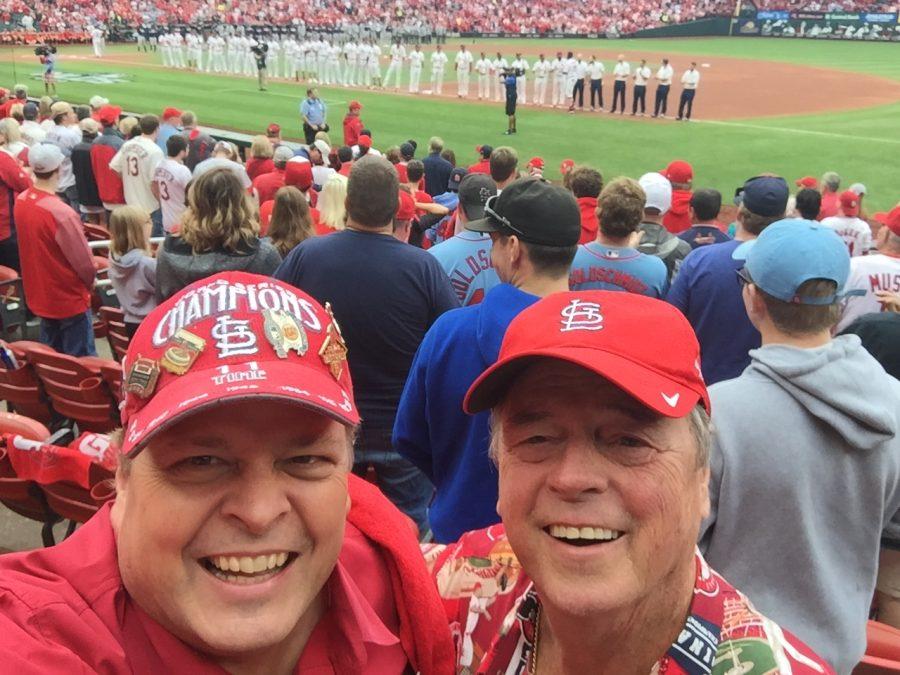 On Sunday, 77-year-old Barry Weinberg and his wife, Linda, plan to spend Father’s Day with their adult son, Dr. Dave Kersting, 58, and Dave’s wife, Dot, and daughter Katie, who will be a senior at St. Louis University. After all, that’s what we do on Father’s Day, isn’t it? We spend the day with our fathers if we’re lucky enough to have them nearby.

Except that in this case Dave, who is a veterinarian with his own practice in Chesterfield that treats household and exotic pets, has never spent a Father’s Day with Barry before. In fact, Dave only met Barry last September, when he placed a call to the then-stranger and asked, “Does the day Dec. 14, 1961 mean anything to you?”

Without missing a beat, Barry replied, “Yes. That was the day I had a son.”

“I think I am that son,” Dave retorted, to which Barry answered, “I am sure you are.”

How exactly could Barry be sure?

I’ll get to that in a minute, but for starters their voices sound exactly alike. And while neither knew it during that initial phone call, the two men also look identical. The resemblance is uncanny. But again, I’m getting ahead of myself. Let’s flash back to nearly 60 years ago.

This Father’s Day story begins when Barry, a lifelong St. Louisan who attended Congregation Shaare Emeth, fathered a son with his high school sweetheart in 1961. The two attended Parkway High (which today, says Barry, would be Parkway Central).

Barry and his girlfriend planned to marry after graduation. But Barry’s mother (his father had already died) and her parents wouldn’t hear of it, especially, says Barry, because she was a Catholic and he was Jewish.

“When I found out she had hadthe baby, I begged them to let me see her and the baby. They said absolutely not and told me the police were there,” Barry recalled. “I went to their house anyway. The cops stopped me, so I never got to see her or speak to her again.”

The baby was placed with Catholic Charities where he was adopted by a couple in St. Louis a week later.

Fast forward to 1987, when Dave Kersting contacted Catholic Charities to find out about his birth parents. At the time, the only way the organization would release that information was if the birth parents had agreed, which wasn’t the case.

“My wife and I were trying to have kids and had been unsuccessful,” said Dave, who is the official veterinarian of the St. Louis Aquarium and a staff vet for Grant’s Farm and the Sophia M. Sachs Butterfly House. “We were interested in my medical history as well but couldn’t get anywhere with Catholic Charities.”

“The certificate had my (birth) mother’s name on it, but the father was blank,” said Dave. “It had an address on Lindell, which I presume was my home address. My wife, my daughter and my uncle all began investigating the name, trying to locate my birth mother. We spent a month or so doing that. Then one day my wife and I called her and told her my story. I said, ‘I think you may be my birth mother.’ And she said, ‘No, I’m not, but good luck finding her.’

“When we hung up the phone my wife and I immediately said to each other, ‘That’s her.’”

About 10 days later, she called Dave and admitted she was his birth mother. She said she was caught off-guard but had never told her husband and children about Dave and wanted to keep it that way. She said she would try to track down the birth father and make sure it was OK with him to release his information to Dave.

After six months of not hearing anything, Dave again called his birth mother who told him she couldn’t find his birth father. But she said his name was Barry Weinberg and she thought he was the trainer for the St. Louis Cardinals.

“We researched that and determined it wasn’t possible because he would have only been 11 when I was born,” said Dave. When he called his birth mother back to say he wasn’t the right Barry Weinberg, she told Dave all she knew was that Barry had married a woman named Linda and they had two daughters. She also said she and Barry had attended what now is Parkway Central.

A trip to the high school in the summer of 2019 proved fruitful. School yearbooks revealed pictures of both Dave’s birth mother and her boyfriend, Barry Weinberg.

“I then did some more digging and contacted Barry,” said Dave. “His comment was, ‘I am most certainly your father and I’ve been waiting 57 years for you to contact me.’ ”

Barry had told his wife of 47 years about Dave, though their grown daughters didn’t know.

“[My parents] called and told me they needed to come out right away and talk to me without my kids around,” said the Weinbergs’ oldest daughter, Rebecca Dean, 41, who is married with four children. “Right then, I wrote a letter and put the date and time on it. I didn’t know what they were going to tell me, but I said (in the letter) that I always had a strong feeling I had a sibling, my whole life. I always wanted an older brother because all my friends had one.”

When Rebecca’s parents told her about Dave, she couldn’t have been more excited. She says the two talk every day now and she couldn’t imagine life without him.

“He’s the absolute best. We have the same mannerisms and energy,” she said. “He calls my kids every day, too. They just adore him. It’s so neat to have him in my life, especially with my parents getting older.”

When Rebecca found out that her parents and Dave’s family live just a couple of miles apart in Wildwood and Chesterfield, respectively, she wondered how many times they must have passed each other in the grocery store.

Other similarities abound. Both Dave and Barry, who is a retired businessman, lost their fathers when they were 16. Both men put themselves through college, first attending UMSL, then Mizzou. Barry’s younger daughter Jennifer and Dave’s daughter Katie are adopted. Rebecca and Katie attended St. Joseph’s Academy; Rebecca graduated in 1997, Katie in 2017.

And perhaps in the oddest twist of fate, Dave’s name on his birth certificate was Jerome Stanley, which happens to be the first and middle name of Barry’s deceased father. Yet both Barry and Dave’s biological mom insist that no one, including her parents, knew Jerome Stanley was Barry’s father’s name.

Dave’s mother passed away two years ago. He thinks finding his biological parents would have made her uncomfortable, but he knows she would have liked the Weinberg family.

“I’ll admit when Dave first was going to come over, I was a little worried. It felt funny to have him come into our house without knowing him,” said Linda. “But as soon as he walked through the door, I was thrilled to death. And they looked totally identical. Even their voices are the same.”

Barry can hardly contain his joy in being found by Dave after nearly six decades. “I’ve always dreamed of having a son and now I do,” he said. “It’s like looking in a mirror when I see him.

“I’m even enlightening him about Judaism, not to convert him but so he has a better understanding.”

The two meet for breakfast every Tuesday, even if it means social distancing, and cannot wait for Cardinals baseball to start again. Barry is a season ticketholder and they are both diehard fans.

And while Dave isn’t sure what he and Dot will cook for “Mom and Dad,” as he now calls Linda and Barry, on Father’s Day, he knows he can’t lose if he decides to bring in Barry and his favorite food.