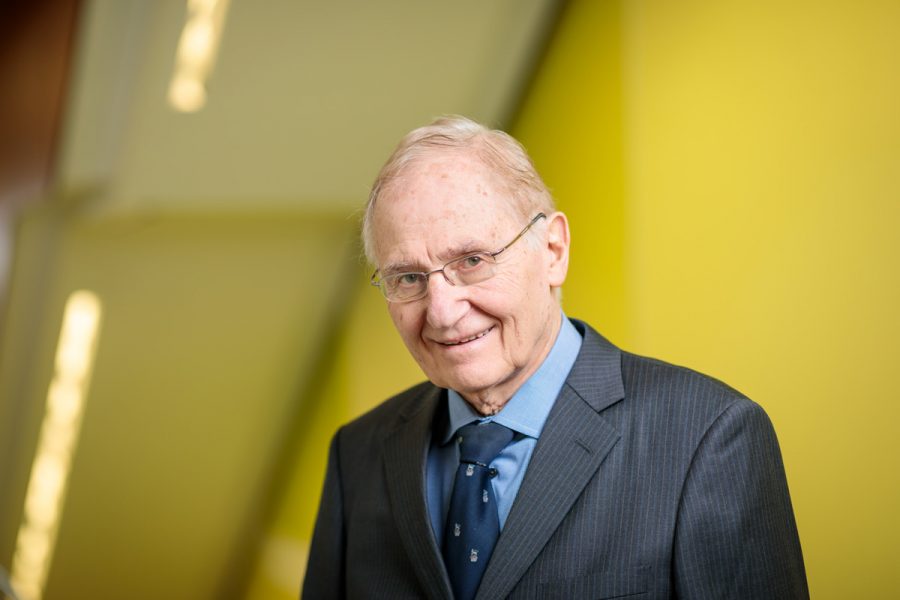 BY DAVID BAUGHER, SPECIAL TO THE JEWISH LIGHT

Dr. Steven Teitelbaum likes to use words like “fortunate” or “lucky” to describe the accolades he’s earned in his career.

But the reality is that the most recent winner of the King Faisal International Prize in Medicine didn’t accumulate his honors through happenstance. The work he’s participated in on bone health during a half-century as a professor at Washington University School of Medicine has been groundbreaking, leading to therapies for everything from osteoporosis to rheumatoid arthritis.

Still, Teitelbaum, 80, who will share the Faisal Prize with Harvard’s Bjorn Reino Olsen, is modest about the achievement,  saying the focus shouldn’t be on him but rather on the potential of the research to help others.

In fact, Teitelbaum, winner of the Peter H. Raven Lifetime Achievement Award as well as honors from the American Society for Bone and Mineral Research and the American Academy of Orthopaedic Surgeons, continues to be modest about his life story, insisting that his career was just a way he found to make a living.

“I grew up in Brooklyn. You either became a doctor, a lawyer or you went to jail,” he said with a chuckle.

Teitelbaum’s long association with Washington University began when he attended its medical school. After a brief return to New York, he came back to St. Louis in 1968 and has been here ever since.

“Like anybody who has been in this business long enough, you get a lot of offers, but this institution is very unique,” he said of his alma mater. “No medical school is as collaborative as this place, and my sense is that it really made my career.”

What does your research focus on?

My career has been spent looking into bone and bone diseases such as osteoporosis and diseases in children who have what is called brittle bone disease. We try to figure out what are the causes, particularly focusing on a cell that is needed to break bone down and reabsorb it. People don’t realize this but for a normal skeleton, you have to have cells that make bone and break it down. That’s how you replace old bone with new. My career has been focused on the latter, looking at cells that break them down, figuring out how they work. The result of this has been that we’ve contributed to the development of drugs that have markedly reduced the incidents of osteoporosis and have also had an effect on cancer metastasis, particularly breast cancer metastasis to bone.

Why did you choose this career? What appealed to you about being a doctor?

The reason I initially went into medicine was to make a living, to do something that was respected in the neighborhood. My original goal was to become a doctor, go back and take care of the neighbors in Brooklyn. It never crossed my mind that I’d be a scientist. That really came later. When I went to medical school, when I started realizing that the great thrill of all of this was taking care of people, helping them and teaching young people how to do the job.

Why did you decide to specialize in bone issues?

Again, it was good fortune. When I finished my medical training, I took a job at Jewish Hospital, met my mentor there, a guy named Lou Avioli. He convinced me that doing research was a lot of fun. He had been brought to Washington University to start a program in bone diseases.

So what’s the payoff of this type of research?

What kinds of illnesses do you study?

The hallmark disease that we work on is osteoporosis. If a woman is 65, she has a 50 percent chance of developing a fracture due to osteoporosis. We also do a lot here on rare diseases because rare diseases teach us about common diseases. I got into this area of research because I was involved early on in my career in the first cure of a fatal bone disease. It was a 3½-month-old little girl who had this disease that was incurable, and we had an idea of how to cure her by bone marrow transplantation. It is now standard therapy for this. I think curing rare diseases in many ways is as important as curing common diseases.

What do you want the general public to know about bone health?

I think it is important that people understand that we have a problem with osteoporosis because women are reluctant to take therapy for it. We want them to understand that there are very good therapies for it now, and they’ll be getting better.