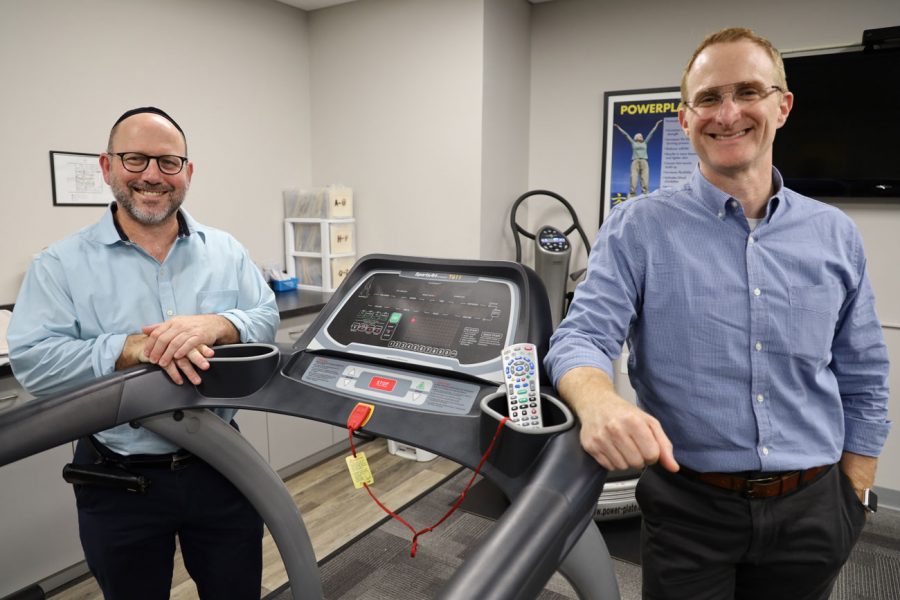 BY BILL MOTCHAN, SPECIAL TO THE JEWISH LIGHT

A few months ago, Michelle Goldstein and her husband were preparing for a trip to Portugal. They planned a lot of walking, knowing they’d encounter countless stairs. There was just one problem: Michelle’s knee began hurting weeks before the trip.

“I couldn’t even climb the steps in our two-story house without being in pain,” she said.

With precious time to spare, Goldstein got the treatment she needed and had full mobility for the trip during which, she said, she “climbed a million steps!”

The physical therapy Goldstein received came courtesy of RPI Therapy Services. RPI has 100 employees at facilities throughout the Metro region including Creve Coeur (at Covenant Place) and Clayton, and in Southern Illinois and the Chicago area.

The genesis of the 22-year-old company is an extreme example of Jewish geography. The founders of RPI, Jonty Felsher and Jonathan Gordon, are both Orthodox Jews who are natives of Johannesburg, South Africa. Here’s the weird part: The two never met until they relocated to St. Louis.

Felsher, 51, arrived here in 1993 with his new wife. He’d recently graduated from the University of the Witwatersrand with a physical therapy degree. The Felshers, like many others, were uncertain of their future in their homeland and sought a fresh start. Their timing was good because at that time, the United States had a shortage of physical therapists.

“We were both exposed to what was going on in South Africa at the grassroots level,” Felsher said. “I was working in one of the largest teaching hospitals in Johannesburg, and black people were segregated at the hospitals. My wife was working on a research project on how HIV/AIDS was being portrayed in the media. She was doing research in the rural areas. There was a period of uncertainty, what was looking like a possible civil war.

“In the late 1980s and early 1990s, there was a shortage of PTs in the U.S. medical schools, and PT schools weren’t turning out enough PTs, so companies were recruiting foreign-trained PTs. It just so happened that my wife’s uncle lived here in St. Louis. We wanted to leave South Africa because of the political uncertainty, and we moved to St. Louis because my wife had family here, two uncles, and they were our closest family living abroad.”

Gordon, 55, arrived in St. Louis in 1994. Like Felsher, he was looking for a change. He had his own PT practice and was negotiating to acquire two others. Those deals eventually fell through. There was also a more critical matter of personal safety.

“There was a lot of crime and violence (in South Africa),” Gordon said. “My next-door neighbor was shot coming out of his driveway.”

Gordon graduated from the University of Cape Town in 1987, earning a physical therapy degree, specializing in sports injuries and manual therapy. Like Felsher, he had family in St. Louis. For him, moving 8,000 miles to a new culture was painless.

“It was just a very positive experience, and we wanted to get out of South Africa,” he said. “This was a soft landing for us.”

Although Felsher and Gordon never met in Johannesburg, they had crossed paths.

“I worked for someone for a year before I started my practice in South Africa,” Gordon said. “When I left, Jonty replaced me in that job. We never really met, but he saw the patients I left behind when he got there, and he saw my name on the notes.”

The two met in St. Louis and hit it off immediately. They shared a similar philosophy of patient care, and had much more in common.

“Jonathan and I met straightaway because we were part of the Orthodox Jewish community, and both of us are physical therapists and South Africans, and there’s not a large community of those three,” Felsher said.

“I think the thing that attracted me to St. Louis was the Jewish community, and the fact that it was small, that there was an opportunity to be part of something that was growing, that was vibrant,” he said. “We’ve grown so much in the last 25 years, and I’ve been lucky to be part of the growth.”

Felsher is currently board president at Young Israel of St. Louis.

“The community really embraced us when we arrived,” he said.

Typically, Felsher can be found at the RPI location at Covenant Place while Gordon oversees the Clayton office. I met the two partners together in mid-September while they were going over budgets. It’s something they do in person once a month, a necessary part of their role. Neither was having much fun. For them, the enjoyment of the job is seeing patients, working with them in the clinic.

Felsher said the mission of RPI is compassionate, quality care in a cost-effective manner. He and Gordon emphasize hiring the right people who share that philosophy.

“Something we really pride ourselves on is finding the right people to work as PTs, people who like working with seniors, in a senior building, and really trying to create that feeling of treating this as more than just a job,” Felsher said. “We are focused on our patients but also on our staff. Our goal is for our staff to want to stay with us.”

“One of our strengths is that Jonathan and I, as owners, have maintained a hands-on approach, not just managing the business, but also, in our clinical roles treating patients,” Felsher said. “I would hate to give up the clinical aspect of the job.”

In fact, Felsher had treated Goldstein the first time she visited RPI a year and a half ago for a shoulder muscle injury. She appreciated his practiced skill and methodical approach to helping her gain mobility. As a bonus, the two bonded over a shared experience of having adult children who volunteered to serve in the Israeli army.

“We had this crazy coincidence,” Goldstein said. “My daughter and Jonty’s son both joined the Israeli army, and it turned out they had their basic training at the same army base in northern Israel at the same time.”

As RPI grows, the two partners naturally assume more responsibility. Felsher describes the organization as being in a “steady growth” mode.

“We’re not trying to be the next mega therapy companies,” he said. “We have expanded into Illinois and have interest in other states, but crossing state lines as a Medicare provider brings a whole new set of challenges in terms of setting yourself up as a rehab agency.”

Felsher and Gordon say they place a premium on quality.

“We’re committed to a Jewish way of life,” Felsher said. “In addition, as health care practitioners, we are passionate about what we do, and we view our ability to help people manage issues and get healthy as our way of making a contribution to our world. I certainly think there’s a connection between our Jewish values and our clinical philosophy and ethics, which help in our mission to make people’s lives better.”

Gordon echoed his comments, saying: “Part of our mission as a Jew is to be the best we can be in all ways including professionally. So, whatever you do, you’re an extension of G-d’s hands. It has always been our goal to provide the best therapy in a nurturing and friendly environment. We want each person who comes through our doors to feel as if they are important and that we will do everything that we can to help them heal and get better. We also want them to feel as if they are part of the extended RPI family.”