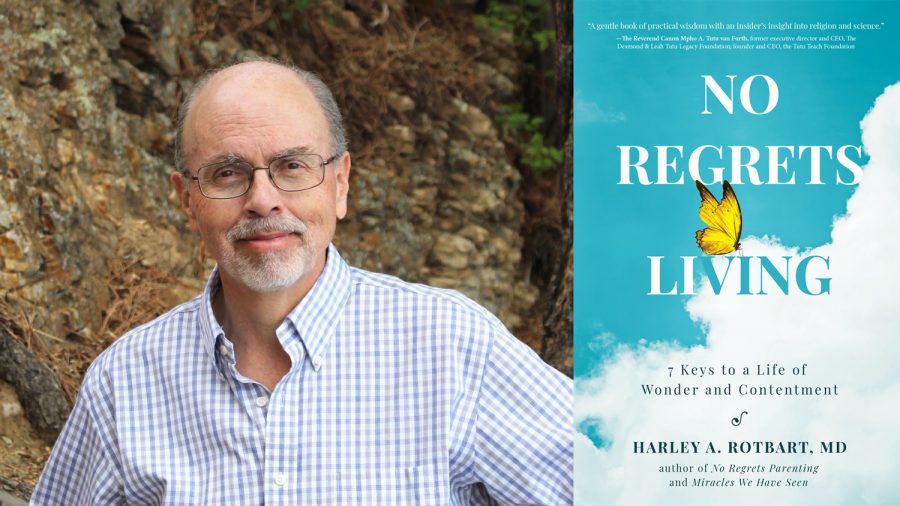 Dr. Harley Rotbart, a Jewish physician in Denver, in the author of “No Regrets Living: 7 Keys to a Life of Wonder and Contentment” (272 pages, Health Communications, Inc.)

Dr. Harley Rotbart’s latest book, “No Regrets Living: 7 Keys to a Life of Wonder and Contentment,” is a wise, open-arms, inclusive read. Irrespective of religion or rank, the reader is on every page.

This felt commonality with Rotbart, a Jewish physician in Denver, testifies to his empathetic orientation toward humanity.

“No Regrets” explores major existential questions (science and G-d, for starters), and shares miracles that formed the core of his previous work, “Miracles We Have Seen.”

This time, however, he hones in on signs accessible at the heart-mind level that occur in our daily lives — if we simply pay attention. Virtually every conceivable doubt, and hope, is expressed in this book.

Rotbart presents seven keys (actions), each containing related stems, that lead to a fulfilled life that is, a life free of regrets:

Adherence to a particular religion and even religion itself are omitted from the journey. It’s more of a whatever-fits model rather than one size fits all.

“It’s not really about what you believe, but that you believe — in something greater than yourself, in an unknown and unknowable reality,” he writes in the first chapter, “Believe.”

Rotbart’s examination of the Big Bang, a science vs. G-d debate, faces off two oppositional views of creation and merges them into an unexpectedly unified conclusion.

On May 20, 1964, two astronomers who regularly listened to cosmic noises picked up an “echo” that could be heard continuously and uninterruptedly.

Scientific data that determined the echo was a remnant of the Big Bang changed science forever. (Doubters can access the echo, which continues pulsing today, on internet astronomy channels.)

Prior to the 1964 discovery, general wisdom and the lack of contradictory evidence claimed that the universe had always existed — no beginning, no end.

“Believe,” the first key in Rotbart’s seven-link chain to living a life without regrets, is one of the most powerful chapters in the book.

Rotbart, an infectious disease specialist, accepts that the Big Bang burst into being through “an infinitesimally small and unimaginably compact singularity containing every bit of matter and energy that would comprise our universe.”

But the question that really intrigued him was, “What happened before that cosmic beginning — the source of that unimaginable singularity that created our universe?”

Enter the G-d concept, which ascribes an omnipresent, omnipotent Creator behind the Big Bang. How did this singularity produce a universe governed by natural laws and create everything visible to the naked eye as well as invisible swaths beyond our grasp?

“I see science as evidence (I won’t use the word proof) of a higher power.”

Chapter 2, “Discovery,” which introduces readers to miracles in the natural, Biblical and medical worlds, also explores the Butterfly Effect, signs, coincidences, and the messiah spark in everyone.

“Don’t panic,” Rotbart says. “As I promised earlier, I haven’t had, and won’t be sharing, divine revelation experiences or asking you to have them.

“Rather, I ask only that you sharpen your awareness of phenomena you already know well.” The discover key “is an exercise in consciousness-raising.”

Whether the topic is gratitude or self-forgiveness, each chapter bears the dual stamp of Rotbart’s hands-off gentility and experiential endorsement.

How you actualize his suggestions is entirely up to you.

Everyone is welcome here.

Separate, gray-framed areas on COVID-19 integrate with the text to illustrate a particular concept (like the Butterfly Effect) and also give a blow-by-evolutionary-blow account of the crippling pandemic.

For example, “There isn’t a greater example of the Butterfly Effect than the COVID-19 pandemic, beginning as a single event in a single location and spreading to impact the lives of virtually every person on Earth,” he writes.

Just as readers will likely recognize themselves on the pages — in an emotion, a situation, obstacle, crisis, loss or strength regained — they will learn a great deal about Dr. Harley Rotbart.

The introduction, part homage to his father who survived Auschwitz, also discloses Rotbart’s open-heart surgery over six years ago. He hides nothing, and uses everything.

In chapter 7, we can almost hear him praying for his mother’s comfort as she lay dying, only to witness the suffering she endured in her last hours.

His mother had suffered several strokes. Recovery was medically impossible. Rotbart did not pray for a miracle. He just wanted her to feel at peace.

“My mom’s final 24-hours were not comfortable; she struggled and suffered,” he writes. “We couldn’t seem to make her comfortable.”

But he never argued with G-d. Instead, he said prayers of gratitude for her long life and infinite joyous times — “my daily ritual of remembering all there is to be grateful for.”

His belief system acknowledges that “I won’t always understand life’s events, and only sometimes will I be conscious of my prayers possibly being answered . . .

“And even when it does seem like my prayers are answered, I recognize that it may be my imagination or wishful thinking; I may be the only one hearing my prayers — I’ll never know for sure, at least in this life.”

But he did acquire something he will never question: “Mom’s death taught me that gratitude for all we have can overcome the grief at what we’ve lost.”

Every personal moment, regardless of awe, doubt, joy or agony, is a teaching lesson for Rotbart.

This is his gift to us.

For anyone paralyzed in a prison of hopelessness, “No Regrets Living” is an excellent place to start picking the locks.