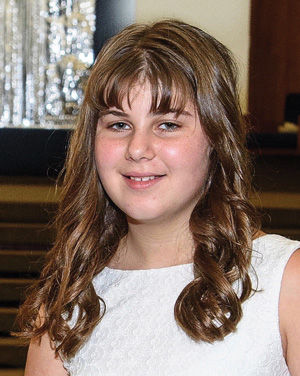 Katie, daughter of Laura and Michael Silver of Olivette, has a passion for feeding people. While she and her family were visiting Philadelphia two years ago, they saw a number of homeless people and her heart went out to them. “Katie started collecting food at our meals and handing it out to people on the street,” said her mother, who is Secretary of the Board of Trustees at the Jewish Light and one the paper’s regular bloggers. “She continued to do so when we traveled to Washington D.C. later that year.”

Like her step-grandfather, Harvey Kornblum, Katie abhors the idea of people being hungry. When it was time to think about her mitzvah project, she decided to support three organizations focusing on hunger.

The first was Places for People, an organization that provides services to those with serious mental illnesses and helps them live life to their fullest potential. Katie spent a day there and prepared 58 sack lunches that were given to the residents.

Katie also volunteered at Room at the Inn, a temporary, emergency shelter for homeless women and families. Held on the first Monday of the month at Congregation Shaare Emeth, she played with the children of a homeless family and helped prepare dinner.

The Ladue Middle School student said she liked doing this project because she knew it made a difference in someone else’s life as well as her own. Katie said, “I learned that not everyone is as fortunate as I am, and that being an active community member, will benefit myself, and others in the future.

Katie’s twin brother, Ryan, has been entertaining residents at Covenant Place, a community for seniors. For his mitzvah project, Ryan played piano before dinner once a week during the spring, and since his bar mitzvah, he has continued playing once a month. During that time, Katie greets residents and then serves dinner. At times Ryan joins her and serves dinner, too.

“When I first started, I was nervous to play in front of them, but soon realized there was no reason to be,” Ryan said. “Over time, I began to look forward to it and they would look forward to having me. They were very accepting of me and I got more confidence the more I played.” A classically trained pianist, Ryan often plays Beethoven, Tchaikovsky, Mendelssohn, and, his favorite, Bach.

Ryan is also a student at Ladue Middle School and plays piano competitively. He has been in three competitions and always placed second or third. He continues to play at Covenant Place sharing his music and brightening everyone’s day. He learned that when you give of yourself, you end up getting much more in return.