Mitzvot from the Heart: Jacob Stone 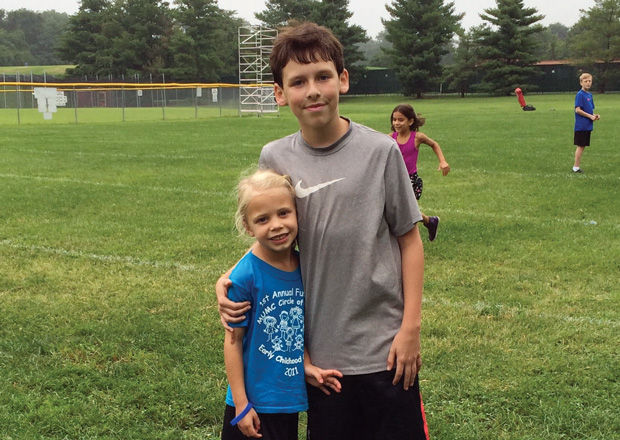 Jacob Stone and his cousin Eva (above) at the kickball fundraiser Jacob organized to benefit the Dystonia Medical Research Foundation.

Jacob Stone found inspiration for his mitzvah project close to home, in a medical condition affecting his grandfather: cervical (head and neck) dystonia.

Dystonia is a neurological movement disorder, in which the muscles contract, causing twisting and repetitive movements or abnormal postures. The disorder may be hereditary or caused by other factors such as birth-related or other physical trauma, infection, poisoning or reaction to pharmaceutical drugs.

Jacob, son of Amy and Jeff Stone of Creve Coeur, wrote on a fundraising webpage that he was moved to help the Dystonia Medical Research Foundation.

“I felt very strongly about raising money to benefit DMRF,” wrote Jacob, a student at Parkway Central Middle School. “I saw what dystonia can do to someone first hand and I wanted to make a strong impact to help fund research to find a cure.”

The webpage (http://bit.ly/jacob-stone) notes that within two weeks, his grandfather’s life was abruptly changed.

“For most people living with dystonia, their stories have struggles as with any disorder, but my Grandpa’s struggle was not normal and we quickly knew his case was rare,” Jacob wrote.

In the five years after his diagnosis, Jacob’s grandfather has had several surgeries and the care of several leading doctors in Cervical Dystonia research.

For a fundraiser, Jacob invited 25 kids to participate in a kickball game. Between online donations and the game, he has raised just over $1,000.

Mitzvot from the Heart is compiled by Editorial Assistant Elise Krug. To have your child’s mitzvah project featured, contact Elise at 314-743-3671  or [email protected]