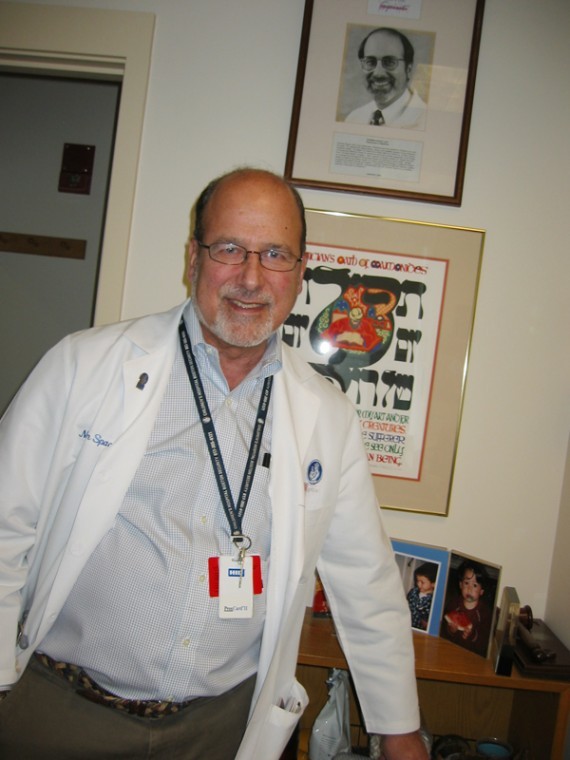 BOSTON—In a family of prominent Jewish educators, Norman Spack could be called the rebel. He became a doctor.

“I’m the only one who didn’t go into Jewish education,” quips Spack, a senior associate in the endocrine division at Boston’s Children’s Hospital, where he has worked for 39 years.

Spack’s father, Abraham, was a nationally acclaimed Jewish educator in Boston, and his brother, Eliot, is a recognized Jewish educational leader. But now the 68-year-old physician and assistant professor at Harvard Medical School in his own fashion has joined the family business.

As the co-founder of the country’s first clinic devoted to treating children with gender disorders, and as a leading authority on transgender youth, Spack has found himself at the forefront of efforts to educate the public about a widely misunderstood condition and to help transgender people secure their fundamental rights.

“If we shun people, we never get the experience of knowing how special they are and understanding how courageous they are,” Spack told JTA.

A pediatric endocrinologist with deep roots in Boston’s Jewish community, Spack was first exposed to transgenderism, a medical condition in which individuals do not identify with the gender into which they were born, in the mid-1970s. Spack at the time was treating street kids as a volunteer on a medical van in Boston. Many of the young people were “throwaway kids,” Spack said, having been shunned by their families and schools for gender variant behavior.

A decade later, a colleague referred a transgender patient to Spack—a young adult Spack referred to as M. Unlike the street kids he’d seen earlier, M was a Harvard graduate.

M would open up a whole new world for Spack. In exchange for medical care, he introduced the doctor to his friends, other young adults who were transgender.

“It was this unique opportunity to see life from a different perspective,” Spack told JTA. “M did it for me.”

The experience proved to be a turning point. Spack began providing medical care for young adults and later older adults who were transgender. At the time, many physicians were reluctant to take on transgender patients; it’s a problem that continues today.

In 2007, Spack co-founded the Gender Management Service Clinic, or GeMS, at Children’s Hospital. The clinic has treated nearly 100 patients, most for birth disorders or other sexual development conditions.

About one-third of the patients are treated with hormonal suppressants that delay the onset of puberty—a controversial treatment that is fully reversible. Spack acknowledges the opposition to this sort of early intervention, but argues that transgender youth have high rates of self-harm and suicide attempts. Nearly a quarter of the patients who come for a first visit have committed some act of violence against themselves.

Treating these young people with hormonal suppressants is a way of buying them precious time, Spack argues. When they are teens, they are better able to decide whether or not to take the next step of taking the hormones of the opposite sex that triggers permanent physical change.

“If your neighbor is bleeding by the side of the road, you shall not stand idly by the blood of your neighbor,” Spack said, quoting Leviticus as his inspiration.

It’s a lesson Spack learned the hard way. About six years ago M, his first transgender patient, committed suicide. Raised in a Jewish family, M’s parents initially had great difficulty accepting him. Nevertheless, Spack learned that M’s rabbi had officiated at his funeral, which was a source of great comfort to the family.

To help avoid such tragic outcomes, Spack works to reassure children facing gender disorders that God has not played a trick on them.

“I say, ‘nobody has played a trick on you,'” Spack said. “I say, ‘things happen. It’s not because of anything you did. It’s our job to find a way for you to be balanced, for you to be happy.’ “

Spack describes his own childhood in suburban Boston in adulating terms. His small Brookline neighborhood was like a little shtetl, he says, and he grew up half a block from Kehillath Israel, where his father was education director and where he attended religious school. Summers were spent at Camp Tevya, where Spack met his wife.

“Later I realized I was exposed to some of the finest role models a human can ask for,” he says, rattling off the names of admired leaders in the Boston Jewish community.

Spack went on to become one of those leaders, serving as board chairman of Boston’s Hebrew College, where he earned an honorary degree in 2002, and as chair of the medical team for Boston’s Combined Jewish Philanthropies, a post in which he led three medical missions to Israel. CJP Executive Director Barry Shrage says Spack was responsible for attracting younger members and women to leadership positions.

In 2008, Spack was part of a coalition that included Jewish organizations such as the Jewish Alliance for Law & Social Action, Keshet and the Anti-Defamation League that persuaded the Massachusetts legislature to adopt a transgender rights bill. Spack’s testimony before the legislative committee considering the bill “was very powerful,” said Rep. Carl Sciortino, who introduced the bill, which was signed into law last November.

Transgenders have also made inroads in Jewish life in recent years. A growing number of trans-friendly Jewish resource and advocacy organizations have sprung up nationwide—including JewishTransitions.org and TransTorah.org, websites that provide resources aimed at helping transgender Jews assimilate more fully into communal life, including rituals and blessings for transgender ceremonies.

“Both in health care and in the Jewish community, Norm is a true pioneer who has made it possible for so many transgender people to be their full, authentic selves,” Idit Klein, the executive director of the Boston-based Keshet, an advocacy group for GLBT Jews, wrote in an e-mail to JTA. “I remember seeing him stand up at a Jewish federation gathering and speak passionately about his commitment to trans health care and equal rights for all. What’s more, I’ve seen people listen and learn.”

Spack says his work with the transgender community and their families has transformed his life.

“I’d probably be retired or far less fulfilled in my work,” he said. “I feel privileged to come into daily contact with people I think are heroes.”