Two worlds don’t have to collide: A guide for grandparents of teens 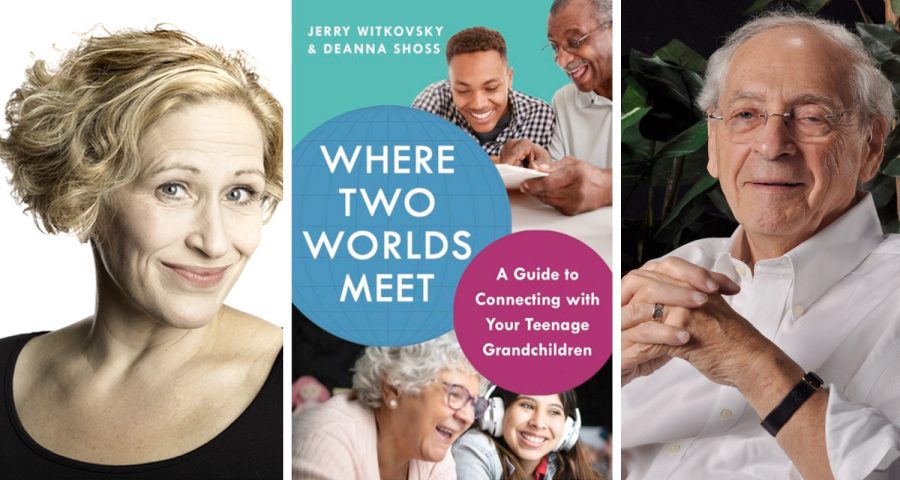 Deanna Shoss and Jerry Witkovsky are the authors of “Where Two Worlds Meet: A Guide to Connecting With Your Teenage Grandchildren.”

As a grandma with two amazing granddaughters, ages 6 and 4, I’ve got to say, life doesn’t get much better. They’re at the ages when they are so happy to see me, especially if it’s for a sleepover because they love to play “interview” at bath time. I pretend to be a reporter — granted, not much of a stretch — and ask them all kinds of questions about everything and anything I can think of, and they happily answer, laughing and splashing in the tub. I even bought a plastic microphone at the dollar store, which I hold near their mouths to make our interview seem more official.

It’s easy when they are this young. They adore you, and you adore them. I’m lucky that my granddaughters live in town, so I can see them often. But I wonder what it will be like when they become teenagers. Will it still be fun and cool to hang out with GaGa, as they call me, or will visits become more of a chore, especially when their friends beckon? Worse, will they look at me as irrelevant, as if I couldn’t possibly understand the pressures and demands of their busy teenage lives?

I thought about these questions and more when I dug into a new book called “Where Two Worlds Meet: A Guide to Connecting With Your Teenage Grandchildren,” written by social worker/community activist Jerry Witkovsky and Deanna Shoss, a St. Louis native who has an intercultural marketing firm (more on what that is later).

Shoss said they focused on the teenage years because that’s when youngsters face challenges of peer pressure and deciding who they want to be. They start formulating ideas and developing opinions.

“It’s the time of their lives when they are figuring out who they are going to be as independent people out in the world,” said Shoss, who lives in Chicago but grew up in St. Louis, graduated from Parkway North and attended Temple Israel. “Developmentally, their brains are fully online, but the logic and reasoning part of their brain isn’t fully formed, so it can be a hard time developmentally.

“We also felt the timing of this (book) is especially critical now because of the mental health crisis among teenagers in the U.S.”

The book, through a variety of action items spelled out in each chapter, urges grandparents to understand what life looks like through the child’s eyes and suggests that grandparents also share their experiences with their grandchildren.

“Experience the world as they see it, and don’t be afraid to let them into your world, too,” the authors write.

Grandparents, they say, can assume an extremely supportive role in helping their teenage grandchildren realize that they aren’t alone and have a true partner.

Each chapter includes activities designed to bring families together across generations, from how to engage in storytelling around life’s milestones to leaving a legacy of values. Sprinkled throughout are letters written by grandchildren who explain the lasting impact of what they learned from their grandparents.

“There is no question that grandparents can have a transformational effect on their grandchildren,” Shoss said.

The overarching theme of the book — where two worlds meet — is about entering your grandchildren’s world and inviting them to enter yours, but doing so nonjudgmentally, she said.

“It’s understanding that your teenager’s world really is different,” Shoss said. “The technology they use, the pressures that they face, the impact of the pandemic — you can’t be judgmental.

“We would hear grandparents say, ‘Well they’re always on their cell phone.’ A grandparent who thinks that their grandchildren are the ones who need to change because they (the grandparent) didn’t do it that way in their day, and their way is better — that’s a nonstarter.

“Meet your grandchildren where they are. Understand and accept that their world is different from the one you grew up in and find those doorways that allow you to enter theirs.”

For example, Shoss says, follow each grandchild’s school website. Ask them to email their homework essays so you can discuss them. If you live close by, make a regular weekly dinner date. Share stories of lessons you learned growing up that is  likely to resonate with them today, like a first date or a favorite game as a kid or the worst fight you had with a sibling. Write them down to pass them on.

Use the same technology your grandchildren use: FaceTime,  Zoom. Follow them on social media (if they allow you). Send emails. Text, and if you don’t know how, learn.

“Grandchildren may not respond to phone calls, but they always respond to texts,” Shoss said. “Even something as simple as, ‘Hi, sweetie. I love you. I’m thinking about you.’ That’s a virtual hug, and those make a difference.”

Putting it all together

Witkovsky, who is 94, worked for the Jewish Community Center in Chicago for 47 years, 18 as general director. He’s a grandparent of six, with two great grandchildren and one on the way. Since retiring in the late 1990s, his focus has been on programs designed to keep grandparents engaged with their grandchildren during their teenage years.

Shoss, 59, said the two were introduced seven years ago by a mutual friend. She is fluent in four languages, and her expertise is helping people whose first language is not English — as well as people like Witkovsky who didn’t grow up with digital technology — adapt and communicate what they are doing to online platforms.

Since working together, they have created courses for grandparents, including a curriculum for schools that want to involve grandparents, and a program called Grandparents Write Your Story, in which grandparents receive writing prompts to tell stories from their lives to their families. More than 400 grandparents have participated in the program nationwide.

“It’s really important to share stories,” Shoss says. “We all have these milestone events, albeit decades apart, but these experiences bond generations.”

In the book, Shoss and Witkovsky talk about the importance of respecting boundaries, especially the ones their adult children create for their children. Grandparents are counseled to remember that they are not the parents. Strategies are presented for making amends if needed with the generation in between. It also outlines tactics grandparents can share with their children and grandchildren that better connect all three generations, including how to create a living legacy foundation.

For more information, or to order a copy of the book, go to grandparentsunleashed.com.