This week in Israeli history: April 7-13 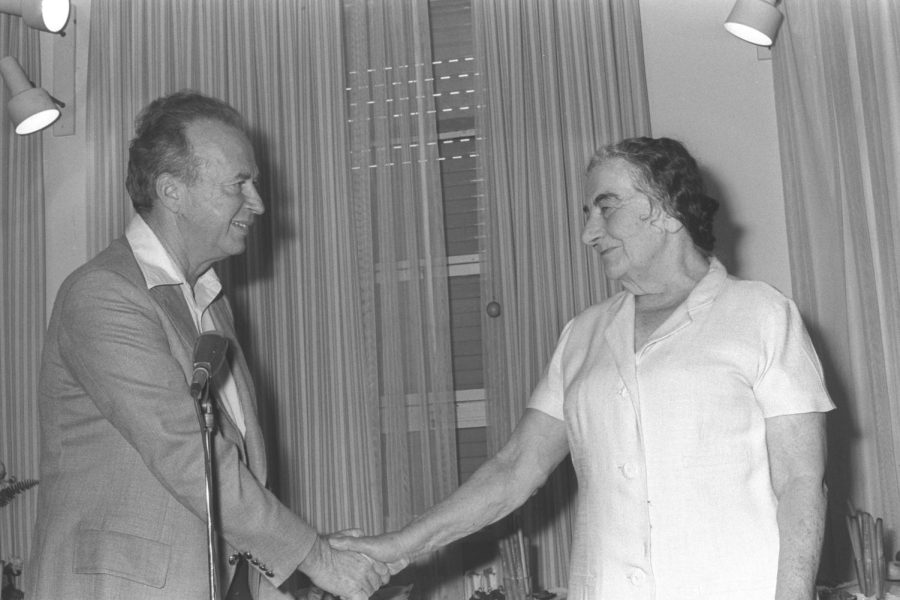 Ilanit, Israel’s first entry in the annual Eurovision Song Contest, finishes fourth out of 17 nations with the song “Ey-sham,” a dramatic ballad featuring “the garden of love.” Her result is the best for a debut nation in the contest for the next 20 years. Ilanit again represents Israel in 1977. Israel wins Eurovision for the first time in 1978 with Izhar Cohen & the Alphabeta’s “A-Ba-Ni-Bi,” then repeats the victory in 1979 with Gali Atari and Milk & Honey’s “Hallelujah.”

The fourth Palestine and Near East Exhibition opens in Tel Aviv to showcase the commercial and industrial activity of the Yishuv, the Jewish area of settlement in Palestine, and to celebrate its city’s 20th anniversary. The economic fairs began in 1924; they give way to what in 1932 becomes the Levant Fair or Orient Fair (Yerid Hamizrach). The growth of the fair leads to the construction of a permanent fairground in 1934.

Yitzhak Navon, Israel’s fifth president, is born in Jerusalem. He fights in the Irgun and Haganah, writes books and musicals, serves in positions throughout the Israeli government, chairs the Executive Committee of the World Zionist Movement, and is a Knesset member for the Rafi and Labor parties. He is elected president in 1978, then turns down a chance to seek a second term in 1983, opting to return to the Knesset. He dies Nov. 7, 2015.

Prime Minister Golda Meir announces at a Labor Party meeting that she is resigning only a month after forming Israel’s 16th government. The resignation of Israel’s only female prime minister follows the release April 2 of the Agranat Commission’s interim report on why Israel was caught off-guard at the start of the Yom Kippur War in October 1973. The report doesn’t directly blame Meir but produces mounting public criticism.

Sixty-six families gather on the dunes outside Jaffa on the Mediterranean coast to claim their lots in the new neighborhood of Ahuzat Bayit (“Homestead”), marking the founding of the first modern Jewish city, Tel Aviv. The goal is to escape the overcrowding and rising rents of Jaffa. To assign the properties, Akiva Arieh Weiss writes the family names on 66 white seashells and the lot numbers on 66 gray shells, then pairs them at random.

Eyal Golan, a soccer player who becomes one of Israel’s most successful Mizrahi singers, is born in Rehovot. He plays professional soccer from age 18 to age 35, most of it for Hapoel Marmorek, which he buys in 2014. While still playing, he releases his first album, “Whisper in the Night,” in 1995. All of his next 21 studio albums and eight concert albums are platinum sellers. He also is a coach on a TV music competition series.

Israeli Prime Minister Golda Meir meets with leaders of the Black Panthers, a Mizrahi activist group unaffiliated with the U.S. group. Israel’s Black Panthers protest the social injustice and discrimination felt by non-Ashkenazi Jews. A threat to hold a hunger strike at the Western Wall won them the meeting with Meir, who later calls them “not nice people” after a protest by 6,000 Black Panthers in Jerusalem results in clashes with the police.