The Delmar Trolley is back in the news, so let’s remember its Jewish past 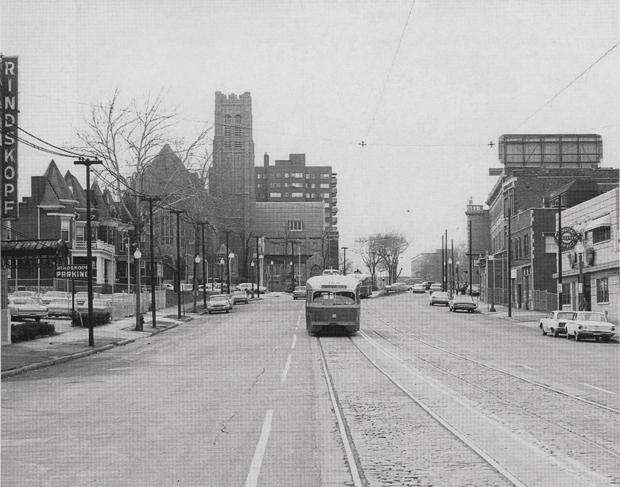 Eastbound car 1606 picks up speed on Delmar after crossing Union in April 1963. The Rindskopf Funeral Home is on the left, Thoms Pontiac on the right. This was a great spot for “trolley watching,” as the cars really flew if no passengers were in sight.

The Delmar Loop trolley is back in the news. On Monday, the St. Louis Business Journal reported the
Federal Transit Administration is threatening to take back more than $37 million in grants used to fund the idled streetcar system unless local authorities in the next two months can present a plan that restarts the trolley by June 1.

In a letter to St. Louis Mayor Tishaura Jones, Mokhtee Ahmad, the FTA’s regional administrator, said the Loop Trolley Transportation Development District by Feb. 1 must submit a plan that resumes trolley service for at least four days a week, using three vehicles. If it fails to do so, the FTA may seek to recover the $37.45 million in funding it awarded to the project between 2011 and 2015. Jones is chair of the Loop Trolley TDD, which collects a 1% sales tax in the Loop.

You may recall the $52 million, 2.2-mile trolley began its short run in November of 2018, running along Delmar Boulevard to Forest Park, and stopped running in December of the next year.

Now, according to the letter, the Loop Trolley Transportation Development District has till February 1st to come up with a plan or risk losing those millions. We’ll keep you updated as new information becomes available.
Clang, Clang, Clang Went The Delmar Loop trolley
The news reminded us here at the St. Louis Jewish Light, that the history of St. Louis’ trolleys is embedded in our own local Jewish history, as Robert A. Cohn, Editor-in-Chief Emeritus reported so eloquently back in 2012: 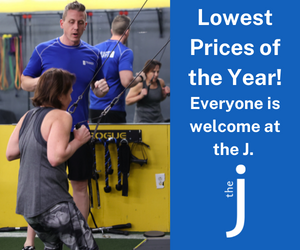 It is not by accident that two iconic musical and literary references to St. Louis trolleys and streetcars are familiar to millions: the song “Clang, Clang, Clang Went the Trolley” from “Meet Me in St. Louis,” and the title of former Saint Louis resident Tennessee Williams most acclaimed play, “A Streetcar Named Desire.”

Like San Francisco, which restored its vintage trolley lines, and New Orleans, where “A Streetcar Named Desire” is set, St. Louis’ history, geography and demographics have been shaped in large part by the streetcar lines.

St. Louisans in their sixties and older likely remember the smooth, quiet rides of the streetcars, which were much more graceful and comfortable than the lumbering, gas-guzzling buses that replaced them. Catching a streetcar in the Delmar Loop made it possible for U. City residents to go to midtown St. Louis to take in a movie at the Fox, Missouri or St. Louis theaters, enjoy a good meal along Olive Street and return in comfort—all for about 40 cents in carfare!
“Streets & Streetcars of St. Louis: A Sentimental Journey”
Young’s book shows photos of streetcars passing by the Rindskopf-Roth funeral home, the Jewish-owned Breiner’s Pastry Shop, Carl Klein’s Pharmacy, and the old pharmacy that was later taken over by Paul’s Books, a tremendous U. City landmark.

There is also a strong Jewish connection to the manufacturer of the actual street cars: the old St. Louis Car Company, which was headed by the late Edwin B. Meissner, Sr., who died at age 71 on Sept. 12, 1956. Meissner was president of the company, one of the nation’s largest manufacturers of railroad and light rail cars, and the St. Louis Aircraft Corporation. He was active for many years on the Jewish Federation Board of Directors, and served for over 20 years as President of Congregation Shaare Emeth.

The St. Louis Car Co., later known as General Steel Industries, manufactured not only St. Louis streetcars and trolleys but cars for such far-flung transit systems as the Metro in Paris, France. Meissner’s son, Edwin B. Meissner, Jr., succeeded his father as head of the company, and continues to be an active member of Congregation Shaare Emeth.

Streetcars held sway in St. Louis and its suburbs from the 1880s until the mid- and late 1940s. Young records that new state-of-the-art buses began to encroach on the streetcars domain. New streamlined streetcars were brought into service in 1946 to replace older cars, some dating back to 1903. (Edwards plans to use vintage, pre-streamlined cars for his Forest Park-U. City Loop trolley). By 1947, with the removal of eight lines, only a little more than half of the original streetcar system remained.
End Of The Track
The advent of early home TV-watching also cut down the ridership. Still, some streetcars continued to roll into the early 1960s until the St. Louis Public Service Company sold all of its St. Louis properties for $20 million to the Bi-State Development Agency as of April 1, 1963. Another 14 other local transit companies were also sold to Bi-State for another $5 million, with the whole package funded by a bond issue.

The old streetcars were phased out by Bi-State, with the last car running in 1966.