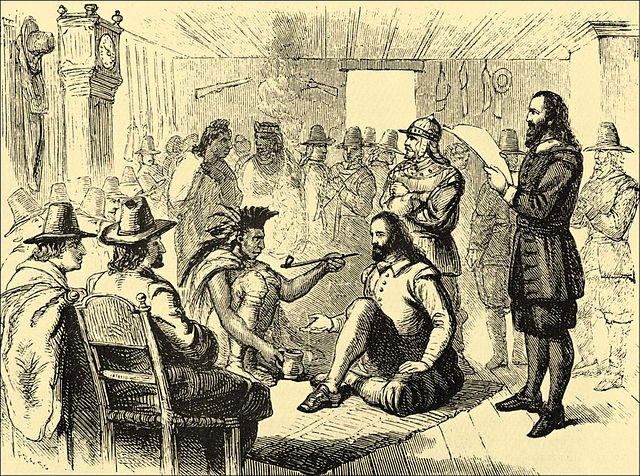 Massasoit ( leader of the Wampanoag) and governor John Carver smoking a peace pipe.

“This story was originally published on November 22nd by the Forward. Sign up here to get the latest stories from the Forward delivered to you each morning.”

Thanksgiving is positioned in the American psyche as a day of cooperation, gratitude, family, and intercommunity relationship-building. But similar to Hanukkah, for Native Americans it represents resistance against cultural assimilation. One is a holiday celebrating cultural survival and the other, especially for the Wampanoag whose first contacts Thanksgiving mythologizes, a day of mourning.

For Jews, we understand vanguarding our cultural survival. After countless imperial and colonial occupations, forced assimilations, and survival under structural violence, we have continuously rejected outside identities and practices, returning over and over to who we are as the Jewish people. But how can we use these cultural memories to assist our Native American sisters and brothers?
People of the First Light
In the spirit of the Maccabees and Indigenous resistance, we can address the concerns expressed over and over by Native Americans, most especially the Mashpee Wampanoag, the “People of the First Light” who are the central figures of the Thanksgiving myth.

It is a known fact that ‘Thanksgiving’ has not been celebrated in the United States since the 1621 encounter between English settlers and Wampanoags, let alone as the convivial encounter depicted on so many elementary school classroom walls. Rather, the holiday was established in 1846 amid attempts to instill patriotism amongst an emerging nation growing increasingly divided by slavery.

Sarah Josepha Hale, who also authored “Mary Had A Little Lamb,” popularized the holiday and established the menu as we know it (turkey, stuffing, pumpkin pie, cranberry relish) and surrounding folklore through a series of editorials in the influential “Godey’s Lady’s Book” and letters lobbying various politicians for support. Abraham Lincoln established the holiday by formal decree in 1863, promoting a caricature of positive Native-settler relations only a year after he approved the hanging of 38 Dakotas in Mankato, Minn. — the largest mass execution in United States history.

Lincoln inherited the so-called Indian Wars from the generation prior. Andrew Jackson brought the suggestion of complete genocidal extermination of Natives to the floor of the U.S. Congress. It failed only because the cost of bullets was deemed more valuable than the lives of this continent’s Indigenous peoples.The holiday was established both as a concerted public relations campaign to distract from domestic interethnic conflict and ongoing miseducation for future generations.
First Contact
For the Wampanoag, the first contact with European settlers began a multi-year pandemic that led to the deaths of a third of their population, human trafficking, and continuous violent encounters between the two populations. It also began the long and painful process of colonization — the imposition of the Christian religion, the forcing of the English language, land theft, and the criminalization of Indigenous religion, language and culture until the the American Indian Religious Freedom Act of 1978 was passed. The legacy of this country’s official policies of forced Christianization and cultural genocide is only beginning to be addressed this year under Secretary of the Interior, Debra Haaland of the Pueblo of Laguna, through the mandated Federal Indian Boarding School Initiative.

The Wampanoag routinely express regret at the mercy their ancestors showed to the starving new arrivals, though compassion is an inherent cultural value for Indigenous Peoples of this continent. In 1970, they officially established the holiday as their “National Day of Mourning,” which was supported throughout the 1970s by other Tribal Nations, Native American Civil Rights Leaders, Tribal Citizens, and intersectional activists of the time. To this day, the Mashpee Wampanoag are still fighting for civil and land rights with 300 acres having been put into federal trust under the Obama Administration (representing less than 1% of their traditional territory), and having been removed from Federal Trust under the Trump Administration so as to prevent them from developing it. This issue is yet to be resolved via Secretary Haaland’s Department of Interior.

In addition to these issues, Tribal outcomes under the COVID-19 pandemic have been outsized due to consistent underfunding and underperforming of Indian Health Services (a Treaty responsibility of the United States Government and therefore all U.S. Citizens) as well as challenges to Indian Education, managed internally and through the Bureau of Indian Education, part of the collective effort to protect and restore language and culture.
Does It Resonate
All of that should resonate with Jews, who are no strangers to the hardships and displacement of colonialism. From the time of the Babylonian Expulsion followed by waves of invaders and occupiers, we have fought across time and geography to preserve our ties to our land, culture, and each other. We keenly acknowledge the pain of this shared trauma in our days of remembrance from Yom HaShoah to the commemoration of the Spanish Inquisition. Building ourselves back to a place of restored culture, language, homeland access, and social health has been a centuries-long endeavor.

One of our collective and brightest celebrations is Hanukkah, or the miracle of lights that appended the Maccabean revolt against Greek and Syrian invaders. We collectively turn to this victory as a beacon of hope and a reminder of strength that can come under the darkest of times. It is a reminder to us how brave our ancestors were to resist forced assimilation and cultural erasure. Having been under-resourced and with smaller numbers, it reminds us that necessity creates possibility. And it is a story we turn to time and again when threatened with annihilation.

The miracle of our survival, redemption and rededication at Hanukkah can be a guiding force for our interactions with our Native American relatives. Having felt the pain of cultural, religious, and language loss, we know how intolerable that is for anyone. We can use this experience to guide how we support Natives not only through Thanksgiving, but year-round through pursuing true histories from not only mythologized, patriot perspectives. We can use expanded understanding to learn to listen to Native nations about their own needs and to critically assess what can best be levied to assist tribes’ own cultural preservation, which includes the continuance of lifeways that need to be protected against the encroachment of those who came after – lest those cultures and lifeways cease to exist due to the deadly duo of resource extraction and ignorance. To live our values as Jewish People is to ensure we are not replicating onto others, the forced assimilation and displacement we ourselves could never tolerate both in antiquity and at present.

To be fair, I don’t come from a family that held critical dialogues about the meaning of Thanksgiving or Hanukkah. I come from a Southwestern Tribe — the Tewa People — who were untouched by the Thanksgiving story directly, and Sefardim, who never fully assimilated anywhere. Thanksgiving in our home was just a day when we ate more than others and were just thankful to be amongst our family and loved ones.

Turkey is a traditional food for our Pueblo people, and growing up urban, without hunting grounds with prolific game, we got our turkeys from the grocery store like everyone else — and usually two or three because they were on sale. The rest of our meal was whatever my family felt like eating with no adherence to the standard American fare, something I didn’t experience until I was in college at a roommate’s family home in Central New Jersey. It was my first time seeing cranberry sauce not from a can, creamed onions (I still am unsure what this is!), and homemade stuffing. They went around the table and talked about their gratitudes. It was wholesome and filled with so much love. I loved being there. The mythologized story was never brought up. Similarly, many of our tribal communities, including our Pueblos in the Southwest, have big Thanksgiving family meals where no discussion of the Thanksgiving story or the fraught nature of the false history takes place.

When a community that was forcibly assimilated and holds deep traumas gets together for a celebration, regardless of the context, it can be difficult to advance nuanced conversation and not always appropriate to do so. Thinking about this in relation to our Jewish people it can be difficult to move the conversation and understanding forward during the Thanksgiving dinners that are coming up for your families, and to do so with gentleness and mutual respect. Please share histories and talking points beforehand. Gratitude is a way of life for all Indigenous Peoples and a daily practice for both Jews and Native Americans.