Why all Jews should be saying kaddish for the Choco Taco 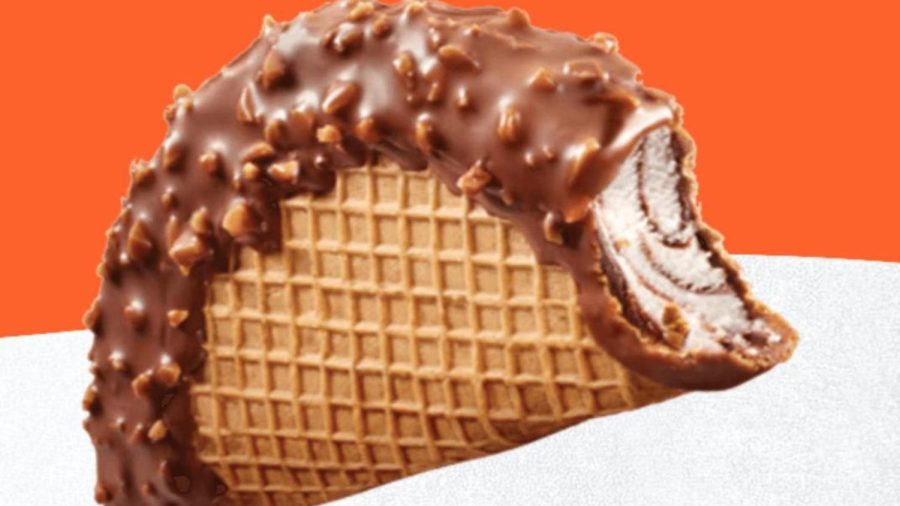 The Choco Taco was the brainchild of a Good Humor driver named Alan Drazen. Image by Klondike

By Eric Schulmiller, The Forward

In a summer, in a year, in an era of seemingly endless bad news, the announcement that came this past Monday still stung. As reported (eulogized?) by The New York Times, CNN, The Washington Post and NPR, the beloved ice cream novelty the Choco Taco is being discontinued, effective immediately. On social media, the outpouring of love and sadness was overwhelming. Horror author Stephen King, soccer star Alex Morgan, Star Trek legend George Takei, all expressed their condolences. U.S. Sen. Chris Murphy of Connecticut even suggested invoking the Defense Production Act to stave off the beloved treat’s demise.

What made this an especially bittersweet moment for me is that the Choco Taco is a singularly Jewish creation. In a broader sense, one could easily make the argument that ice cream is America’s most Jewish industry. From Steve Herrell (whose wife and business partner are Jewish), to Ben & Jerry’s, Haagen Dazs to Baskin-Robbins, our country’s favorite frozen desserts were all the product of Jewish invention, ingenuity and our collective desire to sweeten life’s often challenging path. But the Choco Taco has a particularly Jewish provenance.
Meet the inventor
Like countless Jews before him, Alan Drazen was a wandering Jew. But while Moses had the mishkan (tabernacle) and Tevye had his milk cart, Drazen drove a Good Humor truck through the streets of Philadelphia. By the mid-1970s, he was manager and ice cream truck supervisor at Jack & Jill, a family-owned business started by Mickey (Max) Schwartz in 1929. Mickey’s son Jay expanded the business, which distributed ice cream throughout the mid-Atlantic, and one fall day in 1983, Drazen realized his employer needed their own novelty item to compete with rival Popsicle purveyors in the cooler, slower months.

“I was on an expedition in Mexico and got separated from my party. It was hot. I hadn’t had anything to drink. And then I saw a mirage. An ice cream taco, rising out of the distance. That’s how I got the idea.” This was the midrash that Drazen humorously shared in Jason Cohen’s authoritative 2016 history of the Choco Taco for Eater.

Of course, the truth was more mundane, if no less brilliant — in the early 1980s, Mexican food was a hot segment of the food landscape, so Drazen decided to take an ice cream cone (itself an item of possible Jewish origin), and fold it into an ice cream-filled taco! Add some chocolate lining to prevent leakage, and a sprinkle of nuts, and Drazen had created a novelty dessert that some have called a “Mount Rushmore ice cream treat.”

To manufacture Drazen’s invention, Jack & Jill partnered with Wisconsin-based distributor Gold Bond, which was later bought by Good Humor, which had been bought by Unilever. Unilever then went on to buy Klondike, which became the parent company of Choco Taco until the announcement this week that it would be discontinued (thus making Unilever even more unpopular with ice cream-loving Jews, following the recent Ben & Jerry’s debacle).
A classic Jewish mashup
The Jewish flavor of the Choco Taco runs deeper than the religious persuasion of its inventor or distributors. The very shape and composition of the Choco Taco is emblematic of Jewish values. Jews are the masters of the mashup. As Drazen notes, “With the Choco Taco you’re getting the ice cream, cone, nuts and chocolate with just about every bite.”

As Jews, we know how to hold in our hands and savor multiple places, multiple times, or as Mordecai Kaplan, the founder of Reconstructionist Judaism (whose headquarters are also in Philly) put it, multiple civilizations with every bite of Jewish life. This approach to life dates all the way back to Rabbi Hillel. As we read in the Passover Haggadah, “This is what Hillel did, at the time that the Temple stood. He wrapped up some Pesach lamb, some matzah and some bitter herbs and ate them together.”

At contemporary seders, many Jews also add haroset to replace the missing lamb in our post-Temple “Hillel sandwiches,” thereby giving them a crunchy, sweet, nutty feel. Is there any doubt that the Choco Taco was at least partly inspired by the Hillel sandwich?

“The joy of eating them is as much about place and time as flavor,” Cohen wrote, “You can’t sink your teeth into a memory.” That may be true, but Jews will always find ways to fold the past into the present, consuming both the bitter and the sweet in every bite. The Choco Taco is dead. Long live the Choco Taco.