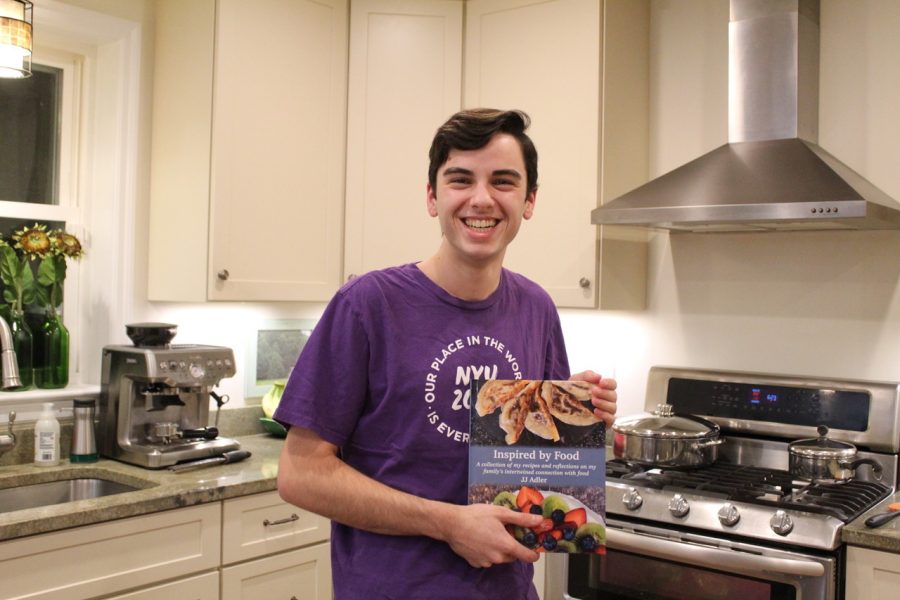 JJ Adler is the author of the “Inspired by Food” cookbook.

If you’re interested in a copy of JJ Adler’s “Inspired by Food” cookbook, which costs $20, you can email him at [email protected] A portion of the proceeds from sales of the book will go to benefit the Harvey Kornblum Jewish Food Pantry.

This recipe is special to me because it is the first recipe I ever wrote, and it is therefore fitting as the first recipe of the cookbook itself. My Dad is the one who taught me how to cook turkey. In 2017, on my Dad’s birthday, we competed as a team in a kosher barbecue competition in St. Louis, tying for second place in the turkey category. While this turkey is not that exact recipe, it is quite similar. It takes all the best factors of the competition turkey, changes them for easier cooking (in an oven in place of the smoker), and refines them to better fit the Thanksgiving feast.

Mix the salt, celery salt, fennel, and black pepper in a small bowlCut 6 1 inch slits in the skin of the turkey, but not the flesh: one on each leg and two on each breastGently lift the skin and rub with about 1 tbsp of the salt mixture per cut, and rubbing any remaining on the skinWrap tightly in plastic wrap and refrigerate overnightPreheat an oven to 350°F In a large roasting pan, combined all the carrots, celery, onions, and garlicUnwrap the turkey, place breast-side up on top the vegetables with the neck, lightly stuff the cavity with a handful or two of the vegetable mixture, tie the legs together, and tuck the wings behindCut the 6 tbsp margarine stick to dice sized cubes and place all around and on the birdLay the rosemary on top the bird and tucked into the crevices and cavityPour the chicken stock and red wine into the bottom of the panBake for two and a half hours, basting every 40-45 minutes and rubbing with the remaining margarine Lower the temperature to 325°F and bake for 90-120 minutes more, until the internal temperature reaches 170°F and the skin is dark brown and crispy Let the turkey rest for 25-30 minutes before untying and carvingIsraeli Salad

Israeli salad is a simplistic dish which is filled with perfect pairing combinations, such as the refreshing crunch of cucumber with the acidic tomato, or the sourness from the lemon with the crisp freshness of parsley. When I was young and beginning to learn about kitchen basics, I used to help make Israeli salad. Since it was all cutting or mixing and has no steps working with a hot stove, I could do the whole thing by myself. It was one of the first ways I felt helpful, productive and autonomous in the kitchen, with my Mom quietly looking over my shoulder to make sure I didn’t slice my finger.

Chop cucumbers, tomatoes, and red onion to 1/4 inch diceMince the parsley and whisk together with the lemon juice, olive oil, salt, and pepperIn a large bowl toss the vegetables with the dressingServe chilledSouthern Biscuits

Whenever I make these I bring two or three two my grandparents down the block. When I last made a batch, my Zadie St. Louis told me about his grandmother making them; she was from Atlanta, Georgia, and making biscuits was part of her Southern upbringing. Whenever she visited my Zadie St. Louis, or he visited her, he looked forward to the fresh biscuits every morning. I think my love for biscuits comes from her. Even though this recipe makes about a dozen biscuits, I can easily eat half of them. Although I usually leave the baking to (my twin sister) Tamar, these are amongst the few things I successfully bake, so the recipe goes to her.

Preheat an oven to 415°FMix the flour, baking powder, baking soda, and salt together in a large mixing bowlWorking quickly by hand, mix in the butter and shortening by squeezing, pinching, and snapping it into with the flour, forming crumbsUsing a fork, mix the buttermilk in to form a rough dough Dump the clump of dough onto a heavily floured work surface, lightly flour the top, and press into a 1 inch thick sheet, then fold over and press back to 1 inch thick sheet, 5-6 times Cut 2-inch circles in the dough by pressing straight down with a circle cutter or drinking glass and place on a greased baking sheet, just next to each other but not touching Reform the dough by pushing all the scraps together without kneading them, working the dough as little as possibleWhen all biscuits are made, bake for 12-13 minutes, until the tops are golden brownServe steaming hot, right out of the oven