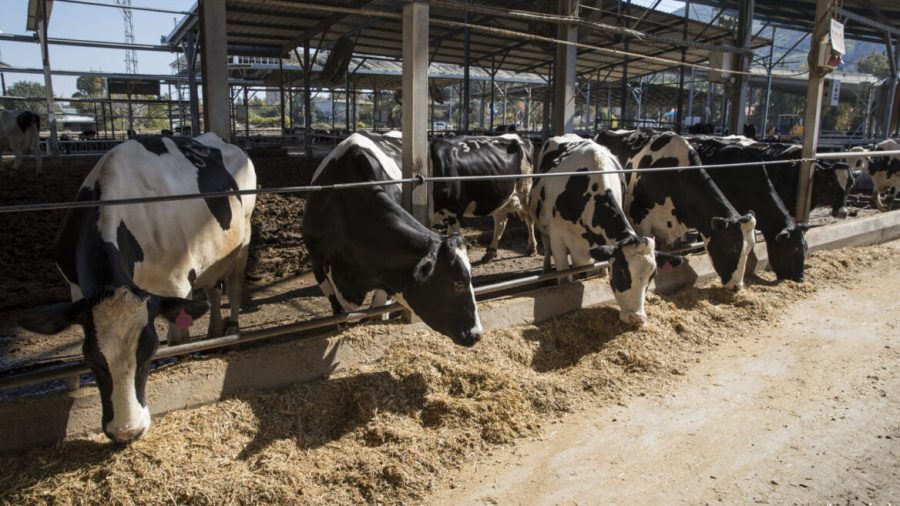 A cowshed in the Jezreel Valley, northern Israel. Photo by Nati Shohat/Flash90

(ISRAEL21c) — Unless you’re a dairy farmer, bovine mastitis is the killer disease you’ve probably never heard of. This infection around the udder is now the most frequent disease of dairy cows.

It’s costing the industry between $20 billion and $30 billion a year and contributing to an increasing number of deaths among humans that result from a proliferation of antibiotic-resistant superbugs.

The scourge of the superbugs comes from the fact that antibiotics are the main therapy used in treating bovine mastitis. The overuse of antibiotics in cows allows antimicrobial-resistant pathogens to make their way to people via the milk they drink.

Resistant superbugs cause an estimated 700,000 deaths a year around the world, with the total predicted to rise to 10 million by 2050. Costs associated with death and loss in productivity could run $100 trillion globally, according to a UK government report.

“Mileutis” is a portmanteau of “mil” for milk, “eut” from therapeutics, and “is,” Greek for knowledge.

Because Imilac is based on peptides that already exist in cow’s milk, the formulation is considered safe for human consumption.

The European Medicines Agency ruled that Imilac, which contains the protein casein hydrolysate, doesn’t require a “Maximum Residue Limit” evaluation to determine if there is a dangerously high concentration of a pharmacologically active substance from a food of animal origin.

Mileutis CEO David Javier Iscovich tells ISRAEL21c that he and his father were looking for an innovative biological technology they could build into a company. The two, originally from Argentina, weren’t thinking about cows at first.

The senior Iscovich – José – is an experienced immunobiologist who focused on the epidemiology of cancer in human health for most of his career. David worked in his father’s lab as a research assistant from a young age.

“We reviewed 14 projects in Israel and the US until someone offered us a project on animal health,” David Iscovich recalls. “We saw the results and we said, ‘Wow, this is the one. This is going to change the industry.’”

It’s a big industry: an estimated 275 million dairy cows worldwide. A survey by the US Food and Drug Administration found that 95% of dairy cows are treated with antibiotics at least once a year.

The problem of antibiotic overuse is a direct result of the growth of industrial farming, Iscovich points out. Fifty years ago, when a cow got infected with mastitis, she would be given time to rest while her immune system did its work.

But now, each cow is pumped for so much milk, there’s no flexibility to give the cow a break to get better. Antibiotics were introduced to kill the pathogen so that it does not infect the milk. Today, some 70% of the antibiotics administered in the world today are for animals.

The problem arises when pathogens learn to resist antibiotics in animals and then leap to humans. Antibiotic overrun from farms can seep into the surrounding ecosystem, which can also reach humans.

“We go to the hospital, the antibiotics don’t work, and we die,” Iscovich says bleakly. “There’s no solution.”

Overuse of antibiotics in animals has led some European countries to begin restricting their use.

Will Imalic replace antibiotics entirely? “I don’t think it will be 100%,” Iscovich says. “But for mastitis, I think we will be able to reduce antibiotic use by 90% to 95%.”

Imilac is intended to be used once a year as a preventative. A second Mileutis product in development, Milac, attacks the pathogen itself and is used if a cow gets infected during the lactation period.

Imilac has passed several clinical trials in Israel. It has received support from the Hachaklait Veterinary Services group, which has supplied it to dairy farmers.

Mileutis submitted its application for full approval to the Israeli Ministry of Agriculture in 2019 and is awaiting authorization. It is in advanced stages with regulators in the US and the European Union, as well.

In the meantime, the company has built a production line in Israel. “We’re ready to go,” Iscovich says.

In October, Mileutis raised $20 million from NovaQuest Capital Management to bring its products to markets beyond Israel. This is NovaQuest’s first investment in the animal healthcare field and its first in an Israeli company. Mileutis previously raised money from private investors.

Mileutis, which has a staff of 30 and its office and factory close to the Weizmann Institute of Science in Rehovot, has been working on its residue-free, biologically based antibiotic alternative since 2004.

At the time, there were few competitors. Now there’s “a buzz on antibiotic solutions but [other companies] are at a very early stage” compared with Mileutis, Iscovich explains. “It will take them many years to get to where we are today.”