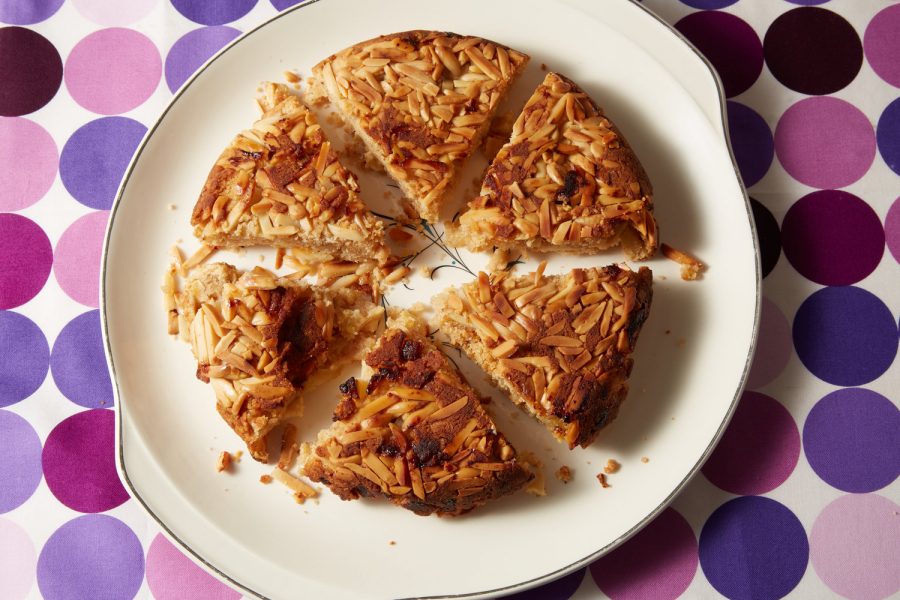 This recipe originally appeared in on Jewish Food Society and is republished with permission.
The Recipe
Serves 10 to 12
Time: 1 hour 20 minutes

2. Meanwhile, in a large bowl, beat the eggs until well combined. Add sugar and beat until fully incorporated. Add ⅔ cup oil and almond extract, and beat mixture until light and fluffy. Set aside.

3. Combine the matzo meal, potato starch, cinnamon, salt, and both types of ginger in a medium bowl and add to the egg mixture mixing to combine.

4. Place the diced apple, lime juice, and lime zest in a medium sized bowl and toss to combine. Fold into the batter, evenly distributing the apples.

5. Carefully remove the hot cast iron pan from the oven. Add the remaining oil and swirl to coat. Toss in the slivered almonds, ensuring that they are evenly spread across the bottom of the hot pan. Spread the batter evenly on top of the almonds. Bake for 40-45 minutes, until golden around the edges. Let rest for 15 minutes before flipping out of the pan and serving (almond side up).
The Recipe’s Story
Recipe Roots: Windsor, Ontario > Vancouver > Brooklyn
Shared by David Amar

In David Amar’s family, the main dish for holiday dinners and celebratory family gatherings changes frequently. At times, Moroccan short ribs take center stage, a nod to his father’s family’s North African roots. Other evenings at his parents’ home in Vancouver, where Pacific salmon is readily available, fish makes an appearance. And, in his Brooklyn apartment, at a recent dinner party, roasted lamb shoulder took the prized spot. No matter what the main dish on the table is, there’s a constant accompaniment: a sweet apple almond kugel that almost verges on dessert.

Kugel, whether it’s made from potatoes, noodles, matzo meal, or something else is a dish that easily bends to the cook’s taste and preferences. Each of the three generations of cooks who makes this recipe has his or her own take on it.

The recipe entered the family, David explains, from a 1940s synagogue cookbook that belonged to his grandmother Jeanette. The recipe, “became her own, I imagine, in the 60s… Originally, I think, it was just an apple kugel — no almonds whatsoever,” he adds. Jeanette added a powerful dose of almond extract.

When her daughter Deborah, David’s mother took on the recipe, he says, she asked “why put this almond extract?” She replaced it with slivered almonds and added candied ginger for a sweet and savory note. An experienced caterer, she used the almonds to create a tree shape atop the kugel.

The first time David made the family kugel on his own was to impress a girl he wanted to date in college. “The kugel’s impressive; I don’t know if I was impressive,” he jokes. Over the years, the recipe worked its way into his regular cooking rotation, and, like his mother and grandmother, he changed it. He added the almond extract back into the recipe. But, his most significant change was the way he cooked the kugel. Borrowing a technique he learned when he worked in restaurants, he started to make the recipe in a cast iron skillet — the way some Southern families make cornbread. The result was his own version of the family recipe with a caramelized batter and crispy edges.

David primarily makes the kugel at home in Brooklyn, but if his grandmother isn’t up to it, he will bake his version when he’s back in Canada for the holidays. Both his mother and his grandmother approve of his adaptation, but there’s still a hot debate in the family about the use of almond extract — it’s a divisive issue. “Once it comes out to the table, you can tell who made it,” David says. Each generation’s version is clearly their own.

And, if David or his mother make the kugel, it isn’t just a dinner dish. It’s always enjoyed the next morning for breakfast cold or, in David’s home, seared in butter. “I wouldn’t ever make it for breakfast,” he says. “But it would be a crime if there weren’t leftovers for the next day.”