A cheesy approach to your latkes this Hanukkah 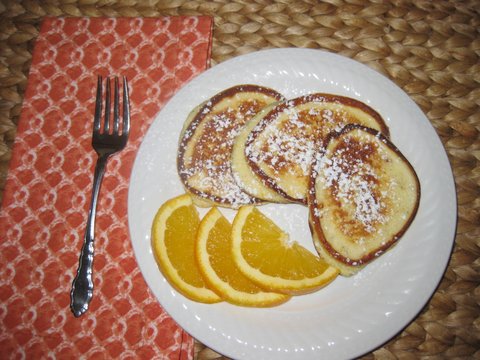 Latkes are to Hanukkah what hamentashen are to Purim. A Hanukkah celebration without latkes would be like Thanksgiving without the turkey. Moreover, a Hanukkah latke without potatoes, well, just wouldn’t seem right. Sure, there are plenty of recipes for new-fangled latkes—potato and beet, potato and apple, potato and parsnip, and even sweet potato. But most of us choose what we believe to be the traditional latke—the one made from grated potatoes.

Guess what? The potato latke is NOT the traditional latke of our people. Indeed, we can say for certain that when Moses Maimonides gathered with his family for Hanukkah celebrations during the 12th century, there were no potatoes in his latkes. Potatoes are a New World crop that originated in South America. And while my husband Mike suggests that Christopher Columbus (himself rumored to be a Jew) may have brought back a few bushels for his Bobba in the holds of the Nina, the Pinta or the Santa Maria, potatoes didn’t become a staple in the European diet until the late 1800s.

It is much more likely that Maimonides, Spinoza and our other pre-19th century ancestors celebrated Hanukkah with latkes made from cheese. And the significance of cheese?

The tradition grew out of a story or, some might argue, a parable, about Judith (Yehudit).  The Book of Judith, included in the Greek bible but not our own (because the original Hebrew document was lost), is set in the town of Bethulia in the land of Judea. It takes place during the time of the Maccabean revolt against the Assyrians.

The Assyrian army, led by General Holofernes, had Bethulia under siege, cutting the town off from all sources of food and water. The men of Bethulia despaired, knowing their days were numbered. But the beautiful Judith, a courageous young widow, created a daring plan to save her people. Accompanied by her brave handmaiden, Judith approached General Holofernes with what she claimed was secret information that would enable his army to conquer the town without bloodshed. He was intrigued by her information and smitten by her beauty.

The evening before the attack, Judith suggested to the General that the two of them get together to celebrate the plan. During that late night rendezvous, Judith plied the General with her specially prepared salty goat cheese and made sure he had plenty of wine to quench his thirst. When he fell into a drunken stupor, Judith grabbed the General’s sword and, with the aid of her handmaiden, cut off his head. She carefully covered his body in his bed and carried the head back to Bethulia in a bag. The next morning, as the army approached Bethulia for the attack, they were shocked to see the head of their general staring down at them from atop the town’s wall. In disbelief, they went back to the General’s tent and found his headless body. Horrified, they retreated.

Thus Judith saved her people through her courage and her cheese. Her story takes place around the time of the more familiar Hanukkah story, where the Maccabees eventually defeat the entire Assyrian army. The miracle of Hanukkah involves that little crucible of olive oil, seemingly enough to burn for just one day, which lasted for eight days.

The Hanukkah tradition, therefore, may originally have been the frying cheese latkes in olive oil. The more recent tradition of making latkes from potatoes was likely borne out of economic conditions in Europe when potatoes were more affordable than cheese.

In the Jewish communities of North Africa, including Morocco and Algeria, our people set aside the seventh night of Hanukkah (believed to be the day Judith prevailed) as Chag HaBanot, the Festival of the Daughters. In addition to the tradition of mothers giving special gifts to their daughters and husbands to their wives, that holiday features dancing, joyous celebrations, and, of course, latkes made from cheese.

I shared some of my research into the Book of Judith with Deborah Harris, a friend, dance teacher extraordinaire, and the Jewish chaplain for Pathways Community Hospice. She was delighted to learn about Chag HaBanot.

“It seems like a wonderful new ritual that we can bring to our Hanukkah celebrations,” she said. “It will remind our daughters, and ourselves, of the women who saved us and fought for justice. The part that stands out for me, of course, is that again, when something miraculous happened in our story, the women danced. Sarah lead us at the sea. Judith returned with the general’s head and the women danced. I would certainly want to tap into that energy, the whole body feeling its power and beauty, on the seventh night of Hanukkah.”

I couldn’t agree more. While I’m not suggesting we entirely forego those yummy, crisp, oniony potato latkes topped with applesauce, consider setting aside the seventh night of Hanukkah in your home to celebrate the courage and valor of Judith with a batch of light and delicious cheese latkes? I certainly plan to.

Both the recipes I include above are quick and easy to prepare.  Mindful of the ingredients to which our ancestors may have had access, neither recipe calls for a leavening agent or cream cheese, and both are fried in mild olive oil, the traditional oil of Hanukkah. Feel free to substitute or include other flavorings besides orange and cinnamon. You can also substitute one-quarter cup of whole-wheat flour for the same amount of white flour (the latkes will be denser), and include raisins or other chopped dried fruit. Both recipes can be halved, doubled, or tripled.

Margi Lenga Kahn is the mother of five and grandmother of four. A cooking instructor at the Kitchen Conservatory, she is currently working on a project to preserve the stories and recipes of heritage cooks. She welcomes your comments and suggestions at [email protected]