A beautiful and symbolic bread for Shavuot 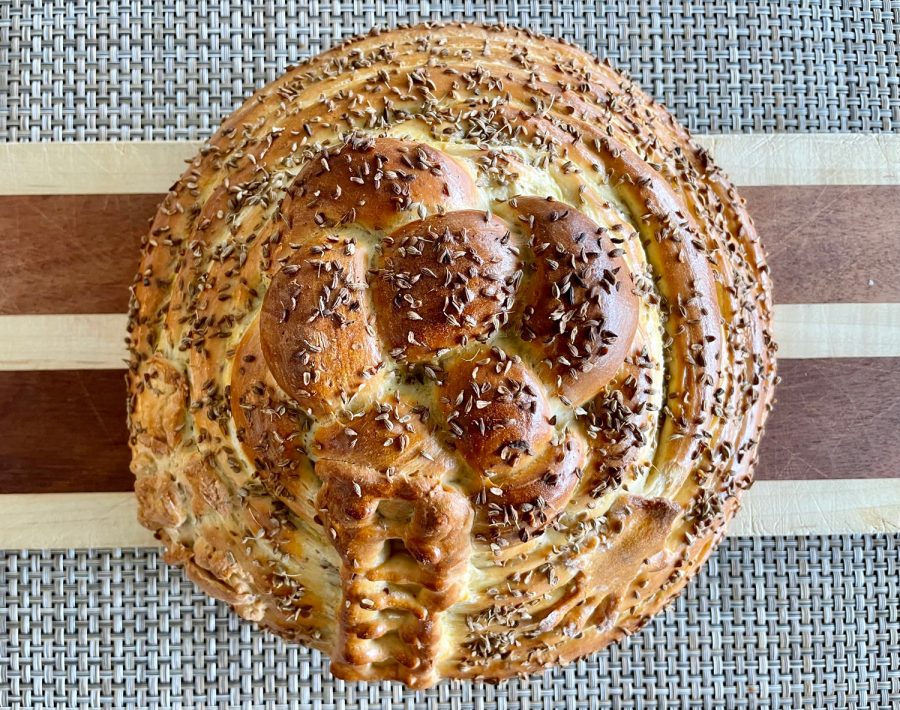 Salonika, also known as Thessaloniki, is a large port city on the Aegean Sea, the second largest city in Greece after Athens. Prior to 1942, more than 56,000 Jews lived here and had unique culinary traditions, including a remarkable bread for Shavuot that I recently discovered and describe below.

The earliest record of Jews in Salonika dates back more than 2,300 years. These Romaniote Jews, as they were called, spoke a unique language called Yevanic, a Greek dialect written in the Hebrew alphabet. In 1492, they were joined by well over 20,000 Sephardic Jews who came to Greece following their forced expulsion from Spain and Portugal. These Jews spoke Ladino, which is a cross between Spanish and Hebrew with some Turkish and Greek mixed in.

Together, living among Christians and Muslims, the Jewish community of Salonika thrived. They developed a culture rich in literature, theatre, music and poetry, and worked in many different professions and commerce. A predominantly Jewish city, Salonika was often referred to as “Jerusalem of the Balkans.”

When the Nazis entered Greece in 1941, Jewish men were sent to work camps and families were placed into ghettos. Eventually most were sent to death camps, where 96% of them, 50,000, perished. This was the city of Jews that disappeared. Only over the past few years, with pressure from survivors and the families of those survivors, has an effort been made to recognize and memorialize the Jews of Salonika and their contributions to Greek society.

The Sephardic Jews of Salonika, in addition to their own language, had an unusual culinary tradition, reflecting their Spanish and Portuguese heritage and somewhat influenced by Greek cuisine.

To learn more about these traditions, I reached out to Bob Sternberg, who served from 1985 to 1996 as the first director of the St. Louis Holocaust and Learning Center (now the St. Louis Kaplan Feldman Holocaust Museum) and currently a professor of Holocaust studies living in Phoenix. He is also the author of two cookbooks: “Yiddish Cuisine” and “The Sephardic Kitchen: The Healthy Food and Rich Culture of the Mediterranean Jews.”

Sternberg shared his vast knowledge of the foods associated with the Jews of Salonika, such as Selanlik yamurta (Salonika eggs similar to Huevos Haminados), which are whole eggs slowly simmered in a large pot filled with water and onion skins, which turn the eggshells a beautiful burnished brown color with many mottled and marbled. The flavor of the eggs is nutty, and the yolks are soft and creamy.

Other popular dishes include albondigas de espinaka (spinach and meat fritters); borekas, stuffed pastries fried or baked with a variety of fillings; a rice pudding called sutlatsh, and another called asure, a dessert made with chickpeas and nuts and other dried fruits.

A special Rosh Hashanah cake is tishpitti. This walnut orange cake includes both the flesh and rind of the oranges- very unusual.  Not knowing the history behind this cake, I made a version of it this year for Passover, substituting almond flour for regular flour. It was absolutely divine, very moist with a hint of tart orange.

On Passover, the Jews of Salonika enjoyed ensalada de maror, which is made with scallions, and bitter lettuces such as romaine, endive, and chicory. The word “maror” is particularly fascinating, as I learned from Sternberg. For Sephardic Jews, the “maror” on the Seder plate was never made from horseradish root. Rather the bitter greens, such as the ones I mentioned in this salad, were locally grown in Greece. For the Ashkenazi Jews, those bitter greens could not survive in the colder climates of Eastern Europe and thus, most Ashkenazi Jews didn’t have access to them. Hence, the Ashkenazi turned from bitter greens to horseradish for their Passover maror.

And finally, back to the splendid Sephardic bread made by the Jews of Salonika for Shavuot. It’s known as Pan de los Siete Cielos. Sternberg explained its significance to me as follows:

“Pan de los Siete Cielos is very much like a raisin challah, but the difference is the way the bread is formed,” he explained. “The center of the bread represents Mount Sinai, atop of which we received the Torah. It is surrounded by seven rings of dough. The Talmud (the volume, Hagigah) tells us that there are seven dimensions between earth and where the creator resides. Sometimes when we dream and later, when we die, it is believed that we pass through each of those dimensions.”

He continued: “On top of the dimensions there might be a piece of dough shaped like a fish which symbolizes the lack of sinfulness.  Another piece of dough resembles the two tablets of stone on which the Torah was written. The bread might also include a hand or a hamsa, with each of the five fingers representing one of the five books of Moses, and a dove as a symbol of peace. Lastly is Jacob’s ladder with 7-rungs to symbolize the ascent up the mountain, which is the connection between heaven and earth.”

In a column in 2016 for the Jewish Times of Israel, Ronit Treatman mentions the tradition of mishmar tikkun leyl Shavuot, which is the all-night study of the Torah on Shavuot. In Salonika, this unusual bread was shared by those engaged in such study.

However, even for those not so inclined, Pan de los Siete Cielos would make a beautiful centerpiece for your dairy Shavuot meal, and be a lovely way to honor the memory of our brethren of Salonika.

The bread is delicious, and so much fun to make. I hope to be able to include more of the symbols described above the next time I make it.

Margi Lenga Kahn is the mother of five and grandmother of eight. She teaches virtual and in-person cooking classes, and is working on a project to preserve the stories and recipes of heritage cooks. She welcomes your comments and suggestions at [email protected]

Step 1:  Mix the 1/2 tsp. sugar and lukewarm water together and dissolve sugar.  Add the yeast and set aside to bubble up (about 7 to 10 minutes)

Step 2:  While the yeast is being readied, place 6 cups of the flour in a mixing bowl.  I personally use my Kitchen Aid for this but lacking that appliance, it can be done easily in a regular mixing bowl.  Add the sesame oil, milk, anise seeds, eggs and salt to the bowl and mix together well.  I use the paddle blade of my kitchen aid for this.  The mixture should have the consistency of a sticky paste.  Add the yeast mixture, which should by this time be fully ready.  Keep mixing until this obtains the texture of a good challa dough.  If necessary add more flour until the dough is the correct consistency.

Step 3:  Take the dough out of the bowl and knead it until it becomes soft, moist and richly textured.  Add the raisins to the dough by kneading them in.  After the dough achieves the correct consistency from kneading, place it in a clean bowl and cover the bowl with plastic wrap.  Refrigerate overnight.  The dough will rise in the refrigerator and will be ready the next day to be kneaded again and shaped.  Have an oiled baking tin ready before you begin to shape the bread.  It is always best to keep the dough not being shaped in the refrigerator so it will not become too soft and difficult to shape.  When dough is still chilled, it is much easier to work with.

Step 4: The next day remove the dough from the refrigerator and separate 1/4 of the dough.  Put the remainder back in the refrigerator until you are ready to use it.  This piece of dough will be shaped into Mt. Sinai.  Separate 1/4 of it and set that piece aside. The rest should be divided in three parts.  Each part should be stretched into a long rope and then braided like a challah.  After braiding, take the long, narrow braided “challah” and form it into a challah “crown”, which is a round mound shaped to look like a mountain.  Tuck the bottom underneath the main piece of “challah” and lay it on the center of the baking sheet.  The other tip will be at the center of the “crown”.  Take the remaining piece of dough and stretch it out into a long rope.  Wrap the rope around and around the mountain.  This piece represents the “seven dimensions between Heaven and earth.

Step 6: After each piece of dough is shaped and placed on the “seven dimensions” rope, the bread is ready for its egg wash glaze.  Mix the remaining egg yolk with the cold water and brush the egg wash glaze over the entire bread.  Allow it to rise until double in size.  Preheat the oven to 350 degrees while the bread is rising.

Step 7: Sprinkle anise seeds over the entire bread and bake it in the oven for about 35 to 40 minutes or until it is done.  Cool on a wire rack and display and photograph the bread before cutting and serving it.  It makes an incredibly beautiful photograph.