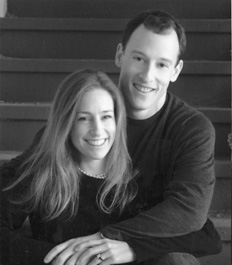 The bride-to-be is a graduate of The Pembroke Hill High School; Vassar University, where she earned a B.A. degree in psychology; St. Louis University Law School and St. Louis University School of Public Health, where she earned her MHA/JD degree. She is currently director of risk management at Research Medical Center in Kansas City. Her fianc é is a graduate of Parkway Central High School and Indiana University, where he earned a B.A. degree in chemistry, and the University of Missouri School of Medicine, where he earned his Ph.D. degree in OB/GYN. He is currently an OB/GYN with Mercy Medical Group. A May wedding is planned.

Julie Michelle Levy, daughter of Dr. Robert and Marjie Levy of St. Louis, and Matthew Todd Perlberg, son of Mark and Diane Perlberg of Palm Beach Gardens, Fla., were married June 24, 2006, at the Frontenac Hilton, St. Louis, where Rabbi Mark Shook officiated. A wedding reception followed the ceremony at the Frontenac Hilton. She is the granddaughter of Constance Levy and the late Monroe Levy, Evelyn Orenstein and the late Willard Orenstein of St. Louis.

He is the grandson of William and Muriel Perlberg of Monroe Township, N.J., and the late Max and the late Sylvia Waldgeir. Beth Goldenberg and Jackie Graves were maids of honor. Bridesmaids were Elana Charles, cousin of the bride; Alison Perlberg, sister of the groom; Jordan Newmark; Alina Hoffman and Li Cornfeld.

The groom chose Steven Perlberg, his brother, as best man.

The ring bearers were Jonah Levy and Noah Levy, cousins of the bride.

Following a trip to the Bahamas, the couple resides in Atlanta.

Valerie Nicole Levin, daughter of Bill and Linda Levin of Chesterfield, and Justin Eric Freistein, son of Peggy and Ken Brown and Larry Freistein of St. Louis, have announced their engagement.

He is the grandson of Thelma Balk of St. Louis and Harvey and Jeanette Freistein of St. Louis.

The bride-to-be is a graduate of Parkway Central High School and Bradley University, where she earned a bachelor of science degree in advertising and a minor in marketing. She was a member of Sigma Delta Tau sorority, and the marketing assistant and customer service rep for Levinson Homes. Her fianc é is a graduate of Parkway North and University of Missouri at St. Louis, where he earned a bachelor of arts degree in communications with an emphasis in theory and rhetoric. He is currently a sales manager for Buckeye International.

A September 2007 wedding is planned.