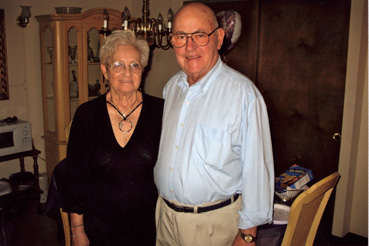 Albert and Rosalyn Sorkin celebrated their 60th wedding anniversary. To mark the occasion their children gave a dinner at Spiro’s followed by an open house for the family and friends.

They are the parents of Robert (Donna) in Maine, David (Liz) in Florida, and Linda (Jose) Gonzolas in Oklahoma.

Allison Beth Iken, daughter of Sharon and Barry Iken of Chesterfield, and Adam Stephan Lyons, son of Sherry and Bill Lyons of Deerfield, Ill., were married Aug. 19, 2006, at the Westin St. Louis, where Rabbi Mark Kram, cousin of the bride, officiated.

Following a wedding trip to Greece, the couple resides in Chicago.

A wedding reception followed the ceremony at the Tehama. She is the granddaughter of Martha Sheerin and the late Joseph Sheerin of Owosso, Mich., and Esther and Seymour Birnbaum of Delray Beach, Fla., and the late Daniel Weinstock.

He is the grandson of Gloria Sack of Little Rock, Ark., and the late Lester Sack and Eleanor Hasson of Montgomery, Ala.

Ellie Weinstock, sister of the bride was maid of honor.

Julia Hasson, niece of the groom, served as flower girl.

The ring bearer was Steven Solomon, nephew of the groom.