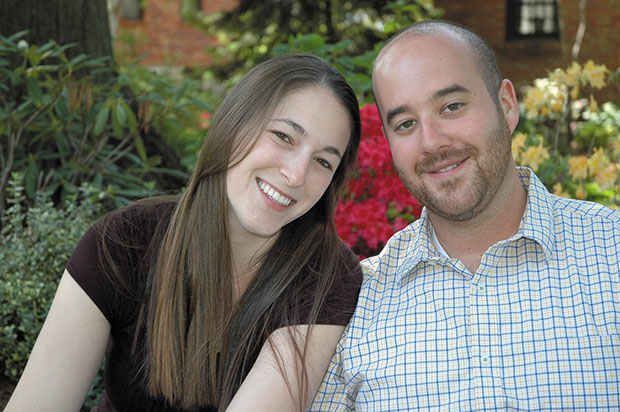 Hannah Rubin-Schlansky, daughter of Carol Rubin and Dr. Howard Schlansky, and Andrew Terkel, son of Amy and Arnold Terkel of Charlotte, N.C. are thrilled to announce their recent engagement.

She is the granddaughter of the late Rabbi Alvan Rubin and Ruth Ann Rubin, and Siril Schlansky and the late Dr. Seymour Schlansky. He is the grandson of Marilyn Kulick of Tulsa, Okla.

The bride-to-be is a graduate of Clayton High School and completed her undergraduate studies in Hebrew and Judaic Studies from the University of Wisconsin-Madison. In 2008, she returned to St. Louis and served as the first intern for Nishmah. She recently received her joint master’s degree in Jewish education and non-profit management from Hebrew Union College in Los Angeles, Calif. This summer, she will begin working as Director of Informal Education at a synagogue in Los Angeles.

Born and raised in Tulsa, her fiancé is a graduate of the University of Kansas with a joint degree in political science and international studies. Following graduation, he worked as a fellow at the Institute of Southern Jewish Life in Jackson, Miss. and is currently completing his third year of rabbinical studies at Hebrew Union College in Los Angeles. They met during their first year of HUC studies in Jerusalem, Israel.

A September, 2012 wedding is planned.